by Paul Fischer in Hollywood, California.

It would be fair to say that Nicolas Cage, Oscar winner, movie star, father, has always been obsessed with a comic book character, one Ghost Rider. He has a Ghost Rider tattoo on his person, and while many of us were doting after Batman and Superman, it was this demonic skeletal figure that has been lurking in the back of Nicolas Cages imagination since childhood. As we appropriately chat in the dark recesses of a Hollywood cemetery no less, the usually publicity shy actor concedes that this lifelong obsession - now finally put to bed as star of this months big screen interpretation of the character - has to do with its originality. "This is not standard superhero fare, which follows any of those traditional rules," Nicolas Cage explains. "As a boy I was really attracted to the monsters that were in the Marvel universal, such as the Hulk and Ghost Rider, because I couldnt understand how something so terrifying could also be good, so it appealed to whatever complexities I was feeling about life, and that paradox to me is inherently interesting."

Ghost Rider revolves around motorcycle stunt performer, Johnny Blaze (Nicolas Cage), who agrees to become the host of a "spirit of vengeance" in exchange for the safety of his true love, but the price he pays is to be cursed with the avenging spirit that takes its form at night as a demon with a flaming skull on a motorcycle of hellfire. Hardly your typical comic book character, Nicolas Cage recalls being about seven or eight when he first embarked upon the demonic adventures of the character. "I would just sit in my room and stare at the covers," he recalls, enjoying the way Ghost Rider and The Hulk looked. "But theres something about the iconography of the flaming skull itself, even going beyond Ghost Rider that has been around for thousands of years, something about the flaming skull that depicts honesty. Its like theres no mask, you cant hide, and there it is, the truth, and I like that. If youre speaking about my tattoo, I would say its more akin to that than necessarily the Ghost Rider itself." 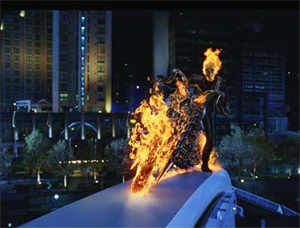 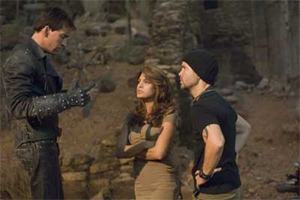 Now Nicolas Cage, 43, has fulfilled a lifelong dream by bringing the character to the big screen, and says that he was destined to play the character. "I think I willed it into happening, because here we are and were talking about it. I think I was always excited by the idea of the comic books going to film, and I knew that when the technology was at a level where it would be visually palatable to the audiences, it would make great entertainment. I had no doubt that Batman was going to be enormous, as well as Superman and Spider-Man, because its entertainment that is wholesome, full of excitement and action with not a huge body count or gunfire. Ghost Rider is different in that hes really the only character that I know of that is in the supernatural arena, and who walks through both worlds. So I thought it was time for a character like this, rather than me playing Superman, which at one time was talked about, but this is more appropriate for me because I like the enigmatic and paradoxical quality of it."

While the original comic books are tonally dark, for the film version, it was important for the actor to imbue the character with humour. "One of my favourite movies is American Werewolf in London, and one of my favourite tonalities is horror and comedy. If you can get those two together, its a great buzz, and I wanted to see if we could get that, or aspire to some sense of that. The character is absurd, its an absurd situation, you cant take it too seriously, youve got to have fun with it, and thats why I really wanted to make sure that we were playful. So I took the chain-smoking and hard drinking out and said, Wait a minute, hes trying to avoid the Devil, so instead listens to Karen Carpenter and eats jellybeans, which is fun." And Nicolas Cage had equal amounts of fun, writhing on the ground turning into Ghost Rider, reacting to the special effects that would come later. Rather than thinking the whole exercise was silly, Nicolas Cage says he felt great. "I loved it and was so excited to do it, I felt like I was a kid again and I wanted to get that spirit of a B monster movie with Vincent Price. I was going for it, as if theres bugs on my face, Im screaming ahhhh, and then I would look at playback on the monitor with Mark Steven Johnson and Id be like, Yes, monster movie, monster movie, because thats what I want to make, a movie that eight year olds and thirteen year olds can get excited about, like the way they used to about Vincent Price and The Fly in the fifties." 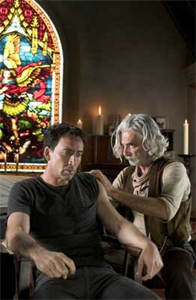 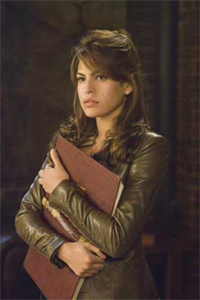 Some 50 films after Nicolas Cage began his career, the Oscar winner says that doing Ghost Rider finally reminded him of why he became an actor. "Its the fun of being the child, wanting to bring out that abandon back to a character which is very liberating, because doing World Trade Center youre really in a box, whereas in this case I could be more external and have more fun." Nicolas Cage says it remains important for him not to play any one type of character, and World Trade Center and Ghost Rider continue to define him as an actor. "Im always trying to stay interested in the work, and that means I dont want to get stuck in one style. I want to be natural yet abstract, operatic and I also want to be a ballad. I dont want to do just do one kind of character or one style of acting." Asked what challenges lay ahead for him at this point in a successful career, Nicolas Cage pauses slightly. "I have to stay interested and if Im not interested enough I shouldnt do it. I dont know how much longer I am going to do it, so I want to keep trying to find new ways of expressing myself and this is one of them. Ive not done a comic book movie before and so thats fun, and I think kids are going to love it. I want all ages to go but I really have a soft spot in my heart for the kids that go see it with their families, and I havent done that before, but I have to just keep finding things that appeal to me." He says that includes more directing, but not necessarily another Ghost Rider. "I feel like I really laid it down on this one, so a sequel would really be script dependent."

Nicolas Cage says he is not for anything just yet, but his next film, Next, is being released in late April. "Next is based on a Phillip K. Dick short story about a man who has the prescience ability to see two minutes within his own future, who he keeps seeing this girl, played by Jessica Biel, and he doesnt know why he keeps seeing her so hes got to find out. When he does he realizes he can actually see further ahead when shes there and the powers that be, like the FBI, really want this person to help them find out where a nuclear bomb has been placed and theyre running out of time. Its cool, romantic too and Jessica Biel is great in it." The actor is also committed to a National Treasure sequel. "Its still being developed and still being talked about, but everything Ive seen so far is really exciting. The history of it is interesting to me, the historical elements dealing with Confederate gold, Abraham Lincoln and the assassination is interesting. Potentially it could be even more exciting than the first one - and thats the key to sequels. You only do it if it can be as good as or better than the first." As for his break, Nicolas Cage says he has his hands full being a dad, "and I have plenty of books to read."