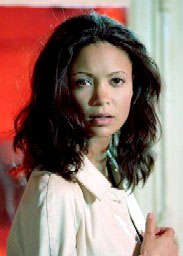 
Beautiful 30-year old Thandie Newton is very picky as to what she does. Motherhood, she says, is a strong criterion in her decision-making process. "I went to see Red Dragon the other night, and after the first five minutes, I felt physically sick and just terrified, because I genuinely felt the horror of what that was being implied. A family, children, and it's like we are able to just shut down enough of us to be able to enjoy it, or find it intriguing. I just can't go there anymore because of the fact that I'm a mother, knowing that kids are MUCH more sensitive, so I wouldn't want to do something like that."


Married to writer Oliver Parker, they have a 2-year old daughter, Ripley, both of whom were with the actress while she was shooting her latest film, The Truth About Charlie, admitting that with her family around her, in that most romantic of cities, "It's hard not to be romantic and was quite extraordinary. My husband and I had a beautiful time once when I wasn't working," she says, smilingly and she would go for "walks with my baby. The Luxemburg Gardens were just right around the corner from us, and we would go there. Whenever I felt stressed or just needed to relax, I would head to the Luxemburg Gardens because they had the most tranquil atmosphere, and I would sit there with my baby. It was in the summer so it was beautiful. To be in any city, when you are working on a film, that has a decent budget, isn't a bad thing. We had a car and a lovely guy who drove us everywhere and would sometimes take us to restaurants if we needed to. I felt like we had the key to the city."


The Truth About Charlie, directed by Jonathan Demme, is a remake of the 60s classic Charade which starred the legendary Cary Grant and Audrey Hepburn. Newton plays the latter's character in this very French New Wave remake, playing Regina Lambert, wife of a wealthy businessman whose murder on a train leads a group of would-be killers on her own trail searching for some missing money. Mark Wahlberg steps into the old Grant role of a mysterious stranger whose intentions are consistently unclear.


The trick for Newton was to avoid comparisons with Hepburn and make the role her own. "I just didn't think about it and it's only now that it occurs to me that it is obviously an issue that's of significance. It was so not significant when we were making it", explains Newton. "Demme is such a good filmmaker, why would he copy anyone else? So, I knew that it was going to be something that stood out on its own. Thus it was important for me, as it was for Jonathan, to get that, and it wasn't even to try and not do similar things to Charade, but rather: Let's just see how we go, see how it evolves, and if things come out to be the same, or if things turn out to be different it is purely accidental. I also think that maybe I was in denial about what the ramifications of doing something that had been made before, but I wasn't flattering myself, since I wasn't cast because of any similarities. I knew that by virtue of the fact that Jonathan wanted to update it, make it completely different, just depart from it totally, that in casting me, he was doing that too, departing, moving on, and you see with Mark Wahlberg, that he's so not like Cary Grant, his age, his manner, there's nothing like it."


Thandie previously worked with Demme on the commercially disastrous Beloved, which starred Oprah Winfrey. It is clear that Demme and Newton were keen to re-team. "Because we had had such a great connection on Beloved, we worked really well together, and then that was a bit of a more technical thing, before we got to know each other really well after Beloved. We also have a similar sense of humour, the same outlook on life, the same values, and friends. I think if you can work with someone with whom you work well together, but who you get along well with, and have a laugh with, that's so important."


Although Truth About Charlie is a big studio film, Newton's attraction of doing this, was "more to do with working with Jonathan again, because I knew that with him directing, it was going to be very different, and wouldn't fall into the same remake that some movies fall into." For Newton, the work, not the career has always remained of paramount importance to the actress. Hinting that she didn't particularly enjoy the Mission:Impossible experience she decided against Charlie's Angels in favour of a smaller British film, It was an Accident, written by her husband. Hollywood fame holds no interest to this intelligent Cambridge graduate, and lives with her family in London. While Jonathan Demme calls Newton underappreciated as an actress, Thandie disagrees. "I don't feel like that at all. I think there are so many reasons why people get cast, and you can't ever know those reasons or predict all those reasons and making a film is a very complicated affair. You know, it's a lot of money going into it, so if a stingy old director, isn't confident in the person that they've cast, they shouldn't go with them Whether they make a mistake with me, I never ever feel put out if I'm not getting a role, or not being considered. Like is too short to be sort of analysing what you are ultimately never going to know. Also, I am really glad the way things have worked out, and I feel like I have reached a point now where there are some things I won't do, because I am not interested in doing them."


It was the Australian film Flirting, starring Nicole Kidman and featuring a complete unknown Naomi Watts, that put Newton on the map. Still friends with both women, Newton had no idea at the time she shot that film, at age 18, that she would still continue to embrace an acting career, years later. "I think most actors feel like, God, maybe I won't be doing this next year, even though there may not be a next year."


Enjoying motherhood, Newton continues to be selective as to what she will do "If I'm going to work on something, it's going to have to be something that it is creatively satisfying, that is going to interest me, for all the reasons why you think that someone would choose anything. And, because of my daughter, I don't want to be doing everything I can, because I don't want to be away from her too much." Motherhood has obviously changed her life, she says, gushingly. "I feel very rooted. Having lived out my adolescence in this business, it's not the best place to do that, really, and having a child, was like being introduced to myself. When you have a child, you have to feel like you're the best person that you can be, because so much of what they learn is by example. And it's not like I read this, it's seems obvious but it's starling how much you throw away. How much stuff isn't important, how much, the stuff I was preoccupied with, the grievances I had, just my preoccupations, my time I would waste. Everything is very simple now, and very, much more focussed. I am not fearful of anything."