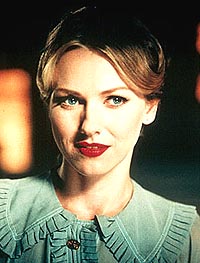 by Paul Fischer in Toronto

15 years after making a mark for herself in Australia, British-born Naomi Watts is winning unanimous praise for her starring role as a Canadian actress with stars in her eyes, in David Lynch's extraordinary Mulholland Drive. As the actress admitted to Paul Fischer during the recent Toronto Film Festival, she is FINALLY able to pick and choose her projects.

Naomi Watts is being shunted around from room to room in the midst of Toronto's frenetic film festival. "I don't even know who is interviewing me until I get to the room," she breathlessly admits. When we first met, over 10 years ago, Naomi's second feature film, Flirting, was about to be released. A complete unknown at the time, these days, at 31, Watts is every bit the confident movie actress, complete with personal publicist. "I just prefer it if people go through the correct channels when they want to interview me."

Watts has reason to be confident.

Despite roles in over 20 films shot in England, Hollywood and Australia, including the diverse likes of Tank Girl, Gross Misconduct [opposite Jimmy Smits], Under the Lighthouse Dancing and Strange Planet, it was idiosyncratic filmmaker David Lynch that took Naomi to places she had never been before. Before meeting him [David Lynch], the actress "thought he would be inaccessible; a really dark, intense, brooding kind of guy." She could not have been more wrong." He's just an incredibly charming, highly spirited human being who is great to be around, and everybody shared that opinion. He's got one of the funniest senses of humour I've ever experienced in a man. A real dry wit, but incredibly mischievous at the same time. We teased each other the whole time," she recalls laughingly.

Mulholland Drive is one of Lynch's most complex films, but also his most intoxicating. With various plot lines born out of an initial television series, Watts portrays a wholesome young starlet eager to fulfil her Hollywood dreams. She is Betty Elms, fresh off the plane from Canada, who finds herself temporarily diverted from her earnest, sparkling hopes for movie stardom by the unexpected appearance of Rita (Laura Elena Harring), the amnesia-stricken survivor of a traumatic car accident. Out of the goodness of her heart, the naive Betty guides Rita on her quest for self-discovery. This path gradually leads them to dark revelations that shake the foundations of their unexpectedly fragile reality. 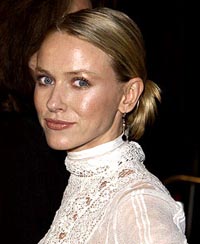 And of course, nothing in Lynch's surreal cinematic world is what it seems.

"The way David works with his actors is quite different from the normal director-actor relationship. He really doesn't tell you much about what he's thinking. I know he hasn't been divulging anything to the press [about the film], but he's the same with actors. He wants you to interpret it yourself, so he doesn't give directions. As actors, for the most part we're trained to know where we've come from, where we're going, what the truth and meaning is behind every scene, but he basically asks us to undo all that. He's saying that all those questions don't matter, that you simply treat each scene with the right mood and ideas that it needs. David guides you along, but he doesn't tell you exactly what it is or what it means, so it's up to you to make [those things] up."

Without revealing too much about the complex nature of Mulholland Drive, suffice it to say, that Watts goes through, on camera, quite an extraordinary metamorphosis, from pure naivety and good-as-gold natured, to the darker recesses of her psyche and sexuality.

In trying to reconcile the different facets of her character, Watts had a lot of questions to ask of herself, given Lynch's unwillingness to reveal much to his actors.
"I had to therefore come up with my own decisions about what this meant and what this character was going through, what was dream and what was reality. My interpretation could end up being completely different, from both David and the audience. But I DID have to reconcile all of that, and people seem to think it works."

The film begins with Watts' Betty as this wide-eyed innocent Hollywood hopeful. The actress found it difficult to identify with her "because she was so pure, good and perfect, with stars in her eyes and dimples in her cheeks, that it was too much like a cardboard cut-out of the cereal box." However, as Naomi points out, "if you look really closely at that, there's something quite psychotic about that, and you know there's another dimension, so that any time, it's going to unveil itself. Betty has this thrill-seeking sense about her."
Part of what redefines her as the film ensues, is Betty's sexuality. Watts has some graphic scenes in the film, notably with co-star Laura Elena Harring, one [a ferocious masturbation scene] more confronting and disturbing than the other. 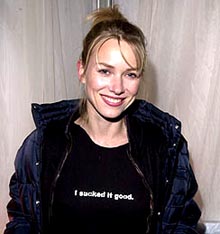 As tough as it was to shoot those scenes, Watts feels enriched by the experience, admitting to having learned a lot in the process, "and hopefully those experiences will translate to another experience with another director." Most importantly, that has to do with trust. "I trusted him 100% and it worked. I was putty in his hands and there was NOTHING I wouldn't do for him and I say that with total conviction. Unfortunately you can't do that all the time."

However, Watts' performance in Mulholland Drive has certainly made Hollywood more aware of the actress. "At least this is a movie that's being seen by a lot of filmmakers, because David is one of America's great auteurs. So I'm definitely being showcased out there with a great film and work that I'm proud of."

For the first time since I've known her, Naomi has a choice of material to choose from "and it's all very exciting."

Along Mulholland Drive nothing is what it seems. In this complex tale of suspense, set in the unreal universe of Los Angeles, writer/director David Lynch explores the city's schizophrenic nature, an uneasy blend of innocence and corruption, love and loneliness, beauty and depravity. Lynch constructs a puzzle, propelling us through a mysterious labyrinth of sensual experiences until we arrive at the intersection where dreams and nightmares meet.