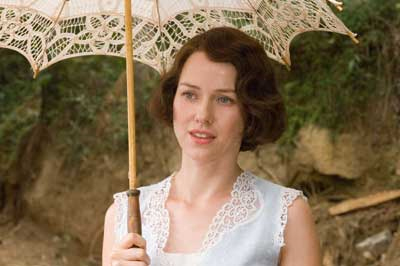 There was a time that Australias Naomi Watts, now 38, was so insecure about her profession that she was ready to give up altogether. That was then, this is now. Her professional insecurities behind her, Watts has now attained a position by which she can equate a comfortable security with the ability to take greater risks as an actress, admitting, "I think I really used to fight with myself over how to make decisions, because I always thought my next job would be my last," the actress says, curled up on a sofa in a Los Angeles hotel room. "But I have settled into a place, not a comfort zone, but believing that this is not necessarily the last thing, yet you always want to make your decisions carefully, as long as they are for yourself, not for anybody else." Despite her growing stature as one of Australias most in demand international stars, Naomi Watts has remained reticent to embrace mainstream Hollywood, last years King Kong notwithstanding. For Naomi Watts, its not budget but character that is of primary importance to her. "Yes, the character is definitely the thing that appeals to me. It is not like I am just seeking independent and obscure films, and that I am pooh poohing a studio movie, but I think it is just often the characters, directors and perhaps it the less controlled environment and the intimacy of an independent film set, that always ends up being more collaborative."

Naomi Watts passion for a particular project comes to the surface as she attaches herself as both star and producer, as in the case of the latest adaptation of Somerset Maughams The Painted Veil, which opens in select cinemas across North America in time for next years Oscar nominations. The Painted Veil is a love story set in the 1920s that tells the story of a young English couple, Walter (Edward Norton), a middle class doctor and Kitty (Naomi Watts), an upper-class woman, self-absorbed and equally self-destructive woman, who get married for the wrong reasons and relocates to Shanghai, where she falls in love with someone else. 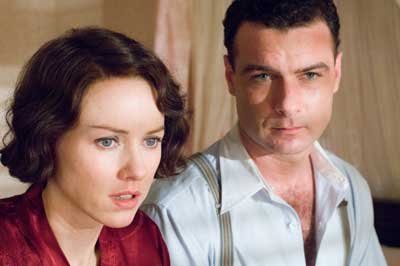 When Walter uncovers her infidelity, in an act of vengeance, he accepts a job in a remote village in China ravaged by a deadly epidemic, and takes her along. Their journey brings meaning to their relationship and gives them purpose in one of the most remote and beautiful places on earth. Naomi Watts is no stranger to playing flawed women, as she laughingly concedes that "Ive certainly played a few in my time. So now I am looking for the perfect lady, but I am not sure that she exists." Painted Veil, she says, instilled further passion in her, simply because "I think it is such a great love story, that you can really get swept up in - the fact that people, no matter what, can change. So that is kind of what you want to believe in human beings, but it is not always so easy."

It was Kittys "fantastic transformation" that she says just "leaped off the page to me. To make that really work, you have to play out those beats and that means committing to her flaws, even at the risk of losing the audience interest and writing her off as some vacuous, shallow, self obsessed, irritating person. You have to play those moments, because out of them comes something much greater which is that after the crisis she grows and finally gets into the true depth of herself, and stops sort focussing on what she thinks she should be or what she is, and actually taking in everything that is going on around her and letting her true self awaken." Naomi Watts admits that she found Kitty surprisingly easy to identify with. "I found her very human, because she thinks she is supposed to behave a certain way and thinks she is liked for these reasons, and when really those people arent necessarily liking her for those reasons. They are just on the same kind of path of self-destruction and not allowing her to grow or find herself in any way. So I think it is someone you can relate to, because she is sort of stuck and a little bit dead inside, but there is a real goodness to her." 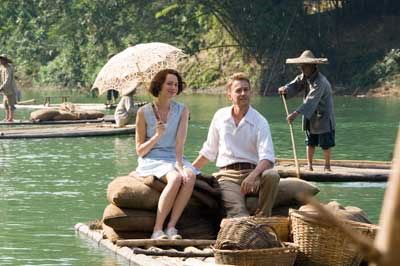 Partly the film explores the notion of family pressure and dealing with expectations that Kitty fights against. This is one facet of Painted Veil Naomi Watts does not see in her own life, despite embarking on a profession full of risk and lacking convention. "I never really felt like my family was trying to mould me into anything and when I told them I wanted to be an actor, it was never poo poohed, but t wasnt particularly encouraged either. Because there were no other actors in my family, the decision was completely born out of my own thinking, yet there were a lot of creative people in my family so for that reason, it was definitely encouraged." Naomi Watts denies being something of a non-conformist, but rather "I would say that I can reject someone trying to push me into something, but I also find myself trying to fit in a lot of the time. Yet if someone tries to tell me to fit in, I will reject it, so does that make me a non-conformist? I think from moving around so much as a child, I felt an incredible need to blend and fit in."

That nomadic lifestyle she endured as a child has further manifested itself in her work as an actor, as she travels the world, from rural China to London, for the sake of her art. "I enjoy the gypsy living, but I find it very frustrating as well." Yet the actress has settled into a new home, recently buying a house in the trendy Los Angeles suburb of Brentwood, but not even that is completely permanent. "I dont know that I want to live here forever, but I do have a home even though I guess that house could be anywhere. But the idea of having a home has really centred me as a person."

It doesnt seem that the perennially busy actress has time to enjoy her new home or for that matter return to Australia this Christmas to attend her brothers engagement party "Im just too busy working so I think Ill stay here this year". In between promoting The Painted Veil, the actress returns to London where she is the middle of shooting David Cronenbergs Eastern Promises, a political thriller in which she plays a midwife. Denying its a weird Cronenberg film, Naomi Watts sees it as "a good juicy thriller that focuses around the Russian Mafia Mobsters. It is not too weird at all, but it is not completely formulaic and a really good script." 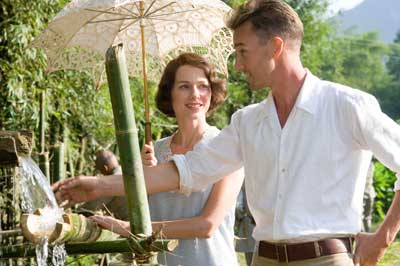 Naomi Watts also completed a new film, Funny Games, by unconventional Austrian director Michael Haneke. Naomi Watts says that her life could not be more content. "Certainly it feels pretty good to be able to jump from things like King Kong, to doing a Michael Haneke movie, a Cronenberg movie and just bounce around in all different places." But after playing so many intense characters, she says "I would like to do something lighter. I hate to think I am being repetitive. Someone said to me once that [Jean Luc] Godard said, Good film makers make the same film over and over again. Now I not saying that I am not trying to pull myself in with the likes of Godard, but if you are a creative person, you are trying to tell the story that is based in truth and perhaps the story that I am approaching is one that is not afraid to face the struggles of what it is to be a woman."