Miranda Otto Lord of the Rings: The Two Towers 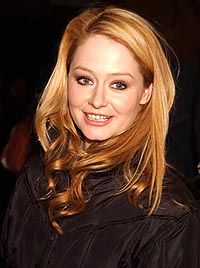 EXCLUSIVE Miranda Otto/Lord of the Rings: The Two Towers Interview.

Miranda Otto says that she is getting used to the whole Hollywood press tour. Still a little bewildered, the beautiful Australian actress is one of the new cast members to join the epic 'Lord of the Rings' trilogy. Dressed in black and sitting in a New York hotel room, Otto is fully aware that her participation in one of the year's biggest films could end up having an impact on her career, about which the 35-year old Aussie beauty has mixed feelings.

"The one thing that holds me in good stead, is that I have worked for a long time, including a lot of independent work and a lot of things that I'm really proud of, so I'm not some complete newcomer who is completely naïve about the whole business," says Otto. Insisting she has "the experience and knowledge to back it up" she says that her experience changes the way she approaches a mammoth project such as 'Lord of the Rings'. "I think if you'd never done anything like this before or are an acting novice, then it would be pretty hard because no other jobs are going to be like this one, and as I'm discovering more and more, people will try and get out of you what they want for their ends at that time."

Otto agrees that she "has to wise up a fair bit about that" but is not seeking some kind of Hollywood stardom on the back of the Rings juggernaut. Rather, the actress, who made her film debut at age 19, would prefer to "go back into a lot more independent films, which are really the kinds of films that I do and the stories that I am mainly interested in." However, that's not to say that Otto didn't get that from shooting 'Lord of the Rings'. As huge as it is, Otto laughingly describes the Rings experience as "working on a really, big budget independent film. People say that in some ways [director] Peter Jackson is very much a guerrilla filmmaker. No matter how much money was involved, there was still that sense of working everything out on the day and a real sense of chaos."

In 'The Two Towers', the second chapter in the Rings trilogy, Otto plays one of the first human characters to interact in the saga, playing the strong-minded Éowyn, Shieldmaiden of Rohan, a fiery, beautiful princess, who has to help her uncle, Théoden, King of Rohan, defend her nation from the armies of the villainous Saruman the White. In the process, she finds herself falling in love with the heroic Aragorn, who is in love with the beautiful elf Arwen.

In landing the only other principal female role in the remaining Rings chapters, Otto recalls "it was an easy audition in that I only auditioned for it once. Pete wasn't even there as he had already begun shooting in New Zealand, so I went in, put it down on tape and had a quick scene to do. I had to audition with both an American and English accent which was weird, and that was that." The actress adds that she didn't realize "the magnitude of the production that I was getting involved in and didn't know much about it, so I wasn't too nervous about it."

While director Jackson said that Otto was perfect for the role of Éowyn, the actress has no idea why that was, "though I think one thing would have to be that I could play something of another period, not to appear too modern. I guess they needed someone who was able to mould into a world that seemed to have been forged a long time ago and I suppose have some sense of period." In further describing the character's dichotomist toughness and romanticism Otto sees her "as a fighter and someone who is idealistic, who wants to live her life, not compromise and stand up for the things that she believes in as well as look after her people. Her main frustrations are that she may be led into compromising inactivity. As far as her romantic streak goes, she's been someone who's been brought up with men her whole life, so romance has never been a significant part of her life, until Aragorn and it's a little frightening as much as anything. I don't think she's a romantic, Sleeping Beauty-type character, but rather someone determined to be who she is and stick up for that," Otto explains.

This actress laughs when asked what surprised her the most about being a part of this project. "The biggest surprise I had was when I arrived and realizing what film I was IN," she recalls. "I auditioned for this in Australia, after all, not ever meeting the director or writers, being handed some scripts back to front because they had the wrong numbered covers on them, not having been able to get through the whole book in the couple of days I had to audition for it and thinking because it was in New Zealand and a Peter Jackson film, it would be something small and low-key." She never imagined that this would be a film "of such enormous magnitude, so the huge shock was when I went over and saw what they were building, saw the creatures and prosthetics. I couldn't sleep that night I was so excited, in that it was like being in 'The Wizard of Oz'." Adding, "It's a story that people hold close to their hearts."

Though professionally acting since a teenager, Otto who is the daughter of renowned stage and film actor Barry Otto [Strictly Ballroom], says that her perceptions of the profession have changed considerably since she first started. "I have different perceptions to other people because of my father being an actor", she explains. "I see how much he's put into it and I still see that there are no guarantees, that no matter how well respected you are and how much you've done, you still wait for work." But it's not just the insecurities of her profession that concern her, even now, but the added demands of her time doing publicity, especially for an event film such as 'Lord of the Rings'. "It seems now that people are more keen to give away parts of your personal life and that's what I never imagined when I got into acting." Rather, she recalls, when she got into it, "I watched my father on the stage and that's what acting was to me, dressing up in costumes, pretending to be other people and living through different lives. I remember Judy Davis once telling me: If you want to be an actor you'd better carry a briefcase, and now I see exactly what she means. This has become such a business and the people who are good at the business side of it handle things better." Otto remains dismayed at our obsession with celebrity, recalling, "that back home I've been followed by a photographer which is just so intrusive."

Perhaps this is why she remains a ferociously private person, refusing invitations to attend "a cocktail party for the latest toenail polish. I just don't want to do that stuff anymore." Once having dated 'Moulin Rouge' star Richard Roxburgh, the couple split up as Otto was due to shoot 'Rings'. "I think I was in the mood for letting out a bit of aggression on set", she recalls laughingly. While her private life at the time was in the spotlight, she hopes that the success of 'The Two Towers' and next year's 'Return of the King', won't allow herself to be entrenched in unwanted media scrutiny. "I just want to act and not let all the other bullshit get in my way," That's why she still calls Australia home.