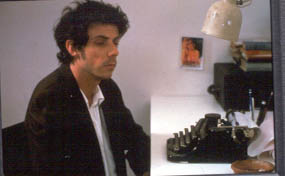 Leave out the flash and trash that goes synonymously with so many Hollywood actors. Noah Taylor prefers to take a reality check on good, bad and certainly indifferent acting roles. Unlike some actors with Hollywood at their feet, Noah notoriously chooses raw, grounded roles often found within independent films, and is choosy about those Hollywood offerings, preferring those in which he can deliver unto a genius reality. More often than not, this is under the direction of Hollywood's best, including a favourite of Noah's, Cameron Crowe, after having bloomed in roles like Roswell in Crowe's Almost Famous blockbuster. Noah, now, is seemingly unstoppable in all film genres: from The Year my Voice Broke to Tomb Raider; from Vanilla Sky to Richard Lowenstein's 'He died with a Falafel in his hand.' Whatever Noah's role, one thing is for sure, it will exude his very being.

SCENE: We're at the newly renovated Prince Circa Hotel in Melbourne's cosmopolitan St.Kilda. The latte's are on the way, the view of the esplanade on this sunny day doesn't get much better, and the company is well...let's just say average is an adjective, which should never be used to describe Noah Taylor.

Noah, you had an extra type role in another Lowenstein directed film 'Dogs in Space' (Dogs) back in 1982. 'He died with a Falafel in his hand' (falafel) is Lowenstein's work twenty years on. Drawing comparisons, would you say that Falafel is the 'Dogs in Space' for the millennium?

NT: (Lights up a cigarette) Yeah this film is 'Dogs' 10 years on. The situations that are happening in Falafel are at that point in your life where you have had enough, of all that sort of stuff. 'Dogs' is the life you lead 10 years before Falafel.

The 'grown up Dogs.' Hmm, well for those that made it through alive anyhow......Dogs saw several heroin overdoses and incredibly wild party scenes, which necessitated several ambulances.

NT: Yeah, 'Dogs' was an eye opener for me. I had an extra part in the film when I was 14 years of age. Had one line on David Bowie, but was included in many party scenes. A pretty wild set, and an introduction to sex, drugs and rock and roll. None of which I was actually getting! (smirks) They even put mouldy dishes in the sink one-month before filming, there were rats running through that house, it was sheer chaos, a fascinating set.

Lowenstein is a social historian and all his films reflect society one way or another, Strikebound, Dogs and this (Falafel).

Describe Falafel in your own words, do you find it sadly, realistic?

"Rather than sad I would say poignant. Falafel's a love story amongst friends, about family that you choose rather than what you were born into. One of the nice things about this film is the character who died was not judged for the way he died."

Housemates from Hell experiences, can you share any particularly? Are you sharing at the moment?

NT: I tend to be the worst offender!

So there's people out there with the dirt on you?

NT: (Laughingly groans) Ah yes, fortunately they're friends who have been sworn to secrecy, but no I was staying with Richard (Lowenstein), and at one stage we were doing his film school film, which was about a guy being stuck in a toilet. We were film students with no money and there ended up being about 10 cohabiting in a very small house. One person somewhere got footrot, and within 24 hours, 10 boys had rotting feet!

Alright that's seedy enough, let's move on (quickly). Where is your place of residence at the moment? Do you have various homes around the world?
"I live in London. Ah, yes, I've actually signed up to the whole capitalist pig thing, you know owning a house, bank owning a house, I have a dog, and a garden."

So it's just the London house?

NT: Yes, but I'm due for a move any month now, I've got my heart set on moving to Rome.

Yes I was about to quiz you on your love for Italy. You were quoted as saying; "it's probably the only time I ever feel completely relaxed and happy and sane, partially because it's such a disorganized place (Rome), I can fit in and appear to be quite normal and organized:"

NT: For all their disorganization they actually get things done. Look at the monuments in Rome, they build shit loads of stuff. I love Italy, you're like having a coffee, and then you realise you're in a 500 year old building. The city has a nice feel. People are together socially all the time and kids are out to 3.00am, it's so different.

Your character in Falafel writes a piece for Penthouse and gets paid 25K! Is this a publication you would like to offer your own writing skills to?

NT: Not me personally, but if I was a professional journalist and got offered 25K, which is fairly unlikely (laughing)........ I mean, some writers make a living out of writing pornography.

Stretching from pornography to romantic roles.... Yes (NT) You have admitted to discomfort with romantic roles because when your own love life is depressing, it effects you. Was that a serious comment?

NT: Well I've never seen myself as a Romeo, nor do other people. When I was single it's alright in a way because you can fall in love on one level. People go off on film shoots, as it's kind of an intense experience, then once the film is over, the excitement fizzles out.

"Once I was in a serious relationship, there's something kind of creepy about saying I love you, then make it look real and then go home to your wife. Unless I feel prepared to go all the way it doesn't feel right. "

Your musical interests have included your own musical outfits The Thirteen's and Honky Tonk Angels. Any plans for a new band in the future?

NT: 'CBM,' I have my own horrible little one-man band, known as 'Cardboard box man'. The music's for me. 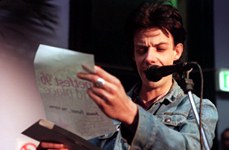 "With acting you are someone else's instrument, so for me it's like I can be a complete control freak, no one hassles you."

Have you been putting much time into your music of late?

NT: Yes, yes (enter a bad Uncle Arthur accent!) I may have a little record coming out in the next couple of months. It won't be everyone's cup of tea...Some of it's soundtrack and some just noise.

Arguably Hollywood's best actors Tom Cruise, Tom Hanks and the like tend to be obsessed with embracing their characters wholly and soley rehearsing relentlessly, are you pedantic like this?

NT: It depends on the role. Say if you are doing something biographical, that really has nothing to do with your own life so you can't draw upon your experiences, then it's a much more technical thing and you've got to research and that's kind of draining. My preference is for roles I can relate to on a personal level, because I'm interested in truth.

Is this why you like to take on Independent Australian film roles, even though you have many Hollywood opportunities?

NT: I'm not averse to working in Hollywood, it's just the way it pans out, and the more interesting scripts tend to come from independent films. Somebody like Cameron Crowe (Almost Famous, Jerry Maguire) who is main stream Hollywood is one of the most interesting filmmakers around, having worked for him on two films. 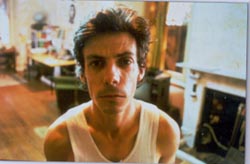 Thanks for the coffee Noah, finally can you share some inspirational words for the struggling actor, who would give their right arm, to be where you are?

"Do it first for Love. Start in amateur theatre companies, it has nothing to do with money, see if you really love it. If you want to make money get into finance, because you are not going to make a lot of money in Australia, even if you are successful."