John Travolta - Still the one they want!

Who could ever forget the first time they saw that larger than life, circa 50's flick 'Grease?' For those reading this, over the age of twenty-five, chances are you saw this smash hit translation to the big screen from the Broadway musical, as a child. It was back in 1978 when the Grease Phenomenon was just beginning, and two people were 'the word.' None other than Olivia Newton John and John Travolta, aka Sandy and Danny. 'Lets face it' - every woman on planet earth wanted to be Sandy Olsson! Why? Because she won over the blue eyed 'greaser' from Rydell High, Danny Zuko.

Off into the sky they drove, in that 'Grease Lightnin' mobile, to apparently find happiness, (like the song says) 'alwaaaays and foreeeever, chang, chang'. Off screen life imitated art, as John Travolta like 'Danny' had women swooning for a piece of their own 'Grease Lightnin.' Fast forward two decades later, and not too much has changed, Travolta might be a little more solid in stature, but at a well-lived 47, he still has 'it.' Playing his latest role in Swordfish, John Travolta is far from the inexperienced high school rebel that catapulted him to stardom, in his own words John says, 'Gabrielle' (Swordfish character) 'is a European playboy type who wants to rule the world.' Playing the sophisticated bad guy to perfection, once again the world can't get enough, of John Travolta. It's fair to say that the public have adored him inconsistently for around 20 years. Like any icon, John Travolta too has been born out of both the tough and great times. The public's affections can easily switch from love, to 'love to hate' when one becomes a mega star.

His quick rise to fame stemmed from both Grease, and his first film which had the youth of the 1970's flocking to discothèques around the world, to jut a hip, raise the opposite arm and lift an index finger full mast, fully clad in a white 3 piece suit. The film - none other than 'Saturday Night Fever', of course. 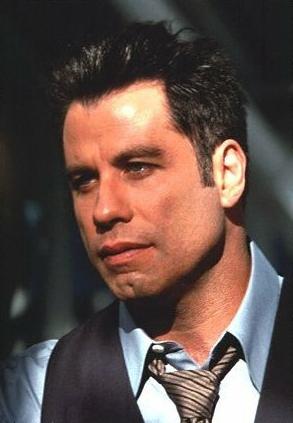 The 1980's were far from John Travolta's best film making decade, but the 1990's showcased once again his tremendous acting ability. 'Look who's talking' starring alongside Kirsty Alley and the key cinematography epic of the 90's, which gave him untouchable credibility - 'Pulp Fiction', this now meant John Travolta had three generations enjoying his talents, Baby boomers, Gen x & y.

Flying into Melbourne for the third time throughout his career, John Travolta arrived in style in his 707 Quantas Jet. The Melbourne Herald Sun headline read ' The Travolta Show hits town'

Surrounded by Melbourne's incredible skyline, this is where John Travolta is staying, Crown Hotel.
John Travolta ever so cooly enters the room and takes a seat.

Dressed immaculately in a steely blue suit that frames those oh so famous eyes, one couldn't help but notice that the silver screen sparkle, in those baby blues is real. Ignoring my 'chills multiplying',

John why do think the public can't get enough of John Travolta?

John Travolta: "Oh you Sweetheart, I don't know if that's true or not, but for the time being if that's what you say, I don't know... I can't answer that, what do you think?"

"I thought you might throw this one back at me John - perhaps its because you have been around for twenty years, and after an absence you made a comeback, people like to see that."

John Travolta: (Smiling at his handball back) "Comeback kid that's me."

"Do you ever sell your soul when you are acting, carry on with something that doesn't feel right, how do you quantify?"

John Travolta: "I think I've always been true to my goals, true to my talent. My reality about what I can do, I trust my abilities as an actor. The opening scene in Swordfish..... I knew when I read that, if I did it well, it would be the best opening for a movie, because it's so clever. If I got the right illusion to the character, made the right impact I knew it would be very powerful."

"What thoughts and preparation went into creating your Swordfish character 'Gabrielle Shear'?

John Travolta: I think you definitely have thoughts you toss around, I tested about 5 different hairstyles, facial hair, different scarves, cigarettes, even, guns, you know when its right.

"When you are preparing your character, how much research do you personally undertake?"

John Travolta: I do trust my physical acting techniques, down to, how that person who would 'walk, talk, dance' whatever. It comes from different parts of me, you choose how he is going to speak and one day when your comfortable with all those elements its like a balloon that rises, "suddenly the character arrives, its probably one of my favourite things as an actor, the collaborative day, then suddenly you have the character you know him, you can improvise with him, and you develop a conscious you didn't have before you started."

"Talking about Dance, do you still dance?"

John Travolta: 'I think I could,' (flashing smile). I usually dance for a movie if I have to, but if someone were to take me out dancing I probably could tear up a rug (devilish laughter)!"

John's publicist steps in and announces 'two more questions only'

"It's been reported that you look to Quentin Tarantino for advice, are you still seeking his opinion now days?"

John Travolta: "I think that he and Spielberg used to advise me particularly, but now it's got to the point where they trust me to make good decisions."

we all break into laughter and someone states; "Which I'm sure you are more than capable of!"

"A hypothetical for you John, if you and Olivia were invited to be reunited and make a movie once again, would you?"

John Travolta: "Well we always wanted to do 'Grease 2' and the studio denied us that right and 'so it happened (Grease 2)' laughing smugly. I think that if someone came up with a clever enough idea Olivia and I may......

"Well John you can rest assured, that no one remembers that guy's name from Grease 2 anyhow!"

His publicists steps in, and he knows its time to stand. We reluctantly break up the interview, and he leaves with one last "thank you" and says, "take care". we watch until he reaches the door and savour one of those rare moments in life when all your expectations are actually exceeded.