Still as hauntingly beautiful both on and off the screen, Kate Beckinsale has never been one to take herself far too seriously, especially playing a vampire in the sequel to Underworld. "You know, it may not be seen as an acting achievement to the rest of the world, but in my house its a major achievement," the British actress says, laughingly, adding that "my brothers think its a riot." Underworld: Evolution continues the saga of war between the aristocratic Death Dealers and the barbaric Lycans (or werewolves). The film traces the beginnings of the ancient feud between the two tribes as Selene (Kate Beckinsale), the vampire heroine, and Michael (Scott Speedman), the lycan hybrid, try to unlock the secrets of their bloodlines. The tale of action, intrigue and forbidden love takes them into the battle to end all wars as the immortals must finally face their retribution.

Beckinsale, who happens to be married to the films director Len Wiseman, says she was more than happy to have artistic input into the sequel. "It was the first time Ive ever been involved with a movie and to be part of the story process, which carried on all the way through post-production and editing," she recalls, smilingly. "I mean Len never let me get anywhere near a film until its finished, so its actually probably the only time in my life that I got to actually feel that Im in all the way through to the end. So I had quite a bit of input. Its funny, there are certain scenes in the movie where I kind of go, I thought that up," Beckinsale adds, laughingly.

The actress says that in the new film, she wanted to try and add more depth to her character. "I think the thing is in the first movie, because of the way it was structured, Selene was quite an enigmatic figure and very much didnt go into what her background, so there was a trade-off. Shes a very, very cool character but I didnt think people would empathise with her as much as you maybe did in the second one just because you got a bit more to go on. So we were both excited to have the opportunity to develop that, but I think the first movie was very kind of small, claustrophobic, and rather repressed," the actress concedes, "while this one sort of feels like we opened it up and ran with it a little bit so it was good for us." 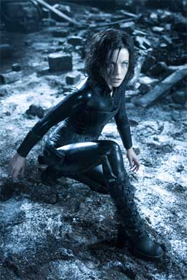 Kate admits that there are elements of Selene with which she could identify, to a point. "I think you do with all of your characters, which is the weird thing about being an actress. You can have sympathy for yourself as a serial killer or whatever it is - and you have to, thats your job and thats why were all barmy. I finished the movie thinking Im so tough and should there be any trouble on the street Im going to go over there and kick ass. Then I went home and saw my four brothers who are just stronger than I am."

Forgot about working with made up werewolves and action scenes, but shooting a sex scene with your hunky co-star while being directed by your husband, is a whole different matter, as she compares the experience to plane travel "If youre ever nervous of flying, youre on an plane and youre worrying a little bit about the person next to you freaking out, then suddenly you feel like you can handle it okay, and that was what the sex scene was like. I was a bit nervous but then Speedman was just in hell, so, I was fine. Scott had a much more tricky time just because its creepy, I think, to be fondling somebodys naked wife while the persons right there. I also think that love scenes are worse for men anyway because theyve got moveable parts which, if they move, then its terribly embarrassing, but if it doesnt move its terribly insulting and you think theyre gay. So he lashed it to his leg, tied it in three knots and... I think was in physical torment as well as everything else. So consequently I felt very free," she adds amidst uproarious laughter.

Beckinsale has a six year old daughter who is not allowed to see her Vampire exploits even though the youngster turns up in the movie, and trying to balance motherhood with a busy career, still proves a challenge for the actress who recalls explaining her busy schedule to her daughter. "I said to her Im going to be busy this week, so theres going to be some times where I cant pick you up from school. Why, what are you doing? Oh, Im promoting the movie. Dont they want to talk to me, Im in the movie." And Beckinsale says she has successfully kept tabloid gossip about her out of her daughters hemisphere. "Thats never, ever touched her. I dont know how long that goes but shes in a very straightforward school that doesnt have a lot of film industry families in it and its for very bright kids. Shes not really exposed to that and occasionally, Ill tell her that what you read is nonsense just to sort of prepare her in case somebody says something mad, but nobody has so far, so fingers crossed." 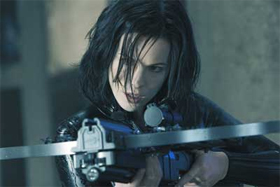 As for her own perceptions of the media attention she has been given in the past few years, Beckinsale remains philosophical on the subject. "After my first marriage and then got separated, I was still trying to figure out living and making everything cool. I actually didnt work for a year just making sure everything was cool there. And it bothers you so much more when youre not working because the whole point of being an actress is that youre enjoying the acting and what youre doing. So if youre only having people saying horrible things about you and taking photographs of you and not actually acting its torture. But If youre doing stuff that you really enjoy and its going well you can go, okay, thats kind of one of the side effects of the job."

While Beckinsale has had her fill playing vampires, she is decidedly non-action in her next movie. "I just did a movie called Click with Adam Sandler. Christopher Walken is in it and David Hasselhoff and I think thats going to be really fun. And now Im going off to do a very small drama with Sam Rockwell."

Its clear, that Beckinsale has left her recent tabloid past behind her and says that she still gets much pleasure from acting. "I love the actual real work. I think theres a part of you that never quite has to grow up, so youre always make-believing, pretending and being creative. I really do love all that stuff. Its probably infantile, but I dont want to analyse it."