Jeanne Pratt The 2013 Victorian of the Year Interview 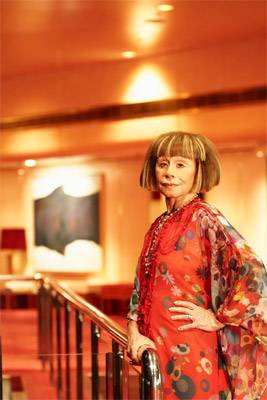 Jeanne Pratt The 2013 Victorian of the Year Interview

The 2013 Victorian of the Year was announced along with four other awards for outstanding public and community services, during the Victoria Day Council Awards ceremony at the Melbourne Town Hall. Victoria Day 2013 marks the 162nd anniversary of the official separation of Victoria from New South Wales and the formal proclamation as an independent State by Governor La Trobe.

This momentous occasion was re-enacted outside the Melbourne Town Hall today; giving award winners, dignitaries and passers-by a unique experience of Governor La Trobe's Proclamation of Separation and a traditional flag-raising ceremony to mark the occasion. Later, at a formal awards ceremony in Swanston Hall, the Victorian of the Year and other award recipients were presented their awards by the Right Honorable, The Lord Mayor Melbourne, Robert Doyle.

Victoria Day celebrates Victoria's independence and the rich history it has enjoyed since separation from New South Wales on 1st July 1851, 162 years later; Victorians are still enjoying the benefits of this occasion.

Victoria Day awards those individuals and groups who have made significant and valuable contributions to Victorian communities. The Victoria Day Council has the acknowledgement and encouragement of the Victorian Government and the Governor of Victoria.

Jeanne Pratt is the widow of the successful industrialist, Richard Pratt. She immigrated to Australia in the 1930's following the onset of Nazism in Germany (her family had originated in Poland). Jeanne was educated at Sydney Girls High School and at Sydney University. She was a career journalist for some years and as well as working in the print media (Consolidated Press, from 1959), she was a journalist in GTV9 current affairs. Later she was a regular in the program 'No Man's Land" from 1975 to 1977. She had maintained her interest in the Arts which stemmed from her background in Europe and her involvement in University theatre.

Jeanne Pratt has been an important beneficiary of the Arts for more than thirty years. Her particular interest has been live theatre but she has also supported non-theatre areas such as fine arts and arts education in schools.

Jeanne has been on the Board of the Arts Victoria for more than twenty five years. She has been a keen promoter, not only of Art Galleries but also of theatre, youth theatre and opera. In the past she and her late husband have personally been involved in amateur dramatics and related activities.

She has been a member of the artistic advisory board of her Majesty's Theatre since 2003. A life governor of the Opera Foundation of Australia and was a member of the Opera Council of Australia from 1995 to 2000. She is a member of the Australian War Memorial Advisory Committee and on the Executive Committee for the National Centre for Women and was the inaugural Director Montefiore homes for the Aged (1993-2000). Jeanne was on the Board of the Open Family Foundation from 1992 to 2000 and was a trustee of the Epworth Medical Foundation from 1985 to 1992. She was a Patron of the Lilydale Museum and she is also Patron of the Cat Protection Society of Victoria. Jeanne is also on the National Council for Christians and Jews since 2006.

Jeanne won the Variety International Humanitarian Award in 2004, won the Woodrow Wilson Award, 2004 and in 2002 was made an AC in the Order of Australia.

Question: How does it feel to be announced as The 2013 Victorian of the Year?

Jeanne Pratt: I'm very excited as it was much unexpected. It feels fabulous!


Question: What does this title mean, to you?

Jeanne Pratt: I believe the title means that I feel as if I've got to work harder.


Question: You've made various contributions to the Victorian community; which of those has been your favourite, over the past twelve months?

Jeanne Pratt: The Production Company has Gypsy, the musical starting on the 10th of July with Caroline O'Connor which is very exciting. I've been running The Production Company now for fifteen years and this year we won eight out of the nine, awards for musical theatre in the Green Room Awards beating the Opera, the Ballet and the other commercial productions which I feel chuffed about that.

Also, the other nice thing that happened as a means of injecting money into The Production Company is that I've invested in a Broadway show which also received six awards which will run for six years and that's all good news. There are many exciting things that have happened so far and I'm still waiting to win a flag at Carlton.


Question: Why is it important, for you, to give so much of your own time and success to the Victorian community?

Jeanne Pratt: It's nothing I ever set out to do, mostly I get asked to do things and then I do them. People always ask me -What is your favourite project?' but the answer is always whatever I happen to be working on, at the time. We are forever working and Carlton is still a work in progress and of course I am the co-chair of VISY and we recycle and make paper. VISY is the largest exporter of containers from Australia of any nature and I am very proud of the fact that we are the world's largest private packaging company and that was started in a little shop in Brunswick Street.


Question: How important is family, to you? Is it rewarding to work with your son at VISY?

Jeanne Pratt: Absolutely, Anthony Pratt is the Executive Chairman and I'm the backseat driver (laughs). I'm learning from him and of course he had a wonderful teacher in his father, who was an extraordinary man. Family is very important to me – family and friends are everything and I am blessed that I have wonderful family and wonderful friends, I appreciate them.


Question: How do you find the time to contribute to so many different aspects of the Victorian arts community?

Jeanne Pratt: I can't answer that, I don't ever look back or forward, I keep concentrated on what I'm doing at the time and I do things one by one as they come up. I am very fortunate that I have two grandchildren living with me because Anthony and his wife live with me when they are in Australia however they spend a month here in Australia and then a month in America. It is a very busy household and a happy one!


Question: How do you hope to use the title of The 2013 Victorian of the Year to help continue your support of various communities?

Jeanne Pratt: I am going to announce what I'm hoping to do, later on.