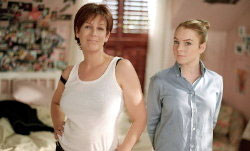 Jamie Lee Curtis has no fears about telling it how it is. Outspoken, funny and unpredictable, when she's not starring in the new Disney comedy Freaky Friday, she's writing children's books and even dissing some of her least memorable past efforts. PAUL FISCHER met up with a very loud and feisty Jamie Lee in Los Angeles.

Jamie Lee Curtis doesn't work as often in front of the cameras as she once did, but then she doesn't need to. Children's book author and mother, Curtis doesn't need to work for the money, something which she may have once done. These days, she'll look carefully before doing something like Virus, for example, a real monstrosity of a film she did in 1999 and one which she still hates. "Virus is the worst movie I've ever been in and it wasn't that I thought a lot about it except that is was a piece of shit as I was making it and I kept on asking myself: How could I get out of it, how long was it going to be and how bad was it going to be? It was just dreadful." She describes the experience as "horrible and a low point for me in my life." But since her debut in a 1977 episode of Colombo, Curtis has enjoyed a diverse career, from Halloween to a Fish Called Wanda, the Australian thriller Roadgames and the recent Tailor of Panama, to name but a fraction of her 50 plus film and TV appearances. About to be seen again in the kid-friendly Disney charmer Freaky Friday, Curtis can afford to be selective, but doesn't see it that way, denying that she has taken a break between films. "I've never taken breaks, but I work when I get something offered to me that fits into my life." And that was the Disney remake of Freaky Friday, in which she plays Tess, the conservative mother of a rebellious teen daughter. When the two start to clash over everything, they mysteriously swap personalities into the other's body, living each other's life until they learn to understand each other more. Annette Bening was originally cast as unflappable mother Tess but dropped out when the film's comic tone was lighter than in the original script. The filmmakers had little time before casting their net over Jamie Lee. "I didn't decide to do this movie, but rather it decided for me. I truly had no intention of doing a movie. I was in the middle of a book tour, having just released my 5th children's book. I was in New York City, in a hotel, when my phone rang in the middle of the night." It makes one believe in Fate. "This dropped into my life like a joke because if it had been in any other city it would never have happened or at any other time it wouldn't have happened. But because it happened when it was, they didn't need me until the September 14th. I could finish my book tour it was all in LA. The first day shooting was at Pally High School, a block from my house. I mean, it just fell into my life and was done before Christmas. They gave me the days off that I needed for volleyball games. It will never again happen like that," says the actress.

Distinguishing this 2003 update of the classic seventies comedy which starred a teenage Jodie Foster, Curtis says the new film has a different tone, and the actress was able to bring a certain reality to her character. "I thought the original script was kind of zany, so when I first met Mark my big notes were already stuff that he was addressing in the new rewrite, because tone in these kinds of movies, can be tricky. That's what's tricky. If you're playing a farce like the first movie was, you can't ever ground that movie. That's just got to be a helium balloon flying around and being really silly with people with helium voices, but, if you're doing a fable, which is what I think we made, then you actually have to have touchstones all the way through the movie, of reality." Curtis adds that what she felt she brought to this film was a grounded reality, avoiding making fun of her psychologist profession. "So instead of making fun of her profession, I said 'You know guys? I've never met one of these people anywhere in the world, so why can't we give her a real job? Can't she be a shrink? Can't she be a shrink on the west side of LA and have real patients? You know, we're not going to be talking about really serious issues, but at least we're going grounded in, so it's a real practice. She's a real doctor and does a real job.' So I tried to bring that because then I think you can actually pop the popcorn of the comedy out of it and still have a place to make the movie work."

Amidst the film's comedy, Curtis, who can relate to her character's relationship with her daughter, says that this Freaky Friday has a definite moral message. "I think that the movie is just trying to say don't judge the other experience before you walk a mile in my shoes." In fact, concedes the actress, doing the movie helped her understand her real teenage daughter. "I learned to not judge my daughter and anything that she does, that her experiences are hers and that I have to walk a mile in her shoes before I can make any comment about those." That doesn't necessarily stop her from scrutinizing her choice of boyfriends, for example. "I scrutinize everything because I'm a Mommy, but I have a daughter with an incredibly good head on her shoulders and one that is cautious. I've got a daughter who is smart and makes good choices and consistently makes good choices, so the whole idea of raising a teenager is to let them go," Curtis says. "The whole goal is, by the time they walk out the door that you feel that the person who set out that path is a conscientious human being, so you have to let them try stuff. I believe that you need to start from the beginning, letting them go, incrementally and then as they make the right choices, support their right choices by giving them more choices and then more choices. My mantra is to make good choices."

Curtis knows what her priorities are these days, and being a movie star is hardly on top of her list. "My family is obviously my priority. I have my 2 children who are the focus and a great, great, great pleasure of my life as is my husband. I'm also very close to my parents. Then I have my women friends, big oestrogen posse and then from that then the work world and the charitable world and trying to do something bigger than just myopic and kind of opening it up a little bit." Perhaps that is why Curtis began to write, as a release from the more myopic world of acting. "I didn't really start writing; I just wrote," she explains, adding that she just wrote something down one day that made her laugh. "My daughter came in and boasted of her past and she was 4 years old and it made me laugh: A 4 year old's memoir of her youth. So I wrote that line down on a piece of paper, then I just sat there going: All right, when I was little, I da,da da,da da," and then at the end of it I realized it was a book." Now writing her 6th book, Curtis says that her process "is divine inspiration. I don't try to write, the same way I don't try to act; I just do it and I wait until the idea comes and then I go 'Oh'. "

Since completing Freaky Friday, Curtis says that she is content to raise her children, work on her writing, and concentrate on her priorities. "I was never overly driven. When I started out, I was an ambitious actress because I wanted to work. Even then I never fought as hard as most of my contemporaries," she says, adding that "making movies is no longer a priority in my life." But at least we still get to see her strut her stuff with such effortless ease as Freaky Friday.