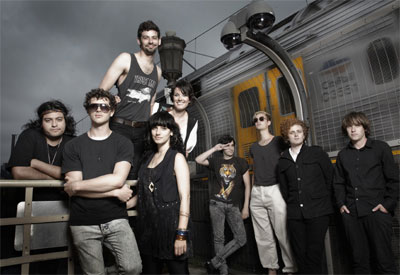 Hoops DJs are going to keep the Bacardi Express crowd entertained between sets, the three ladies, Anna Lunoe, Ninalasvegas and Bad Ezzy are the ladies who are giving Australian DJing a serious makeover, with lipstick and bling. We caught up with DJ Bad Ezzy from Hoops about Bacardi Express…

Everyone is making a big deal about you being three girl djs, how does this make you feel?

DJ Bad Ezzy : Well really we're just 3 djs! The fact that we're girls isn't such a big deal. We kind of hope people like us for our shows and music rather than just because we're girls.


What excites you about the Bacardi Express tour?

DJ Bad Ezzy : Being to play a bunch of shows with some great bands and finally finding out what crazy stuff really goes on the train....


Was there a moment when you knew you had made it, in your industry?

DJ Bad Ezzy : I don't think any of us have ever really considered if we've "made it" or not to be honest. We just have fun doing what we do. It's definitely exciting and gratifying when we get asked to play with an artist we really admire though!

DJ Bad Ezzy : Sex, drugs, rock n' roll? We've all been involved in the music industry for a while in different capacities before we started Hoops, so there wasn't too much that could shock us.

DJ Bad Ezzy : I think all 3 of us have eclectic tastes and would definitely be listening to things you wouldn't expect us to be listening to in downtime. Talking Heads, D'angelo, Qtip, pixies, Pavement, Earth Wind and Fire, Radiohead etc etc


What is your favourite part about performing live?

DJ Bad Ezzy : The massive adrenalin rush and seeing the crowd getting into it.


All aboard the Bacardi Express. Australia's only touring music festival on rails just got a whole lot bigger! Five bands, one train, four cities... one hell of a ride! The Bacardi Express has announced Groove Armada are joining British India, Bluejuice, Van She and Lost Valentinos with special guests Beardyman and Hoops DJ. Bacardi Express will take the bands on a rock and roll adventure from the 26th of March till the 28th. Playing non-stop music at exclusive concerts in Melbourne, Wagga Wagga, Wollongong and the final in Sydney.

Bacardi Express organisers are thrilled with the lineup as the line up is such a good mix of genres and all performers have a great attitude and stamina for the 48 hour long journey.

There are 12 seats up for grabs on the Bacardi Express tour and you can win by entering the promotion on www.bacardi.com

Channel V will air Bacardi Express on the 15th of May.