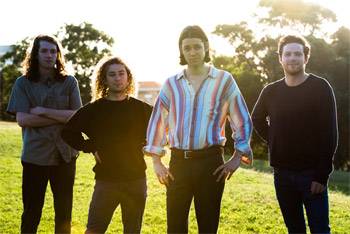 Sydney's guitar-pop heart-throbs High-tails are hyped to be hitting the road in support of their latest single "My Heart". The ten-date run is their biggest-ever headline tour, taking in towns from Toowoomba to Adelaide including a stop in their former hometown of Wagga Wagga!

Showcasing the bands increasingly sophisticated pop smarts, "My Heart" premiered on Tone Deaf, who called it "addictively upbeat". I Oh You awarded it their Froth Of The Day and labelled it "an expertly-crafted pop journey", while themusic.com.au summed up its ingredients with "add handclaps, deliver with a falling-down-the-stair energy, and the kids are proving to be alright". The song namechecks the world's most elegant destinations - New York, Champs-Élysées, and um ... Hurlstone Park.

Front man Nicholas Griffith says "We started writing it when I came back from a holiday in Europe, and a lot of the lyrics reference the travel experiences I had. A girl I'd been staying with in Prague made me a paper crane before I left for France, and I was reading "The Catcher In The Rye" while on the road which inspired the line 'Nobody knows where the animals go to when New York is frozen'."

The song is a taste of High-tails' forthcoming debut album, which the band have been busily writing and is on the way in 2016. It follows 2015's previous smash "Information", which was a staple on triple j and public radio alike.

On the live front, High-tails kept busy in 2015 - playing headline shows across the country as well as national support runs for Philadelphia Grand Jury and Jamie T, plus slots at Sydney's inaugural King Street Crawl and the Rolling Stone Live Lodge. The AU Review called recent a performance "damn enjoyable ... the group have plenty of talent in them". The band farewelled 2015 as part of the Lost Paradise Festival in Glenworth Valley on New Year's Eve. This will be High-tails' final tour before they bunker down to record their debut album, and will find the boys road-testing lots of new material. Come for the hits, stay for the bangers! Supports announced soon. Dates and ticketing info below.

Question: What should we expect from the upcoming tour?

Nicholas Griffith: We've been working on a lot of new material. The songs we've been writing are very groove based with soul and R&B-style vocals. Really quite different from anything we've released before. This will be the tour to road test these new songs so we're hoping our fans connect with this new sound we've crafted.


Question: How would you describe My Heart?

Nicholas Griffith: 'My Heart' is a rhythmic and punchy number. As a song we've been playing for a long time it still has more of that vibrant youthfulness one may have heard on our EP. Lyrically it tells of my travels in Europe and in a way is a memoir about a friend I met in Paris.

Nicholas Griffith: It's hard to pinpoint what drives a musician to work so hard. I think we know that we can get a lot of satisfaction from creating music. I guess positive feedback and knowing that people are enjoying your art is very inspiring. I also like to get inspired from "rockumentaries" like the Tom Petty one 'Runnin' Down A Dream'.

Nicholas Griffith: Bobby Womack. It's quite a mixed bag of influences that we're drawing from.

Nicholas Griffith: We're almost due to hit the studio and knuckle down on recording this new material. We might go sort of quiet for a while during this process but we're hoping to come out with something we love and the world loves too - our debut album.

Nicholas Griffith: It's hard to remember. I started at a really young age. My parents bought me a drum kit when I was eight and from there my infatuation basically spiralled out of control.

Nicholas Griffith: There are always challenges. And I wouldn't consider us at point of "musical success". From where I stand we're still working really hard to move forward. I have two other musical projects I work on day to day and the hardest thing can be to stay productive and stay on top of everything especially when you have no real job or income.

Nicholas Griffith: I wake up around midday, have a coffee, some eggs, spend a couple hours writing emails. Then I push my mattress up against the wall in order for the guys to bring their instruments into my room so we can jam. We play our live set, maybe write some songs. By that time I'm not opposed to the idea of a beer.

Nicholas Griffith: I have a collaboration to begin soon with an awesome Sydney artist who's music I adore but I ought not to give it away too soon. Sorry :)

Nicholas Griffith: I'm not the right guy to answer that question.

Nicholas Griffith: I don't really think we have a message at this point. We're not really the kind of band that has a secondary agenda. But a good old fashioned "thanks for your support" would be far from insincere.