GANGgajang Circles In The Sand 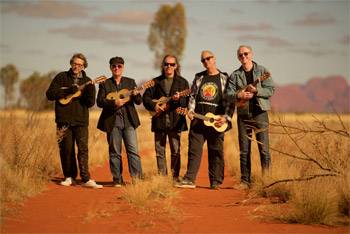 GANGgajang Circles In The Sand

Iconic Australian band GANGgajang has released a brand new single, Circles In The Sand, complete with a striking music video shot in front of majestic Uluru.  In doing so, they are the first band to be given permission by the traditional landowners to shoot a music performance video at the sacred site.

Circles In The Sand is the Gang's first new single in more than a decade, and the first release since the passing of original member Chris Bailey in 2013.  The remaining four original members Mark 'Cal' Callaghan, Graham 'Buzz' Bidstrup, Geoff Stapleton and Robbie James, along with bassist Peter Willersdorf, have returned to the studio to deliver a single that takes us back to where it all began. It reminds us once again who we are, where we live - and in doing so offers a glimpse of a different, more inclusive future.

The video was shot by filmmaker Chris Tangey and edited by Phil Evans, and features singers, Dani Young and Indigenous icon Warren H Williams, singing in Arrernte language.  The band's connection with Jimmy Little Foundation and Uncle Jimmy Thumbs up!, along with their work in the Mutitjulu community near Uluru, ultimately led to the shoot being approved, explains Buzz Bidstrup.

'I have been travelling to and working in the community of Mutitjulu, next to Uluru for over 15 years, so I have a lot of friends there. When we wanted to make the clip the traditional owners were the first to give their permission. A big thanks to them and the administrators of the community and also to the media officer from Parks Australia who also had to give their permission for us to shoot the clip".

Circles In The Sand was written by Graham -Buzz' Bidstrup and Geoff Stapleton, the co-writers inspired by the Pintubi 9 and the painters of the Western Desert who drew sand paintings that eventually became the modern 'dot painting" revolution.

GANGgajang has been part of the Australian pub music landscape since 1984; the band's self-titled debut album dropped in 1985 and contained the hits Gimme Some Lovin', Giver of Life, House of Cards and the perennial Sounds Of Then (This Is Australia).

These singles climbed the charts to become part of the music revolution reinventing the Australian sound: a sound based on our stories, our places.  GANGgajang is now regarded as one of the all-time classic Australian albums, while Sounds Of Then has reached near mythical status and continues to connect with new generations of Australian music fans to this day.

Circles In The Sand will be added to a totally remastered release of the album GANGgajang, confirmed for April 8.  The album will include a second new track, Not Waiting Around.

GANGgajang will then hit the road through April, May and June, playing live everywhere from Gladstone to Perth – tour dates as follows:

Circles in the Sand Tour