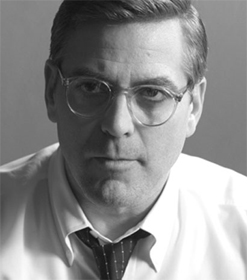 George Clooney may be the director and co-star of his matter-of-fact exploration of newscaster Edward R. Murrow in his black and white Good Night and Good Luck, but when meeting the press, the always charming actor comes prepared with a quip, despite being late for his appointed interview. "I was shooting crack up in the room. I'm sorry I'm late," Clooney says, with typical laughter in toe. Here is a star in the true sense of the word, an actor who consistently knows how to ingratiate himself to the press, even when hes promoting a tough film as this, his second stint as director. The son of TV news anchorman Nick Clooney, the actor has always had a strong interest in this world, a world he was raised in the midst of and, in terms of American journalism the most respected man in the history of television news was Edward R. Murrow. Good Night, and Good Luck, the title of which refers to the sign off phrase Murrow would use to end his broadcasts, finds Murrow at the foremost pinnacle of his powers, taking on Senator Joseph McCarthy during the infamous anti-communist hearings of the '50s. When one sees the film in its glorious black and white there is less a nostalgic tone to the piece but a feeling that the days of genuinely impassioned TV newscasters such as Murrow, are a thing of the past. Clooney agrees, nodding his head and trying to ascertain whether that level of journalism can exist in today's fast and furious MTV world. ...I think there are a lot of great journalists out there and I don't find much fault in the journalist in general; I think everybody would like to break a good story but the problem is the same problem Murrow fought in 1954 that my father fought in 1974, which is a continuous diligent fight which is the idea, and it's not a simple answer. Les Moonves is a buddy of mine, I understand his problems of saying Listen, I got to back to shareholders and I got to deliver and the market is getting smaller, money is getting less. I understand all those problems but it has always been and it will always be the battle between corporate and information. It's a tricky one and it's complicated and I don't know if there are great answers to it."

While Good Night and Good Luck explores, with a dry objectivity, the events of a particular time in the fabric of American society, Clooney, who also co-authored the screenplay, says that the film is, in part, a tribute to his father. "It started, obviously, because I grew up on the newsroom floor watching my dad work with reporters like Deborah Dickson in Cincinnati, Ohio and Howard Aine and these really wonderful reporters, watching them piece a news show together. And Murrow was always the high water mark that everyone aimed for, so it was my love of that, certainly a tip of my hat to my dad and the sacrifices he'd made over the years." Clooney remains close to his father and recalls asking some advice when writing this, advice he accepted. "He just said the one thing to me constantly that was important, which is treat it like a journalist and double check, and double source every scene, so that when the people that want to marginalize it - and they are out there - not do so, I mean they can marginalize the film all they want but we wanted to say that each scene happened. It's important to say that because there's sort of a revisionist history going on that McCarthy was right and Murrow was a traitor. One of the papers actually wrote a nice story about that and Ann Coulter has a lovely book about Murrow getting the story wrong. It was important to recalibrate fact, purely fact, and that's all, so my dad said get the facts right and that was what was most important to us."

While Clooney has no qualms about either exploring his political liberalism on film or in the press, he laughs when asked about his own political ambitions. "That's a ridiculous idea though I've considered running on the 'yes I did it' ticket. It starts with 'And I drank the bong water.' "

Perhaps he could try his hand at journalism given his obvious passion for the subject. "I don't have the talent for it because I tried it when I was young. My dad's one of the best I've ever seen and there are people who do this really well, ask the right questions and are fearless."

As an actor, Clooney is prepared to take the kinds of risks that he perhaps he wouldn't have taken as he began his initially tentative crossover from TV to film. Audiences will soon see Clooney The Good German and Syriana but he denies he is putting more frothy things on the back burner. " I like frothy things since they are the things that bought me a nice house in Italy. If my sell-out is Ocean's Eleven then I'm doing okay, but if it's Batman and Robin I'm in a little trouble."