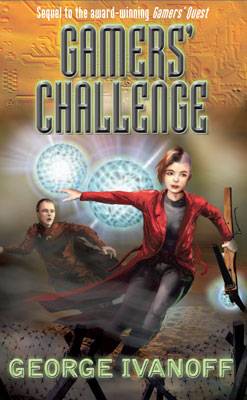 For Tark and Zyra, life was literally just a game, controlled by the all-powerful Designers. But then they broke the rules and life got a whole lot more complicated … and deadly.

Pursued by a powerful computer virus they must locate the Ultimate Gamer with the help of some unexpected allies, and face their greatest challenge - finding a way out of the game...

The action-packed sequel to Gamers' Quest.

More info about the Gamers books is available from the official website: www.gamersquestbook.com

George Ivanoff is an author and stay-at-home dad residing in Melbourne. He has written over 30 books for children and teenagers, two of which are on the Victorian Premier's Reading Challenge booklist. George has also written for numerous magazines and anthologies, including Trust Me! and Doctor Who, Short Trips: Defining Patterns.

Question: You write Science Fiction and Fantasy. What draws you to these topics?


Question: Do you base your characters around your children and some of the adventures they get up to?

George Ivanoff: Not specifically, no. I have been inspired by my kids in some ways but I don't specifically write about them. I write school readers and I wrote this one book called 'Mushy Mess' and that was inspired by my daughter who is eight now, but at the time was about one and she was such a neat eater and that highlighted how messy other kids were when they were eating. They would throw food and making a huge mess and Nikita would just sit there, never spilling a drop. So I suppose they inspire stories, but I don't just base my stories around them.


Question: If you could imagine the perfect "George Ivanoff reader", what characteristics would he/she have?

George Ivanoff: I don't think there is such a thing as a perfect reader. I really hope that my books have a really broad appeal, from children to adults. But I suppose people who are into computer games are more likely to relate and enjoy the 'Gamers' series because the books are structured as computer games.


Question: What is your number one tip to beat writers block?

George Ivanoff: Just to write. Sit down with some paper and a pen, set yourself a five minute time limit and just write. It doesn't have to be intelligent or make sense and you don't have to think about what your writing, but it will really help you get over our writer's block.