Inside Out Thought Bubbles 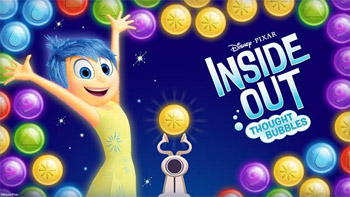 Inside Out Thought Bubbles

Disney Mobile Games launches Inside Out Thought Bubbles, a new bubble-shooter mobile game based on the latest Disney•Pixar film, 'Inside Out." Created by the team behind hit mobile games such as Disney Frozen Free Fall and Where's My Water?, Inside Out Thought Bubbles takes players on a journey with Joy, Fear, Anger, Disgust and Sadness to match and sort memory bubbles in Riley's head as they travel through unique locations inspired by the film.

In the game, players will shoot and match memory bubbles as they progress through 125 levels. Players will travel through Family Island, Dream Productions, Imagination Land and more as they complete each challenging puzzle and unlock new characters.

Each Emotion has its own unique power-up that can be unleashed to help gameplay. Players can create a sunburst with Joy, let the rain pour down with Sadness or launch a fireball with Anger. Throughout the game, players will face obstacles like Brain Freezes and can jump ahead using Brain Storm boosters.

Bringing fans exciting clips from the film, the app will feature an interactive retelling of the Inside Out film and activities where children can interact with Riley's five emotions - Joy, Fear, Anger, Disgust and Sadness.

Children can also create their own memory spheres with their own pictures, videos, voice, colours, effects, and sounds. Once created, they can save and share it with their friends and family!

Inside Out Storybook Deluxe is available now from the Apple App Store http://bit.ly/InsideOutStorybookApp