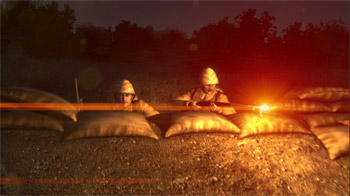 Leading up to the centenary of the landing at Gallipoli, the ABC and the Department of Veterans' Affairs have collaborated to develop Gallipoli the first day: Centenary Edition app.

Based on the AFI Award-winning documentary originally published online in 2009, this completely remastered edition tells the story of the first day of the Gallipoli Campaign in gripping detail.

The day is explored in fascinating detail, from the first sightings of British Naval ships by Ottoman shore platoons to the unfolding chaos of the pre-dawn landings; the Anzac struggle to gain purchase on the unforgiving terrain, and the dominance of the Ottoman Army through devastating artillery and fierce resistance to the Anzac advance.

Minister Assisting the Prime Minister for the Centenary of ANZAC Senator the Hon. Michael Ronaldson said: 'As we approach the 100th anniversary of the Gallipoli landings, the app complements a number of commemorative, educational and cultural initiatives developed to ensure all Australians can mark the Anzac Centenary 2014-2018, and to engage the next generation of Australians in our proud wartime history."

ABC Managing Director Mark Scott said: 'Gallipoli: the first day was a groundbreaking way for Australians to learn about the Gallipoli landings and it is gratifying to see it developed it into such an innovative app. This is a great use of not just the exceptional content but the medium as well."

Developed with education in mind, users can watch and explore events as and where they happened across the landscape of the Gallipoli Peninsula, recreated in a 3D map space of the accurate landscape of 1915.

To elaborate on the events of the day and the interactive elements of the map, the app also features:

War diaries read by Hugo Weaving and others, bringing poignant eyewitness testimonies of Anzac and Ottoman soldiers to life;

Moving video accounts of the landing by veterans;

Spectacular dramatic recreations of key moments of the day;

3D models of military hardware demonstrating the technology available to the opposing sides in battle;

Personnel records, archival photographs and military trees of some the thousands of soldiers who fought on the day;

Analysis of the broader Gallipoli Campaign, putting the first day in the context of this ill-fated front of the Great War;

Original maps used on the first day, that can be overlaid on the 3D landscape;

A reward system for users, offering an increase in rank and specialist medals as they progress through the app.

Creative Director/Executive Producer Sam Doust said: 'It's been a real privilege to return and remaster Gallipoli: the first day for tablet computers. The spatial nature of the storytelling is such a natural fit for a multitouch experience. The opportunity to rewrite and really increase the quality throughout has greatly improved the intimacy of the content and sense of immersion and detail one feels in the retelling of this extraordinary day in Australia's history."

For non-tablet users, the Gallipoli: the first day website has also been remastered, including captioned video and upgraded graphics – go to abc.net.au/gallipoli.

The app and website are classified -E' and teaching resources to accompany their use in classrooms are available at abc.net.au/gallipoli/teaching-resources.

The full ABC's full Australia Remembers coverage is available at: abc.net.au/anzac/programming. This site will be updated as projects and details are confirmed and announced.