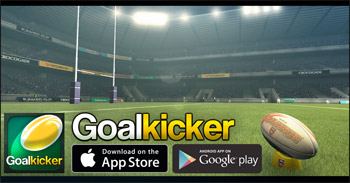 Aussie studio fUNKED OUT are pleased to announce the release of their new game. Just in time for State of Origin Goal Kicker Rugby League the follow up to Goal Kicker Aussie Rules Football which sold 78,000 units and reached the number one spot of paid Sports Game on iTunes app. store in 2012 and 2013.

The Goal Kicker Rugby League game puts you right in the action and lets you be the star. Hold your nerve and kick the ball between the posts, using an intuitive and in-depth flick system, only the best will rise to the top.

fUNKED OUT have raised the bar yet again with realistic ball physics, great graphics, real crowd sounds and online multiplayer to enable you to challenge your friends and others around the world. It's the closest thing to being on the field without having to move from the sofa.

Player Development
Play and improve your attributes. Do you focus on improving your accuracy, power or your ability to swing the ball?

Single Player Modes
Challenge Mode - can you work your way through all 100 scenarios? Our designers says no ○
Time Attack Mode - what can you score in this intense minute

Will you embrace the moment or crumble under the pressure?