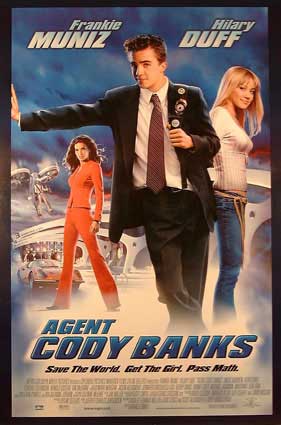 Golf fanatic, basketball player, car collector, TV star, teen heartthrob and he's just 17 years old. Frankie Muniz hit stardom with the successful Malcolm in the Middle and now he's heading to a big screen near you as a teen James Bond-type in the family adventure Agent Cody Banks. Frankie Muniz is the first to admit that he's no ordinary adolescent, as he explains to PAUL FISCHER.

Frankie Muniz is a young man on the move - literally. The 17-year old star of the hit TV sitcom Malcolm in the Middle had literally raced from the set of his series to do press for his latest big-screen outing, Agent Cody Banks "I wasn't even supposed to be working today so I can do this," he breathlessly explains. Casually dressed in light blue t-shirt and jeans, life for the 17-year old is far from conventional. One of the highest paid teenage actors in Hollywood, Muniz says that he wouldn't trade in his current life for anyone's. But then he adds, having acted professionally since age 12, he doesn't know any differently, "so I don't know how it would be if I didn't have it as this is normal to me, doing an interview like this going to the award shows, meeting all my favourite celebrities, filming, working and stuff." While most teenagers worry about girls and homework, Muniz has his own problems, What such as not "being able to sleep past 7 o'clock in the morning, because I'm just so used to always working that no matter what time I go to sleep, I get up. If I have nothing to do that day, I have to be doing something, like I have to go somewhere; I can't just sit at home and watch TV. That's one thing that my friends get so annoyed about, because they're like: Can't you sit down and relax? I feel like that the few hours that I have do to something, I have to take advantage of it and do it." Muniz is certainly a bundle of adolescent energy, as he talks with consistent speed. Home schooled, Muniz is trying to get through The Great Gatsby while enjoying a successful acting career, but is happy not to be educated in a conventional high school. "I have friends who go to 'normal' school and do the 'normal' teenage thing and I can't stand teenagers because they're just so normal," he says laughingly. "I'm just so annoyed by them, you know what I mean, in terms of the things that they do, the way they act, like they're just not themselves. The few friends I do have are completely like me, in that they don't dress a certain way, they don't act a certain way. It's just cool to have la group of kids that you don't have to worry about as to how you look or act."

But what sets Frankie apart from many of his peers and friends, of course, is a successful and highly lucrative Hollywood acting career. Fresh from the success of his TV series and last year's Big Fat Liar, Muniz returns to the big screen in Agent Cody Banks as a seemingly normal suburban teenager who secretly works for the CIA as an agent, gadgets and all. It was a project that appealed to him right from the get go he recalls. "I remember reading the script about years ago and thinking it would be so cool because the script was just so full of energy. Usually when you read a script, you can't really tell that, but it just seemed like it would be a lot of fun to do." One of the unique elements of the film is that Muniz' Cody may be suave and adventurous but not when it comes to talking to girls. The young actor admits that developing that part of his character wasn't that much of a stretch. "I can't really talk to girls, like going up to them and talking to them. I can have a conversation with them, but I can't hit on a girl at all if you know what I mean?" No wonder that Muniz is surprised that he is something of a sex symbol amongst teenage girls, who have a tendency to ooh and Ahhh when he turns up in Cody Banks minus his shirt. "What can I say? I think that's weird because I'm just normal and don't have girls chasing me. I'm not like, you know, get away, you can't come into my house tonight," he says with much laughter. "Wait a couple years", he adds.

He won't have any trouble driving prospective girlfriends out on a date, however. A huge car fanatic, Muniz bought some 9 cars in the last year alone some for show, others to proudly drive the streets of Los Angeles. He even bought one of the cars from The Fast and The Furious which he still owns, "and I'm sending it to more car shows. I haven't driven it in a while. I made all my money back, sending it to shows but I'm going to be selling it at the end of this year, so I can buy a couple more with the price that I get for it."

He is also looking for a house to call his own which he hopes to buy by the time he turns 18 "though I may not live in it on my own. That might be a bit weird." When he's not working, he says he's a huge basketball player. "Pretty much all I do is play basketball, drive and do the show, which is kind of odd, I guess, but I consider myself a decent basketball player."

In many ways, the 17-year old is a kid, a rich kid, but a kid just the same. He remains unconcerned at making the transition to adult actor. "People are always asking me: How are you going to make that transition to becoming an adult actor? Well, in eight months when I turn 18 I'm going to be a legal adult and if I'm acting then, doesn't that make me an adult actor? I think everything will work out and be all right," Muniz says with adolescent optimism, hoping, he adds, to continue "to do it for as long as I can. But that's one thing about acting and that's why I don't take any breaks, because you never know when it's not going to be there and you never know when you're not going to be wanted." No wonder young Frankie is trying to do as much as he can, while he can, but at the same time, the enthusiastic teenager has "got thousands of other things I'd like to do, too, such as racing cars, play basketball in the NBA and move to Sydney, Australia, which I fell in love with last year." The last part one could understand.