Australia's only locally designed and developed SUV; the Ford Territory is breaking new ground with a fresh look and feel.

Offering greater versatility and style for Australian drivers, the all-new Territory offers the strength and power of a traditional SUV, making it perfect for weekend getaways while having the prestige, agility and nimbleness to navigate through any urban outing.

Here's a look at the all-new Territory:

All Territory models will have up to seven airbags including an Australian-built vehicle and Territory first - a driver's knee airbag to minimise lower leg injuries in the event of a potential impact. The Territory has maintained its reputation as one of the safest vehicles on Australian roads with a five-star rating from the ANCAP (Australasian New Car Assessment Program) testing program.

Drivers can enjoy an all-new, six-speed automatic transmission across the whole Territory range which contributes to its impressive fuel economy.

Another fuel-efficient feature is Electronic Power-Assisted Steering, which helps to reduce fuel consumption by reducing the need to have the engine constantly running the power steering system. 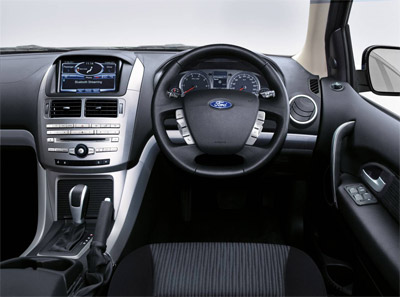 More power on the road

From impressive gains in power to exceptional towing capability, the next-generation Territory emerges as a clear segment leader in the power stakes. With a choice of a 2.7-litre V6 turbo-diesel engine or a 4.0-litre six-cylinder petrol engine, the Territory range offers exceptional torque* and power which is ideal for towing.

From trips to the supermarket to long drives up the coast, you can theme your travel with a tune through Territory's USB/iPod connectivity for all popular personal entertainment devices.

On closer look, you will also notice a number of design changes which embrace Territory's -Kinetic Design'*.

The all-new Territory is now available with a sales price from $39,990* drive away. For more information on Territory visit: www.ford.com.au/territory