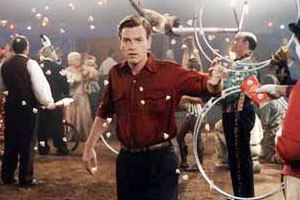 Humility doesn't come easy to Scottish actor Ewan McGregor. Clearly one who despises the whole press junket process, McGregor was not in the mood forjocularity when promoting his latest film, Big Fish, a comic fantasy about a unique father-son relationship. Known these days to millions of moviegoersas the younger Obi Wan in the latest Star Wars trilogy, McGregor reacts almost defensively when asked if he is surprised how successful he hasbecome, given his more self-effacing origins on the silver screen in the likes of Shallow Grave, Blue Juice and even the raw Trainspotting. "Yesbecause I am a terrible actor," he says with a certain bitter tone in his Scottish voice. "Every day I am amazed and I thank my lucky stars that Ifooled you all this time," spitting out the words with a half laugh.

Big Fish is a far cry from the actor's low-budget Young Adam, in which the 32-year old bears body and soul, but loves the challenge, he says, ofslipping from one cinematic extreme to the other. "The idea is to pretend to be someone else and do it from stories so they would all be different. Idon't see them as big or small pictures, but are all just films. I think it would be limiting otherwise. Do you have a budget cut-off? Is it 40 million?I don't know how to draw the line." Big Fish, from idiosyncratic director Tim Burton, revolves around a dying father, the larger-than-life EdwardBloom [Albert Finney] and his son William [Billy Crudup], the latter of whom is trying to learn more about his dad by piecing together the stories he hasgathered over the years. The son winds up re-creating his father's elusive life in a series of legends and myths inspired by the few facts he knows.Through these tales, the son begins to understand his father's great feats and his great failings. McGregor plays the younger Edward in this mythicalfantasy adventure. Despite this very American Big Fish being set in the south, ironically, a Scot and a Londoner were cast as both versions of Edward Bloom, a fact that is of no concern to McGregor, who revelled in the idea of playing a younger version of the legendary Albert Finney. "I think we're all players and that we should get to play whatever. I didn't question that it was two British people playing an American guy. To be in a film with Albert Finney at all would be a huge honour, but to get to play him was insane in my thinking. Although we didn't get to act together it was such a beautiful experience getting to know him because he is a diamond and such a lovely man," says McGregor.

The actor says that in some strange way, he could relate to the adventurous young Mr Bloom, "in the sense that we both come from small towns and he goesto seek his fortune in the big city, which I suppose I did," he says, chuckling.

McGregor particularly was able to relate to the parenting themes of Big Fish which dominate the movie, insisting "I responded more as a son as opposedto as a father. I think it's about a father and son relationship and so therefore I thought a lot about my dad while we were doing it," McGregor says in a rare moment of introspective tranquillity. "My father isn't dissimilar to Edward Bloom in that he's very gregarious and he loves telling stories. He doesn't tell huge stories about his life like Albert's Edward Bloom does, but he loves telling stories. If you were to go back to my hometown with him he wouldn't be able to walk down the street without telling old stories. He used to frustrate us in our childhood because it would take us so long to get anywhere, because he'd always be stopping to speak to someone," McGregor recalls, smilingly. McGregor refers to his father, a dormer school teacher, as "a great, lovely man who was a teacher at the school I went to. A lot of people think that is a problem but he was liked so that was never a dilemma." With both parents working as teachers, McGregor recalls neither parent having much of a reaction to his fame, but as an actor, he says his dad was pleased when he just started working. "I don't know how I would have handled it because there is no guarantee. In other jobs you can land something and go into business but there are very few actors who work a lot so it must be daunting to parents."

McGregor, who has appeared in close to 30 films, has found time to marry, raise two daughters, and spend time in Australia working on the final chapter of the laborious Star Wars trilogy. In the past, McGregor has made a point of emphasising the difficulties of making those films, as to working on more non-special effects films, such as Big Fish or Young Adam. "Blue screen work is very, very difficult. What was fun about Big Fish was, that we did all these tricks, but did them there on the day, rather than rely on green screen. You can't do that with a Star Wars because you're in outer space and you can't shoot that without using computers," he says laughingly. Yet as hard as it might be shooting a Star Wars, McGregor says there is still much he has taken from that experience. "It is the wonder in the children's eyes that I felt when I felt as a kid watching the original films when they come up to you ask you what it was like to cut Darth Maul in half or turning your light sabre on. It reminds me of how I felt when I was six years old so to be a part of that is a real treat." And McGregor has no regrets. "None at all. I have been vocal about how difficult they are to make but I have been very happy to be in them. Yet there is a sense of closure to them and it is satisfying to complete something, especially something that has taken up about eight years of my life or however long it's been. I think there's a little bit more to come. There usually is a re-shoot, which I think will be in March."

As Big Fish is a film about telling stories, McGregor, who loves to travel, recalls that his impressions of America match up to the images he might have had from television and the movies. "I now can separate the two." There is an enormous amount of it on TV and cinema so I had the look and feel of it. But I suppose by having worked here I have a much more realistic understanding of it in that I have been lucky enough to have worked in Utah, Alabama and I worked in Chicago." McGregor also "crossed the country on a motorcycle trip after this film so I have more of a sense of the real America now." And the actor's passion for motorcycles and travel will continue next year in the form of a documentary. "We take off in April. It is a trip we wanted to do for many years, so it seemed like if we don't do it now we will never do it. We are crossing Europe, Kazakhstan, Russia, Mongolia and China and then around to Alaska. There is just me and Charlie [Boorman] and we will meet a camera crew every couple of weeks." The actor, who rarely leaves his family for extended periods of time, is undaunted by the overabundance of problems he might encounter on the road. "There are a lot of what ifs in life which stops you doing stuff. I am excited about driving across Mongolia, setting up a tent somewhere and finding people who live a different life than we do and I am fascinated about finding out about their lives. I am more fascinated about that than I am worried about any threats to me. I rode across America after finishing this film and you wouldn't believe how negative people were about that. What if this and what if that? What if you run out of petrol? Well, it's fucking America. There is a petrol station every five minutes."