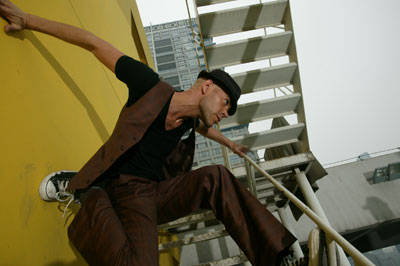 Eric Kupper has been involved with house music for over twenty years; he is a double Grammy Award winner, winning the Dance Record of the Year for two records that he mixed. Eric's career began whilst working as a keyboardist, guitarist and songwriter for producers such as David Morales, Frankie Knuckles, Arthur Baker, Mark Kamins, Justin Strauss, Peter Rauhofer and Richie Jones.

Eric has 1,700 records under his belt that he has remixed or produced for the contemporary music genre. He is a true- musician, being one of the few artists in dance music today that is a master multi-instrumentalist.

Over the years, thousands and thousands of hours in the studio has polished Eric Kupper into one of the most sought after producers/remixers/musicians in the world.

Kupper has helped sell over 50 million records for many international artists with his remixing and multi-instrumental talent.

Eric was a resident DJ at London's Pacha with Hed Kandi whilst he also DJed all over the world adding his keyboards for extra flavour to his beats.

The album is nothing short of legendary; a sexy mixture of cutting edge electronics infused with undeniable soul, the K-Scope album, as well as two new EP's on vinyl.

Eric is also a resident DJ with Fierce Angels, the recent venture created by Mark Doyle, the former creator of Hed Kandi. He is currently traveling all around the world rocking crowds from New York to Moscow to Manila...

Fierce Angel is a massive unforgettable event of decadence and dance. On Valentine's Day 2010 Fierce Angel Loved Up took guests on a boat cruise around Sydney Harbour Bridge. Since Fierce Angel was introduced to Sydney in 2009 it has become on of the hottest events.

What do you like most about Fierce Angel events?

Eric Kupper: First of all I am looking forward to playing in Australia, it will be my first time. I've been to Sydney once but never played. I am love Fierce Angel parties because they are a big load of fun and just doing it with Peyton will mean we will have a blast. I am just going to try to have everybody including myself have a great time.


How did it feel to hear your song played throughout an event?

Eric Kupper: It is always a good feeling to hear what you have done kind of being appreciated by as many people as humanly possible. So yeah, it is always a good thing and it is even better when one person walks up to you and says how a certain song made them feel when they were listening to it or that a certain song brings back memories. That is the greatest.

Eric Kupper: No, I was always a musician so I kind of just fell right in. I absolutely had no pre-conceived ideas. I didn't really know the craziness that goes on in the business that I do now and I'm glad I didn't (laughs).


Where do you get the inspiration for your songs?

Eric Kupper: From various sources, it can be from people I meet, from places I go, from my family; lots of places!

Eric Kupper: Oh Gosh! I all over the shop in regards to what I listen too. I listen to rock, jazz, pop and classical; I am a huge Beatles fan. Right now I am called The Real Tuesday Weld, which is some bizarre electronic band from the UK.

Eric Kupper: It is funny, to get a good tour arranged, I sort of just pop out for a weekend, where I should probably just go out for a month, then chill for a month. It seems like I am always popping here, there and all over the place. I am going to Portugal, Brazil, England, Italy and obviously Australia, it will be pretty full on.

Eric Kupper: A lot of people, kind of. Growing up I was very into music. I was very into Quincy Jones, he is a great producer who produced Michael Jackson and countless other things. I was also into guys like Todd Rundgren they were do-it-yourself kind of guys. I liked The Beatles and Stevie Wonder as well as Miles Davis- all of these guys were big influences on me. When I hit the dance music scene all the guys taught me nearly everything I know about dance music.

Eric Kupper: It can be a bit mad, because I am a father and I have a lot of things going on. I am basically my own manager so a day in the life of me is usually getting to sleep at like 2-4 in the morning and then waking up three hours later and checking my emails and getting a few international things done that have to be done then, then maybe going back to sleep for a couple of hours. Then, waking up and facing my regular day which means everything from getting into the studio, running basic errands - to the bank and nonsense like that. Then I pick my kids up from school and make dinner for them. Then often it's back into the studio and down the pub!

Eric Kupper: I guess I am just very, very fortunate to be paid to do what I'm kinda put on this earth to do. I just never forget that.

Eric Kupper: I would love, I have remixed a track of hers many many years ago, but I would like to work on original material with Björk; it would probably be the funniest thing in the world, she is the first artist that springs to mind.

Eric Kupper: Number One would be not being too hard on yourself and kind of accepting yourself for who you are.
Number Two would be making sure your health doesn't slip too much; in this business it will slip a little bit but you have to keep things in check.
Number Three would be make sure whatever you do, for your employment, that you are not miserable at it. There are different levels, not everyone enjoys what they do everyday but make sure you are not just dreading going into your job everyday, if you do then there is something wrong.
Number Four, make time for yourself to stop and smell the roses, enjoy your life.
Number Five is listen to plenty of music.