Dumped at the Altar! 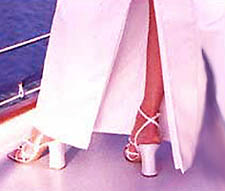 "He left me at the altar for another man!"

It is the night before my wedding and I am feeling incredibly nervous and excited all at once. I can't believe this time tomorrow I will be married; somebody's wife, Mrs *Andrew James...wow now that sounds scary. Who would have thought that me, Miss "I will never get married" *Lucinda would be writing this on the eve of my wedding! I am so happy and love Andrew with all my heart. I have been planning this occasion for the last three years of my life. I am really looking forward to tomorrow and our future together. Must go to sleep now, I need to be refreshed and vibrant for my big day!

On the morning of February 14th, 1995, I woke up with uncontrollable butterflies in my stomach. This was the day Andrew and I would be married. The man I had loved and shared my life with for the past three years. Although our wedding was still several hours away, there was still so much to do. I had to organise my bridesmaids *Belinda and *Vicky, as well as myself. First we were off to the hair salon and beautician and then a final check that the floral arrangements had in fact arrived for the bridal party. Not to mention the photographer was still to arrive, relatives would be on my doorstep, and I still had to pack for my honeymoon - Paris (I could hardly wait). So many things to take care of, so little time.

Lucky for Andrew, he had escaped all this mayhem the night before, by deciding to stay the night at *Jason's place (his best man). Andrew was both a superstitious and old-fashioned person who believed that it was bad luck for the bride and groom to see each other on their wedding eve. Personally I didn't care too much for superstition but Andrew had insisted on it.

In the morning, I couldn't resist calling him as I had missed him the night before - it was our first night apart in nearly two and a half years. I wanted to hear that familiar deep, sexy voice and wanted Andrew to reassure me that everything would go according to plan for the most important day of our lives. As usual, Andrew was his calm, relaxed self, however a bit standoffish I thought, but I just put it down to nerves. I recall Andrew's parting words to me were "See you at the Church". There was no "I love you" or "I can't wait to be with you", just a casual "See you at the Church". I remember at the time feeling a sickening sensation creep into my stomach, what was it about these words that made me feel anxious?

Belinda and Vicky just put my reaction down to nerves too, while my parents who had now arrived, assured me that everything would be perfect. But some tiny alarm bell kept ringing inside my head as I mentally prepared for my wedding day. As hard as I tried to push my doubts out of my mind, they remained there in the background. My gut instincts unfortunately proved to be correct.

When I arrived at the Church, I just knew that Andrew wouldn't be there and my suspicions were confirmed. Standing outside the tiny Church was the best man Jason but Andrew was nowhere to be seen. "See you at the Church" he had said. At first my hopes rose as I thought that Andrew might have gone for a walk to shake off possible pre-wedding nerves but then the awkward look on Jason's face gave it all away.

"Where is Andrew?" I demanded. "You were supposed to be looking after him. Where is he?" As Jason pathetically tried to offer an excuse I collapsed and burst into tears as my heart completely broke. What was supposed to be the happiest day of my life was turning into a complete nightmare, which I thought I would never wake up from. The walls came crashing down, as I struggled to comprehend what was happening. "Luci, Andrew said to meet him here over an hour ago, but somehow I don't think he is coming today," Jason said to me. Was that supposed to comfort me?

In the heat of the moment I lunged at Jason and slapped him in the face. I don't know who was more stunned, Jason, my parents or myself? My father took me aside and tried to calm me down while Belinda and Vicky tried to control my now hysterical mother. What a mess everything was turning out to be. It was supposed to be perfect, absolutely perfect...why me, I thought. I couldn't believe that Andrew would be so insensitive as to leave me at the altar in front of all our family and friends. Not only did I have the hard task of cancelling the wedding, I was at a loss to explain why, which only added to the total humiliation I was experiencing. Seeing my family and friends gathered together in the Church only added to my pain.

The events that followed are a blur. I remember waking up the next morning in the house that Andrew and I had shared for the past few years, to find that all of Andrew's belongings had been cleared out of the house. My first reaction was one of disbelief and then the emptiness.... Andrew had really left me and with no explanation. My next thought was to murder him.

"You spineless, gutless, weak excuse for a human being" I thought to myself. While I was attending what was supposed to be our wedding, Andrew was busily clearing out his things. In fact, I get the distinct feeling that Andrew had no intention of marrying me at all, as his disappearance seemed to be very well planned in the first place.

For the remainder of the day and the several weeks that followed, I was only present in body, certainly not in spirit. I couldn't watch a romantic film without balling, literally. Hearing love ballads playing brought back painful memories that ripped at my heart. When the phone rang I would race to it, hoping it would be Andrew. But it never was.

I guess one of the most painful aspects of this whole heartbreaking experience is that I truly believed that Andrew and I would grow old together. While I have always believed in the constitution of marriage, I often had doubts that marriage was right for me - until, I met Andrew. Andrew literally swept me off my feet and we connected instantly. I was under the impression it was what we both wanted - was I such a poor judge of character?

When the whole truth eventually surfaced, only more pain followed. I gradually pieced the puzzle together and discovered that Andrew had been having an affair while we were engaged, just as I had suspected. It wasn't easy to trace Andrew's steps over the last year or so but it was achieved through the help of my friends and some of his.

What I discovered was too unbelievable to comprehend. Andrew had in fact been having an affair with Jason, the best man! The attraction between them first started when they were both in high school. On a chance encounter with one of Andrew's former high school friends, I discovered that Andrew had in fact had a homosexual experience with Jason, when they were both in Year 9. The boys were drinking alcohol one night when they decided to fool around and experiment. It was a one-off experience and nothing was ever said of it. Obviously Andrew's curiosity and attraction for Jason was never cured as they continued to have an intimate relationship with each other that extended way beyond the duty of friendship.

While it is always in the back of your mind that your partner may in fact cheat on you one day, you never really suspect that it will be with another man! Nothing could have prepared me for the news about Andrew's affair and still to this day, it makes me sick in the stomach thinking about it. I was quite stunned and speechless when first told the news. Not only had Andrew dumped me at the altar, he had left me for another man! To think that I was oblivious to Andrew's activities for three years makes me angry. Not only was he dishonest but he also placed both my life and his in danger by engaging in this deceitful behaviour. He betrayed both my love and trust for him.

Seven years on, and I am still taking one day at a time. Just when I start feeling stable, I have vivid flashbacks of the tragic events that almost destroyed me. Discovering your partner has 'gay' tendencies can really affect a woman's self-esteem. As a consequence I have a deep distrust in men, which I am currently working through. I kept blaming myself for Andrew leaving but through the course of counselling I have since accepted the fact that Andrew was the problem in this equation and not myself. Had there been any warning signs, maybe I could have prepared for what I was to endure. Or were there warning signs? Maybe I was too involved in the relationship to notice. All these unanswered questions still re-run in my head from time to time, how can they not? It is not everyday that your partner runs off into the sunset with another man!

* Names have been changed