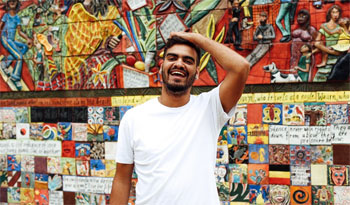 Due West: an immersive experience in Melbourne's West

City of Maribyrnong is pleased to announce the final program for Melbourne's Due West: Immersive Arts Festival showcasing local creatives, organisations and venues from 10 – 27 August.

An immersive experience, in Melbourne's inner west, the new Festival is a partnership between the City of Maribyrnong and the Victorian Government through Creative Victoria, inviting art-lovers and culture-vultures of all ages to participate, engage and interact with art across multi art-forms; often in unexpected locations.

'We've worked closely with the local arts community to develop a program which is indicative of the vast talent in west said Festival Creative Director, Zoe Beyer."

The previously announced program includes -A Scandal in the Weimar', intimate guerrilla opera cruises by BK Opera will float along the Maribyrnong River with a series of live music events, The Right Side of the Tracks', projections and street talks in a Footscray-based residential street, and a much-anticipated performance at the iconic Franco Cozzo furniture store, the festival offers free and ticketed experiences for everyone.

With the first Due West: Immersive Arts Festival commencing in less than two weeks, the final announcements of diverse local community collaborations have now been revealed rounding out the final program, for what promises to be a truly inspiring experience through the ever-changing inner west.

Fridays are Better than Mondays – FCAC (Footscray Community Arts Centre)
Friday 11 August
Fridays are always better than Mondays. Footscray Community Art Centre and Due West Festival have come together to bring you an immersive Friday night of art, music, and poetry. Enjoy an artist talk and exhibition with Arika Waulu, member of the Warriors of Aboriginal Resistance (W.A.R) - a collective of young Aboriginal people committed to decolonisation, resistance and revival; sets by T.A.Z (Temporary Autonomous Zone), The CoreTet, and The Hacketts as well as a spoken word showcase including Soreti Kadir, Aisha Trambas, and Piriye Altraide.

Fire on Earth by Waterside Blacksmithing – Waterside Metal Art Studio
Saturday 12 August
The fire burns! Following the highly successful 2017 Blacksmiths Festival's spectacular -Fire on Water', the Waterside Blacksmithing & Metal Art Association has forged an alliance with the BiGfiSh Workshop to present its sister act, -Fire on Earth' which will see the construction of a -fire tornado', a huge twisting column of roaring flame that will dance in the air reaching for the night sky. Don't miss this hypnotic and alluring spectacle, presented in conjunction with public forging demonstrations, live music, and family friendly fun.


West Projections Opening Party - The Line
Saturday 12 August
Celebrating the launch of West Projections Festival at The Line.  This is piece is an exciting line up of artists, performances, and projections all exploring the 2017 theme of Synthesis. Soreti Kadir gives us spoken word, IICX Art Collective perform, VJ CarlaZimblar illuminates the walls and with music by Dj's.

The Art of Fighting by Mischa Merz + 10 Minute Dance Parties – Madden Square
Friday 18 & Saturday 19 August
Get into the swing of it with The Art of Fighting a community art project involving dipping boxing gloves in paint and punching onto a vertical stretched canvas. Get together with local boxing identities and champions from the western region, connecting the event to the local area and the long tradition of boxing being a working class sport.  The event will coincide with 10 Minute Dance Parties, offering live music, food, and beverage.

Philly and Culture Evolves by Bad Apples Music – Kindred Studios
Friday 18 August
Culture Evolves is the collaboration between local artists Phillip Murray (Wamba Wamba), Neil Davis (Yorta Yorta) and Brent Wakins (Gunai/ Kurnai and Yamaji), alongside friends Adrian Eagle and DJ Marze, each coming together to celebrate the evolution of culture, expression and sharing first hand challenges and successes through music and dance. The evening will include inter­active songwriting and dance work­shops, as well as performances from Bad Apples Music artist Phillyandlive band.

The Night Circus by Women's Circus – Dream Factory
Saturday 26 August
Delve into the deliciously fluid world of circus. The Night Circus is a moving performance across three iconic Footscray sites. Watch aerial performers, encounter a power house troupe of aged, idiosyncratic circus women and watch a factory site come life with a choir evoking ghosts of the past.
This special performance includes an adult's pop-up circus workshop, so once you've watched the show, you can try it for yourself.

Rhythm Works by Dance Habbit – Dance Habbit
Sunday 27 August
Rhythm Works is a specialised, but inclusive, Rhythm and Dance program designed for those with individual learning differences and other special needs. Dance Habit is excited to be included in the upcoming Due West Festival running taster Rhythm Works classes for preschool and primary aged students. Booking essential!

Uncover art in the west through performances, workshops, exhibitions and installations from 10 – 27 August at Due West: Immersive Arts Festival