A Day On The Green: Stevie Nicks 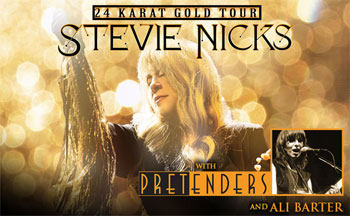 A Day On The Green: Stevie Nicks

Roundhouse Entertainment, in conjunction with Live Nation, is thrilled to announce that superstar singer-songwriter Stevie Nicks will return to Australia for an exclusive run of her 24 Karat Gold shows this November, including three shows for a day on the green.

Joining Stevie for these special concerts are the legendary Pretenders, fronted by Chrissie Hynde.

Fans will be treated to full, individual sets by Stevie Nicks and Pretenders, who will both be performing their classic hits and much much more.

The 24 Karat Gold Tour will include three a day on the green winery shows at Bimbadgen in the Hunter Valley, Sirromet Wines at Queensland's Mt Cotton and Rochford Wines in Victoria's Yarra Valley.

Stevie Nicks, a multi-platinum selling artist – dubbed 'the reigning queen of rock and roll" by Rolling Stone magazine – has had six Top 10 albums and eight Grammy nominations. Her timeless classics include the iconic Nicks-penned Landslide, Gold Dust Woman, Rhiannon, Edge Of 17, Gypsy and scores of others.

Stevie's 2014 album, 24 Karat Gold – Songs From The Vault, debuted at number 7 on Billboard's Top 200. As a member of Fleetwood Mac, Stevie performed 122 sold-out shows around the world during 2014-2015. Most recently, Stevie completed a sold-out solo tour of the US with Pretenders, which received rave reviews.

As a solo artist and a Fleetwood Mac member, Stevie Nicks has sold more than 140 million albums and won several Grammys.

'It's been thrilling to get on stage each night and sing some of my gems from early in my career, along with getting the chance to sing the material from my last two albums, In Your Dreams and 24 Karat Gold – Songs From The Vault," Stevie says.

Pretenders cross the bridge between punk, new wave and Top 40 pop music with unparalleled style and with hit songs like Brass In Pocket, I'll Stand By You, Back On The Chain Gang and Don't Get Me Wrong.

The band has sold in excess of 25 million albums and founder and leader Chrissie Hynde is one of contemporary music's greatest songwriters. Chrissie most recently released the album Stockholm and a 2015 memoir, Reckless: My Life As A Pretender, hailed by The New York Times as 'honest and distinctive … first and foremost, a love letter to rock and roll".

Suitably for an event celebrating two iconic female trailblazers, the bill will also feature an artist The Huffington Post called 'a bold, brash, ball-tearing feminist rocket". Melbourne-based Ali Barter's first album, A Suitable Girl, debuted at number 17 on the ARIA charts, and featured Ali's breakout single, Girlie Bits, 'a riot grrrl rallying cry" about how women are treated in the music business. The Music called the album, 'dynamic, fun and edgy, equal parts catchy and cool", while The Weekend Australian's four-star review described it as a 'superb debut … wrapped in a whirring grunge/pop soundscape". Ali was nominated for Best Independent Artist at the 2017 AIR Awards.

The 24 Karat Gold Tour brings together some of music's most compelling women – a unique lineup that is not to be missed!

This summer season marks the 17th year of a day on the green, which started in January 2001. After more than 425 shows and three million happy patrons, the a day on the green experience of good food, good wine and great music is firmly established as one of Australia's most popular concert events.