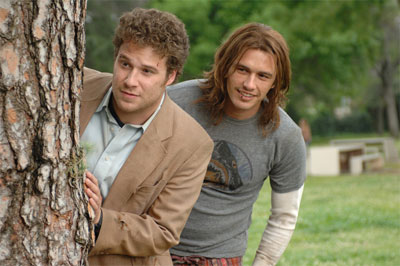 DAVID GORDON GREEN: FROM INDIE TO THE MAINSTREAM

David Gordon Green has emerged as a director who takes risks, from Undertow to his latest film, Snow Angels. Based on the acclaimed novel, Snow Angela deals with a myriad of characters dealing with emotional fragility and tragedy. Kate Beckinsale stars as a single mother dealing with the emotional problems of her ex-husbande, played by Sam Rockwell. Gordon is currently wrapping Universal's latest Judd Apatow comedy, Pineapple Express, which represents a very different side to this diverse director, who discussed both films with Paul Fischer.

QUESTION: Now, you beganSnow Angels purely as a screenwriter. Which is my understanding.

DAVID GORDON GREEN: Yes. It's actually the first time anybody ever wanted me to do a job.


QUESTION: Why did it take them so long to recognize your talent as a writer?

DAVID GORDON GREEN: [LAUGHTER] I don't know. It was kind of one of the things where the director that was developing the project sent me a book and asked, "Are you interested?" I guess - you know, a lot of people don't assume - or, just assume that writer-directors don't want to write stuff. I don't know. But I just look at it as a way to explore a lot of different content, keep your fingerprints on a lot of different projects, and dabble in different genres. And for this to be an adaptation, something I hadn't done, seemed a really attractive exercise.


QUESTION: What were the challenges in adapting the book, purely as a screenwriter?

DAVID GORDON GREEN: No real challenges, other than the emotional challenges. Making sure that I identified with all the characters. So it was kind of exhausting, personalizing a lot of things, just because it took your association with a lot of these characters to some pretty tough places. But literally, the book was just a valuable resource in finding the characters and atmospheres. And - you know, there's a lot of the kind of conventional devices of character elimination, and simplifying. And I made it contemporary, where it was written as a period piece. So, some broad stroke changes. But it was all very cinematic from the start, and certainly very thorough emotionally.


QUESTION: What was the original period?

DAVID GORDON GREEN: It took place in the '70s, with, like, Vietnam in the background.


QUESTION: Oh, I see. And how - by making it contemporary, what other changes did you have to make in order to maybe alter the tone in any way? Obviously the politics have an effect in the book. So what replaces that, if you will?

DAVID GORDON GREEN: Well, you know, the effort was to make it timeless, so that it could appeal universally. So just as much as there's a cell phone in one scene, there's someone who listens to a record player in the next. So it really wasn't much of a challenge, other than to the stylistic kind of mannerism of avoiding - when you're shooting down the street, avoiding McDonald's.


QUESTION: Now, where you segue to directing this, what drew you to this as a filmmaker?


QUESTION: It's not a cheerful, optimistic piece. Was that a concern to you at all?

DAVID GORDON GREEN: Well, I don't know, I disagree. I mean, it's certainly not cheerful. Most of it. But we did want to thread in a lot of humor. And it is - you know, in my opinion, it's through the eyes of an optimistic character, which is Arthur, and the love story that kind of keeps everybody in balance is - those first flirtations and anxiety. And ultimately, hopefully, the eyes and the lessons learned from the cautionary tales that he is witness to.


QUESTION: Was the casting challenging?

DAVID GORDON GREEN: No, not really. You know, Sam was in place before I got involved. Which - you know, I was over the moon about, because I'm a huge fan of Sam Rockwell. I met Michael Angarano a year before in an elevator in New York City and talked to him, so it seemed like he was the first guy I talked to, so I cast him. Olivia Thirlby came in and we had a tuna fish sandwich over lunch one day. And she hadn't been in a movie before at that point. And so - but she seemed interesting, so I told all the other auditions to go home. Amy Sedaris seemed like a perfect element.


QUESTION: What about Kate? I mean, being English, was that a help in conveying the emotional fragility of this woman?

DAVID GORDON GREEN: I think when I got in a room with her, A, I was struck by her sense of humor, which, again, was gonna bring an understanding of an audience to a character doing some challenging things. But her experience as a mother and her relationship with her ex-husband and her current husband was just a really wonderful resource to bring an authenticity to something that otherwise I'm sitting there, some - you know, writer in his 20s, male, sitting at a keyboard imagining what it must be like. She's there to confirm and take beyond the page.


QUESTION: What do you hope audiences will get out of Snow Angels?

DAVID GORDON GREEN: I think they'll identify with elements of these three kind of intertwining love stories, and identify with those anxieties, and slivers of smiles, and charming flirtations, and heart-beating moments before the first kiss, enough so that they can look at the frustrations of their lives and see the innocence where it all began. And they can look at the older - the Griffin Dunne-Jeanetta Arnette love story and think about those moments when you're willing to walk away, and maybe you do step away, but you realize the void that the lack of these people in your lives create, that you realize that you're happy, you're with them flaws and all, ride it out.


QUESTION: I can obviously understand why somebody watching Snow Angels would say to themselves, "You know, this is a guy who should be directing an action comedy." [LAUGHTER] "This is the guy we need for Pineapple Express, because he is going to make - turn this action comedy into a nihilistic, maudlin indie film."


QUESTION: And I've seen all of your work, and I love all your work. And I'd like to know what it was that the studio and Judd and everybody thought of you for that film.

DAVID GORDON GREEN: You know, I'd say - I'd have to credit Judd and the studio for thinking outside the box. And they certainly got - I mean, we've got plenty of the cookie-cutter comedies that come out, and they have a good opening window and they live forever on cable. But what they - really, their agenda was to make distinctive movies that had a real flavor, and something that - each of them had their own character. So they're looking outside the box for directors that can bring something to it, to do something interesting and nonconventional, and push the envelope, and really make - I mean, it's like, they were doing in the early '80s that they talked about as classics 20 years from now. So they really have a lot of ambition within the formula. And when I - you know, I visited the set of Knocked Up and met everybody, and realized real quickly that they're making very commercial comedies in the same manner of loyalty and friendships and improvisation of actors that me and my gang were making small dramas. So we decided to kind of blend both teams, and see what - you know, as an experiment, and see what would come out. And so far, everybody seems pretty thrilled with what we've come up with.


QUESTION: There's a pretty high buzz on that movie.

DAVID GORDON GREEN: Yeah. And it'll hopefully translate to some commercial potential here come August. But for right now, I see it as, it's great - it's a great confidence-builder, having two movies with such extreme, different - in these different genres, and exercising different aspects of my own interests as a filmmaker, to hopefully open up some opportunities for the future.

QUESTION: Did you learn anything at all about the politics of Hollywood, working on a big movie like Pineapple Express? Or was it pretty much the same experience as doing your own little movies?

DAVID GORDON GREEN: It was a different experience, but it wasn't really - I mean, there are different things - there are different challenges. It wasn't so much budgetary challenges, in terms of, like, we're not running out of film stock on a movie like Pineapple. But at the same time, we're trying to maximize, and we're trying to do bigger explosions and more exciting car chases. And we're working on a comedy budget. So - you never have enough time, you never have enough money. But there wasn't any real - I mean, everybody's on the same page with the movie we were making, from the producers to the studios to the actors. And everybody just really got in there and pushed. You know, we did some test screening ahead of time, realized that the audience was hungry for us to put it all in there, get a little weirder, and really show them something that they haven't seen before.


QUESTION: Was it fun being an action director for the first time?

DAVID GORDON GREEN: Oh, absolutely. Man, I had my hands on toys that I was - you know, I've been a huge fan of - particularly, '70s and '80s action films. So to be able to - you know, bring some of those toys out of the closet and play for real, and exercise those interests, I think was really valuable. And certainly inspired me to want to make - I don't know that I'd be the next Michael Bey. But I'd like to bring more - [LAUGHTER] more interesting ideas on an even greater scale together.


QUESTION: Did this give you a taste for playing more with the big boys, after Pineapple?

DAVID GORDON GREEN: Absolutely. You know, I had a wonderful experience on it, and certainly have enormous ambitions, from epic Westerns to shooting on the moon, to - you know, to some of the small, more intimate experimental movies that I have that are challenging to finance, and difficult to get out there. But everything I look to with a certain appetite. And if I didn't, I'd probably go do something else. [LAUGHTER] 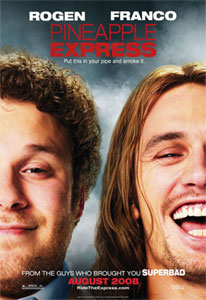 Director David Gordon Green (GEORGE WASHINGTON) adds another carefully sculpted drama to his resume with SNOW ANGELS. Green deposits a strong cast in a snowbound Pennsylvania town for his fourth full-length feature, which revolves around the troubled teenage life of young Arthur (Michael Angarano). Arthur divides his time between working at a Chinese restaurant and dealing with the break up of his parents. His endearing lack of self-confidence is tempered when new-girl-in-town Lila (Olivia Thirlby) shows a romantic interest in him. Meanwhile, Arthur's co-worker and former babysitter, Annie (Kate Beckinsale), is trying to raise her child alone after the failure of her marriage to the unhinged Glenn (Sam Rockwell). Annie also embarks on an unwise affair with Nate (Nicky Katt), who happens to be married to her best friend. Green's central characters try to make the best of their modest lives until a major incident, dropped halfway through the movie, raises the tension between Annie and Glenn to breaking point. Beckinsale, Rockwell, and Angarano all deliver consummate performances, and they are joined by a strong supporting cast that includes Griffin Dunne and a rare straight role for comedian Amy Sedaris. Green's style, so often compared to that of Terrence Malick, takes a slightly different turn here as the director delivers a relatively straightforward thriller. But the change suits him, and SNOW ANGELS contains enough edge-of-your-seat tension to keep audiences curious as to where the director is going to take them.