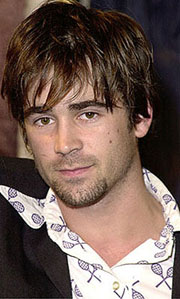 Irish actor Colin Farrell is one of the fastest-emerging stars in Hollywood. In the months ahead, we'll see him in the Western "American Outlaws", Joel Schumacher's "Phone Booth" and Spielberg's "Minority Report". But first up, he handles the reigns in the critically acclaimed "Tigerland". Farrell recently talked to Paul Fischer in Los Angeles, about his attitudes towards fame and Hollywood.

Colin Farrell may be the hottest young thing to come out of Ireland in years, but the 25-year old Dublin-born actor admits to getting tired of the media labelling him as such. "Fortunately I don't have to live in it all the time", Farrell responds with thick Irish brogue in toe. "But it also gets a bit borin' talking about yourself really; it must be easier to find people who are much more interesting." As for the pressure he might feel being in this position, Farrell is further dismissive, "because a producer in this town would feel a lot of pressure every day and I was like that, I'd be a lot greyer than I am now. The only pressure I feel is to be as good as I can be in anything I do. "

Farrell was "born and bred" in Castleknock in Dublin and continues to live in the city's Irish town area where he has a cottage. He describes himself as "the baby of the family", the youngest of four children born to Rita and Eamonn Farrell. His father is a former footballer. Farrell quit school at around 17, or rather school quit him, as he recalls. "I was thrown out", he explains matter-of-factly, admitting that he was extremely lazy. "School just never held my interest, because I always knew, in the back of my head, that I was never going to be an accountant, mathematician or anything to do with academia at all. The only thing I thought I MIGHT do was write, but then, fuck that, I wasn't any good. I realised I just couldn't take school any more and got thrown out."

Farrell began doing odd jobs, first in his father's newsagency, then in a bank and a men's clothing store, before he finally decided to try his hand at acting, despite his very working-class upbringing. "I guess watching films as a kid fuelled my interest." At first Farrell's dad laughed when he divulged his plans. "I remember him asking me: 'You want to be a fuckin' play actor? Is that a real way for a man to make a livin'? But he changed his mind when the first pay cheque came in. Now dad couldn't be more pleased."

Farrell started out as an actor in Owen McPolin's low-budget Irish feature, "Drinking Crude", and his performance caught the attention of an agent, who signed him up. He joined the Gaiety School of Acting in 1996 and dropped out after a year when he got the part of Danny Byrne in the hit Irish TV series "Ballykissangel". Then he played a semi-autistic 17-year-old on the London stage in the play "In a Little World of Our Own". That performance caught the attention of Kevin Spacey, who himself was treading the boards in London at the time and who suggested Farrell play one of Spacey's criminal sidekicks in "Ordinary Decent Criminal". But it was his breakthrough performance in "Tigerland", a tight, gritty drama set in a Louisiana boot camp in the autumn of 1971 that took Hollywood by surprise - and by storm.

Farrell's charismatic, star-making performance as Bozz, the cocky, rebellious soldier took the attention of critics. Farrell's "good looks and charisma speak well for a vital Hollywood career", noted Variety, while Entertainment Weekly commented: "charismatic Irish actor Colin Farrell's anonymous days will be behind him after this". Farrell found the world première of "Tigerland", "absolutely nerve-wrecking - because I'd never seen myself on a cinema screen before. I was in America, working on the accent, when "Ordinary Decent Criminal" opened in Ireland. So I was on the phone to the mother and the sisters and they were outside the cinema in Dublin with the mobile phone and the champagne in their hands, telling me they had just seen it." Sustaining his Texan accent was the most difficult thing for him on the set of "Tigerland". Says Farrell, "Hitting it every now and then was easy enough, but it took a while just keeping it going all the time and getting to the stage where you're not thinking about it one bit, when you can throw it away and you don't hear your voice anymore and you can listen to everybody else. I worked so hard on it. I put everything I had into it."

The film's critical success in the US, led to a flurry of big movie offers. First cab-off-the-rank following "Tigerland", is his starring role in the Western adventure, "American Outlaws", in which the very Irish Farrell becomes the iconoclastic American rebel, Jesse James, in a film inspired by events, but not necessarily based on them. Making the film was the ideal fantasy-come-true for this young actor from Dublin. "As a kid, even back in Ireland, I knew who Jesse James was and all those characters, and I used to play cowboys and Indians, so to get the chance to play Jesse James in a Western is every kid's wet dream, you know?"

Farrell says that he resisted taking the part too seriously and decided against over-researching. "It wasn't about the research in this job, because it's a completely romanticised account of what went on; we weren't restricted to be confined to a sense of historical accuracy." But for added realism, Farrell DID choose to do his own stunts, "or as many as they'd let me, because I just felt it was nice to know it wasn't a stuntman doing it." These included some wild horse riding scenes. "I mean, you're 24 and someone asks if you want to go on top of a train and jump through a window and ride some horses, what's a fella to do then?"

Farrell is riding high. Next up, he re-teams with his "Tigerland" director Joel Schumacher for the tense thriller "Phone Booth", "which was such pressure to shoot since we had to complete the fucker in 16 days, but it was an amazing experience. I owe so much to Joel; I'm sure we'll work together again soon." Then there's the big-budget "Minority Report", in which he stars opposite Tom Cruise in a Spielberg-directed big summer movie.

"You spend years watching a Cruise or Spielberg movie, and then you end up working with them. The first day on set I was shitting myself; I could hardly speak." But that soon changed, Farrell adds.

Refusing to live in Los Angeles, Farrell still calls Dublin home and remains close to his family. "My sister works as my assistant on most of my jobs and my folks have been out a few times. I'm looking forward to going back to Ireland and make a movie there." At least this fast-talking Irishman hasn't lost his sense of perspective.