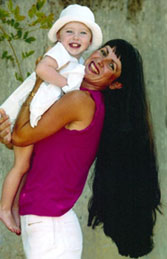 Clairol Nice'n Easy
..WHAT DOES YOUR HAIRCOLOUR SAY ABOUT YOU?

So, is it true what they saySdo blondes really have more fun, are brunettes sassy and smart and are redheads as intense as their haircolour? The results of a recent Clairol survey* conducted in America reveals all.

Do blondes really have more fun? According to the results of the Clairol survey, there is no doubt about it that blondes are more flirty and fun than their red or brunette counterparts. Blondes are perceived to be the most glamorous, are viewed as the wealthiest and enjoy being pampered the most.
However, despite the riches and the grooming, blondes are considered the most relaxed and laid back.

One statistic that may not please the brunettes and redheads on the street though is that blondes are also the most likely to be noticed by the opposite sex! Nearly half of the women that were surveyed said a blonde would most likely turn their partners head, versus any other haircolour. So, its no wonder women are less likely to trust their husbands or partners when a blonde is nearby!

Are brunettes as smart as theyπre perceived? Indeed they are according to the Clairol survey! Brunettes are perceived as leaders ≠ women who are strong, trustworthy and competent. In fact, if a woman were to be elected as the next president of the United States, a brunette would have the best chance and if the CEO of a company could only hire one woman based on her haircolour, she would also be a brunette.

There is another side to a brunette though. When asked, women of all haircolours agreed that brunettes are "the face of practical advice".
Brunettes are believed to be the best at managing money and are considered to be true best friends who are most likely to be trusted with deep secrets.

Are Redheads as Intense a their haircolour? According to the Clairol survey results they may be too hot to handle! Compared to any other colour, redheads are considered to be the biggest risk takers.

An overwhelming number of men also think redheads have better love lives than blonde or brunettes..perhaps that's also why half of all the women surveyed said if they could change their haircolour for a day, they would become a redhead!

Whether you are a glamorous blonde, sassy brunette or sizzling redhead, why not enhance what nature gave you and use Clairolπs Nice'n Easy haircolour. It's quick and easy to use, works with your own natural tones and highlights to give a rich natural looking results and even covers 100 per cent of grey.
Whatπs more, there are over 20 shades to choose from, so you are sure to find one to suit your personality!