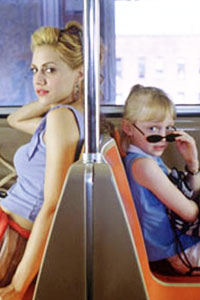 Brittany Murphy seems genuinely surprised that the 25-year old beauty has become something of a teen icon. The star of some 30 films including her latest, the comedy Uptown Girls, merely exclaimed "Really" and "no way" when the whole teen icon thing was suggested when we spoke at a Los Angeles hotel recently. After finally giving the matter some thought, she simply feels that:"It would be an honour to be able to affect people that way; I want to make the world a better place, which I know sounds pretensions, but it's true and that's what I've always wanted to do. I didn't know what medium it would in, acting, music whatever, so I got out of Jersey and started acting and that basically parleyed into us being here today," says smilingly. Despite her varied career, though, including a year-long stint on Broadway opposite Anthony LaPaglia in All my Sons, the media's recent fascination with the actress had more to do with her brief fling with fellow actor Ashton Kutcher, than her merits as an actor. Though reluctant to talk about her private life, when it comes to discussing it in relationship to the media, Murphy speaks candidly and at length on the subject. "Well first off, regarding that specific relationship, one great thing I've learned is, to never speak about my private life in print again. So basically, the rest of this is not adhering to my rule, but I will just comment on that," she says, somewhat emphatically. "Here's a couple, who become friends, and then 10 months later, start seeing each other as girl-friend and boy-friend, then a month after that, they start doing press for a film. The lines after that then became quite blurred between the press that we did for the film together and what our actual relationship was in real life.

"Even that became confusing which is really sexy for the media and if I was a member of the media, shoot, I would write about it. I was shocked that people were interested, thinking that it must be a really slow day in the news, and I still think that about me when stuff is written," Murphy says. "It's just a little bit shocking, but funny. The most important thing is, I grew up around this kitchen table of people and these wonderful influences in my life and I am really, really close to my family and everybody, and almost to a fault, I don't take myself seriously. So, in one regard that's really good and in another that can get you into trouble. But I find as far as misprinted stuff goes, I find quite insulting, but because it's insulting, it's funny. When you're in the middle of something, a lot of times you don't realize that it's happening and I'm sure everyone can relate to that in life, but afterwards you just go 'Whoa, my gosh. Is that what really happened? That's priceless,' but it was really funny to me and I know never to allow that to happen again. Fool me once, shame on you. Fool me twice, shame on me." Murphy was also linked to rapper Eminem, with whom she starred in last year's 8 Mile. Refusing to confirm or deny the rumours, Murphy has a lot of genuine praise for the rapper. "To me, he was Marshall. He's a family man, an extraordinary worker and gives everything to his daughter. He's one of the hardest working, determined, brilliant people that I have ever met in my life and I think that it's great that the world is getting to know different sides of him. He's constantly been judged for what he says, tongue in cheek, and finally people are realizing a lot more about him which is great," Murphy says, with genuine enthusiasm.

As for Murphy's OWN take on her rising fame, she tries to deal with it with typical good humour over. "It sounds like I'm in denial over it. I don't see a therapist so this [doing interviews] is like self-analysis, so I realize, that yeah, I am probably in denial over it." On her current love life, all that Murphy will admit is that "I've been very in love for a long time and I'm in a healthy, wonderful relationship."

Equally healthy is her movie career that continues to grow in leaps and bounds. Trying her hand at another comedy following Just Married, Murphy stars opposite 9-year old Dakota Fanning, as Molly, a wealthy socialite who has to look after a snooty child when she finds herself impoverished, in Uptown Girls. Murphy says that she immediately fell in love with the fairytale aspects of the comedy. The thing that drew me to it was that when I opened the script there was pixie dust sprinkled everywhere and it was like opening up the Never Ending Story when he opens up the book in the attic and all of a sudden, magic. That's what this story was to me and that what Molly was. It was something that was kind of bigger and greater than something that could be contained in that page. It was a really full blown person that I immediately just understood, from what I read of her." Murphy says that she felt an immediate connection with her latest on screen character. "She has something that [co-star] Marley Shelton calls 'artful chaos,' and that's our common link, and also this love of life; there are no ulterior motives in Molly. Although she has all of these material things, they don't matter. What matters is heart and humans and she really is a true humanitarian, which is what I love about her." Yet in own life, Murphy doesn't quite know how that 'artful chaos' manifests itself. ."Well I think that's for someone else to see. I don't think if would be the case if I knew how to describe it, if that make sense," she says laughingly.

Murphy can also be heard on TV's anarchic King of the Hill, as sexy Luanne Platter. "It's the best job in town", she says, and continues her loyalty to the show. "I think this season Luanne moves back with the Hills and I think we'll see a lot more of development of her character. Doing that show has meant a lot to me and I love it." No matter how big a movie star Murphy becomes, she remains loyal to a blonde cartoon character, and in this town, that says a lot.