SILBERLING GOES IN A LOST DIRECTION.

Brad Silberling is one of Hollywood's most diverse directors, from the likes of Casper to his hauntingly beautiful Moonlight Mile. His latest film is different again, the hilarious prehistoric comedy, Land of the Lost, inspired by the TV series and starring Will Ferrell as a dim scientist who finally figures out a way of travelling back in time. The acclaimed director talked to Paul Fischer in this exclusive interview.

QUESTION: Now, when one looks at your track record, this is not necessarily the kind of movie that one necessarily expects from Brad Silberling. I'm just wondering how you became involved in this project, and how it got to you in the first place?

BRAD SILBERLING: It's funny. Well, I love your perspective. Because I - somebody yesterday just gave up. And they were like, "You know, we were about to say this is a departure, but we can't really - we're looking at all the films, and everything is sort of so spastically different." [LAUGHTER] 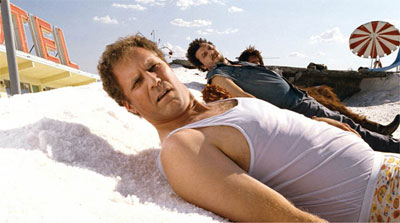 BRAD SILBERLING: Yeah. This one came about pretty romantically. I was in the middle of writing another original project, and I was going to grab lunch - had Will in mind for something I was writing. And he and I have just known each other for years, but never worked together. And so we just - we hooked up to grab a meal, and he kind of waylaid the conversation, and just kept blaming that he was hoping - you know, from one month short of figuring out the pre-SAG strike movies - not that that's relevant any more, but it was two years ago. And he told me about it, and wanted to see if I'd be interested. And that was really out of an express desire, A, to work together, which we shared. And B, he just knew that I was probably also, like him, old enough to have been an original watcher, which I was. And had not set eyes on the show since it was on the air. I hadn't any of the sort of DVD re-releases. But, I mean, what's frightening was how the images and a lot of the story lines just get burned in your brain at that age. So, the idea of the world, and just trusting in, and characters - you know, that world just made great sense to me. So that was kind of how it happened. We really just wanted to work together. 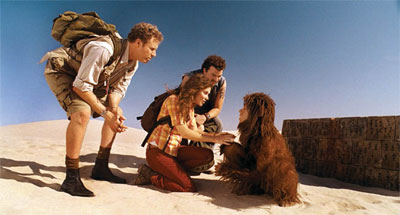 QUESTION: I never saw the original show, but, once Will Ferrell was kind of on board with this, did the tone change dramatically? .

BRAD SILBERLING: Oh, night and day, because the original show was truly a - it was a children's program. It was on Saturday mornings. It was at a time, in the '70s in the States, where programming was supposed to have an educational content. So every show had a family lesson. And it was a father, and two kids. It was a father who had been out on a raft, on a routine expedition with these two kids. And you never quite really understood who the father was. He had a vague sort of adventure uniform on, but you didn't know - I think they later told me he was a ranger, but I had no clue, and they never really described who he was. But the tone of that was very earnest. It was exciting, as a kid, to watch, because it was creepy. There were these backs that were dinosaurs, that were constantly confronting this family and it was a little Swiss Family Robinson, actually. This family having to fend for themselves, and forage, and try to find a way home. It's very existential, because they never get home. And so tonally, this is - yeah. What we did was, it was sort of like taking the elements that excited us the most from when we used to watch the show. And we thought, "Man, if you actually take the wrong set of characters and thrust them into that world, it could be really funny." And so tonally, very, very different.


QUESTION: So, I take it the early or initial drafts of the script were already in keeping with that kind of self-reverential, satiric elements that eventually turned up in this version. Or, was there more adventure and less comedy in the original? In early drafts? 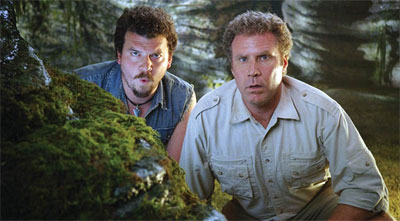 BRAD SILBERLING: Well, again, the show itself was very much centered on the father and the kids, and their week-to-week survival. But the Kroffts - and again, they'd have to tell you more about it. But I know that over the years, they had, I think at one or two studios, tried to develop very straightforward film adaptations of it, so probably, again, very earnest adventure. And I never saw those. And I think what happened was, they had sort of foundered. And it was when Will - the Kroffts ended up being managed over at Mosaic, which is the same management home where Will is. I think when Will got around that they were there, and the property was there, I think he really remembered the show and loved it, got excited about the possibility of doing it. So I don't even think he would have seen any of those. Because it was pretty clear he wouldn't have been interested in going and doing those. So ours kind of was built sort of from the ground up, with Will in mind. So, I couldn't really tell you about the early ones, but I do suspect they were very much straightforward adventure adaptations. 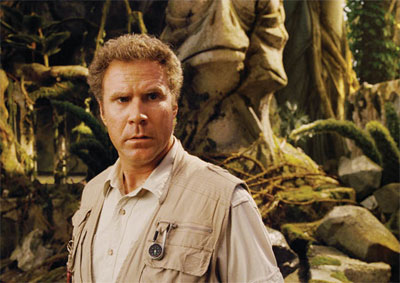 QUESTION: How much did you let Will go? I mean, how much freedom do you give him, once you guys were on set? Because it seems to me there are a lot of throwaway lines.

BRAD SILBERLING: Oh, yeah. Well, the great thing is - every actor with improv skills is different. I mean, what's interesting is that Will - Danny McBride, who's pretty remarkably skilled there, too, they share one thing in common. Which is, they just don't - they're not possessive about their improvisation. You know, if you're on a scene that's scripted and it's working, hallelujah. They have the ability, if you toss them a line while you're rolling, they can ingest it and put it right back out there. And then you can just sort of - you know, again, the extreme version, too - you know what the scene has to communicate, and you can just set them free. And the good news is, nobody clings to it. So, that's what I was most pleased with, you know? You can ask Will to go right, left, or center. And then he'd do it, and then just kind of smile and shrug. And if you were happy, he was happy. And it wasn't like he was sort of cataloging for a year later. "What about that ninth take, the second half? That was the best." So, you know, as a director, it's sort of a nice embarrassment of riches. Because I could ask them to sort of push the limit and go to crazy places. And in the end, if it felt extraneous, great. Don't keep it. But it's crazy not to take advantage of it in a number of situations. So, there's two or three big, big runs that are completely improv'd. 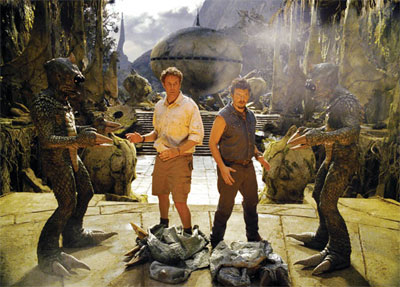 QUESTION: How much of a challenge was it for you to create all these special effects -- to work in a comedy environment like this, while at the same time planning such complex visuals?

BRAD SILBERLING: Well, that's the balancing act. I mean, and I think that's one that honestly comes a little bit with experience. The danger with dealing with effects is that they can lock people up, and you get a lot of effects movies that are very formal. And I knew that for me to believe this world, and to enjoy the sort of spontaneity of the characters in it, I wanted it to feel very off-the-shoulder, and really just like a sort of odd verite experience. And that actually takes even more planning. With me, the trick is to give the actors as much freedom as possible, because otherwise, you're going to take these actors, who are wonderful - very present improv artists, and then just sort of chain them down, which would make no sense. So, again, I'm experienced enough now to remove all of my on-set effects work that I can - I knew where I could give them the freedom, and in the occasional cases where I know I need them all to share one eye-line to a dinosaur, I can do that the most unobtrusive way, but still allow them some pretty great freedom.


QUESTION: Now, even though this is a family comedy, it seems to me that you almost crossed a bit of a line at times. I'm just wondering whether or not there was any material that would have made a great R-rated movie.

BRAD SILBERLING: [LAUGHTER] Well first of all, you've got dinosaurs, and you're going to have a family show. And obviously there's the memory. But we set out to do a very kind of - a real PG-13 movie. Nobody ever really set out to do a soft - a soft, family film, but what we could do is, we went early to the MPAA with my cut, and we never ended up having to sort of negotiate. We were always PG-13. We sort of knew we would always be a PG-13. And so that was kind of it. And - so, no. There hasn't been any kind of fantastic chuck-a-nude scene or anything. 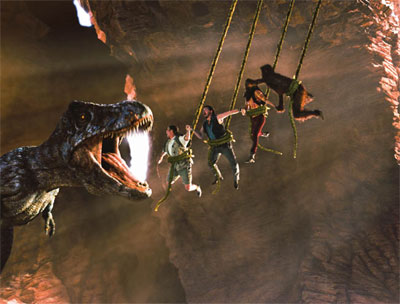 QUESTION: So, we won't be seeing an unrated DVD, then.

BRAD SILBERLING: Well, you know what's funny? There may well be - you know, an extended version, which I would actually enjoy doing. If it's called "unrated" it would be because it is not rated. But it certainly wouldn't be completely honest, in terms of promising any material that is actually deeply more risqué, you know?

BRAD SILBERLING: I usually - I usually do and that's part of the mental survival skills. You go through the minutiae of a movie like this, and use that, because you direct 95 days, or 82 days, with actors and your crew. And then you have to make the post for another year with the effects house. It does make you yearn for the simplicity of just a nuts and bolts intimate script, and actors.


QUESTION: Do you have a particular project in mind?

BRAD SILBERLING: Yeah. Again, without getting into too much detail, the piece I was writing when Will and I first sat down, which is ultimately a character-driven comedy - it's a bit in a world in the vein of The Russians Are Coming and The Mouse That Roared. A bit of a social and economic satire. But very simple.

Land of the Lost

Will Ferrell stars as has-been scientist Dr. Rick Marshall, sucked into one and spat back through time. Way back. Now, Marshall has no weapons, few skills and questionable smarts to survive in an alternate universe full of marauding dinosaurs and fantastic creatures from beyond our world--a place of spectacular sights and super-scaled comedy known as the Land of the Lost.

Sucked alongside him for the adventure are crack-smart research assistant Holly (Anna Friel) and a redneck survivalist (Danny McBride) named Will. Chased by T. rex and stalked by painfully slow reptiles known as Sleestaks, Marshall, Will and Holly must rely on their only ally--a primate called Chaka (Jorma Taccone)--to navigate out of the hybrid dimension. Escape from this routine expedition gone awry and they're heroes. Get stuck, and they'll be permanent refugees in the Land of the Lost. 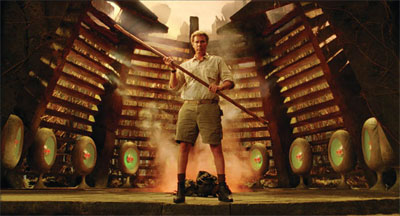