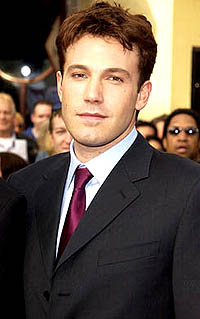 AFFLECK POKES FUN AT HIS OWN FEARS.

As Ben Affleck contemplates turning the big 30, the Hollywood star talks to Paul Fischer about Jack Ryan, Daredevil and how he has coped with a tumultuous year on the personal front.

Ben Affleck may be about to turn 30, but he wants it known that his upcoming party should be no big deal. "I'm not too fired up about turning 30", he comments. So what DOES turning 30 mean for the young actor? "All my friends who are my age are getting married and having kids. So I think, Oh, THAT'S the point after which if you're not starting to think about those things, you're not fun and in your twenties, you are immature and in your thirties and have a Peter Pan complex," Affleck responds laughingly. But the actor does, of course, aspire to have a wife and family, adding, "I really want to do that eventually. I think that would be much more satisfying and interesting for me personally in my life, rather than just to continue to make movies and do this. There is that other step of life, which is love, wife and children."

Affleck recognises that he is at a threshold in his life, following what has been a difficult year for the Hollywood star. "I'm absolutely at a point where I feel that what will be important to me is not JUST work but something kind of beyond that and I also anticipate that I really do want to have a family and take those steps and I finally feel ready to do that." That also includes a much healthier life referring to last year's bout with his much publicised rehab stint. "It's so much more important to me now to be healthy and take care of myself. I've been working out a lot for "Daredevil" and I'm really maintaining a healthy lifestyle, which feels so good. Obviously, that makes me happy, which I prefer feeling than not, and that happiness doesn't necessarily hinge on whether people like your movies or not."

For the 29-year old, these past 12 months have certainly been quite the year, both personally and professionally, with the tabloids going overtime with his rehab period, not to mention a rumoured love life that is being plastered over the Australian and British tabloid media in particular. While Affleck, who was in town to discuss his latest film, "The Sum of all Fears", wouldn't be drawn on any more specifics, he said that he has learned how to deal with the tabloid media's obsession with his private life, insisting that he copes with it all. "I am realising that most of what is written is not written about ME, but has more to do with the people writing it and I just disassociate myself from it. All I can do is focus on my work and what I do there, and focus on being a good person, and properly conduct myself with my friends and family. I really can't do anything about the rest of it, so I just have to let it go."

Affleck's private life may have been in the spotlight, but that hasn't stalled his professional career. Currently shooting the comic book adventure "Daredevil", the actor was recently seen in the critically acclaimed "Changing Lanes", and currently stars as the new Jack Ryan in "The Sum of all Fears". In it, he plays the character of a rookie who inadvertently becomes involved in a terrorist plot against America.

Affleck relished the chance to play Tom Clancy's CIA analyst, having, he said, "been a huge fan of both the movies and the books. I really loved this franchise, so it was a big deal for me to do this." Affleck is the third actor to step into Jack Ryan's shoes, but as the character remains closely identifiable with Harrison Ford, it was an even bigger deal for Affleck to step into THOSE particular shoes.

"I certainly don't liken myself to Harrison but obviously I'm a huge fan of his and only look at his career, and what he did, with humility. I know I wouldn't have done this film if somehow I had to follow what he did and step in and continue that", he explains. "When they first called me about it I thought how impossible this was, but what I thought was interesting was taking it back showing this guy when he was green, new and a little bit unsure of himself and making mistakes. When you see who this guy is before he polished himself up, when he was rough and uncertain, THAT was something that Harrison Ford wouldn't do," Affleck adds laughingly. "THAT I knew I could do, playing a guy who was still learning on the job and still figuring it out; I can't play an icon and I certainly can't follow one." 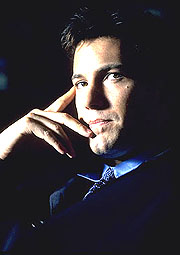 While some may argue that Affleck's Ryan is too young to play someone who ultimately earns the trust of some powerful people, the actor did visit CIA Headquarters and found many analysts his age working, so the film is far more credible than it seems. "I was there for a few days and there are an awful lot of analysts who are my age. When I visited the Russia Desk in particular, it's kind of like the graduate department of something like Russian Studies at George Washington University, a very academic environment. Ryan comes to the point where he has his degree, had his time in the military and so it's pretty accurate that by 29 years old, you might have been working there for about 18 months and just starting out as an analyst."

While the two previous Ryan films were instant hits, having Affleck on board imposes a lot of unwanted pressure on the actor for the franchise to continue, but it's a pressure that he dismisses. "Yeah, I'd hate to be the guy who screwed up the Jack Ryan franchise, because they'll put that on my tombstone."

Prior to the release of "Sum of All Fears", Affleck received some of his best notices in the US for the riveting "Changing Lanes", in which he plays a seriously flawed lawyer in that risk-taking movie. For Affleck, the challenge to play such a distinctively imperfect character was irresistible. "Basically, my simple plan is to try and do a movie like "Sum of all Fears", that has a shot to make some money in the eyes of the people that run the town. If I do that, then I'm in the position to be cast in movies that ARE more risky like "Changing Lanes", that's a little bit more interesting. Because those kinds of roles aren't as straight down the middle, they tend to allow for more range. Such as in "Changing Lanes", where I was allowed to play a guy who is essentially the protagonist in the movie, but who was a deeply flawed, fucked up guy, who made a lot of really bad decisions and wasn't particularly admirable in ANY way." Asked if he could relate to that character, Affleck pauses before laughing. "Do you mean do I think of myself as a deeply flawed, fucked up guy? Only when I read what you write about me."

While Affleck says that it's hard work doing movies like "Sum of all Fears" and "Changing Lanes", to a different degree, that didn't stop him from starring in the physically exhausting "Daredevil", another Marvel comic strip set to hit screens next year. "I had no qualms about doing that, because that was a comic that I SO loved as a kid, that if I hadn't done it, I'd just hate myself." Part of the challenge for Affleck, was playing a kind of blind character in "Daredevil". "He's not exactly blind, because he has this kind of sonar ability, so he doesn't see through his eyes, but more in a 360 degree way, seeing more objects, than texture. That's been a challenge and quite hard, because is he blind or not blind? I don't have eyes at the back of my head, so I had to do all these tricks. They gave me these contact lenses that actually MADE me blind, but the problem with that, was that I really do walk into tables and stuff, which he wouldn't do, because he's a superhero, but it's a challenge and we're working on it", he explains chuckling.

On future projects, Affleck says that he hasn't signed for any more Ryan films. "The reality is, like any movie, Hollywood's basically success-driven. If the movie does well and people go see it, they'll want to do another one." The actor hopes to star in the new Kevin Smith film "Jersey Girl" and hopes to continue his collaboration with his Oscar winning friend Matt Damon. We'll also see the star opposite Jennifer Lopez in the upcoming "Gigli".