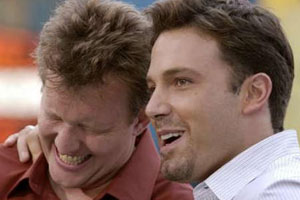 Ben Affleck was in a good mood when doing the PR rounds for the latest Project Greenlight film, The Battle of Shaker Heights. While the press was being scrutinized by HBO TV cameras during this unusual junket, Affleck may have preferred to talk Greenlight, but clearly the focus shifted to another film. While his Project Greenlight films cost no more than $1m, Affleck is content to star in Hollywood blockbusters, far removed from the Indie world from which he came. Yet as big a star as Affleck is, he admits he misses working on small films and worrying about the kinds of celebrity issues that currently plague him. "I remember like sleeping on Kevin's couch and doing Chasing Amy which was all that mattered, that is all I had to deal with and the future was nothing but wide open. Then the more you live, the more things happen, the more you define your life and that's what it is." Affleck adds that going through an experience such as the low-budget Shaker Heights, reminds the actor/producer not only why he is in the business to begin with, "but it kind of reminds me at times that I get distracted by other stuff that's part of this business that's really irrelevant. It reminds me of when I was doing movies like Glory Days or Chasing Amy where we had no money, we were rushing all the time and it was sort of the best times I've ever had on a movie set and so doing the Project Greenlight films reminded me of why I love doing this, why I think movies are important, why it's important to bring people into this process and that to me is what is really invigorating." What is NOT so invigorating is being reminded that amidst his successes, come the flops, but despite the huge failure of Affleck's Gigli, here in the US, he has no doubt as to why the film didn't work and remains genuinely philosophical on the subject. "I think actually like scene by scene there's really good stuff in there, but I don't think it hangs together as a movie, so I think fundamentally it doesn't work, but I mean the worst movie of the century? I accepted what the movie was going to be beforehand going into it. It's not fun, but I was sort of prepared for it," Affleck admits. In fact, I felt like it failed so SPECTACULARLY that it was kind of fun and I got a real kick out of it," he adds, laughingly. "I feel like at least I can say I did nothing small either succeeded grandly or failed grandly, so I think you must have perspective on it. I'm at a point where maybe four or five years ago this would have seemed like the end of the world to me, but it's doesn't really. I feel very comfortable and I'd feel a lot worse if I didn't like Paycheck and Jersey Girl so I feel I got a little room to breathe."

Affleck remains unconcerned that Jersey Girl, which also features fiance Jennifer Lopez, could suffer the same fate as Gigli, "because I think fundamentally it's about the movie. I really think that if the movie works, people will see it. There's a lot of conventionalism, 'Oh, you can't have this with real life couples'. Maybe that's something to it. I'm sure the fact that the unending story, the diarrhoea of publicity from these magazines about me and Jennifer and where we go, what we do, what we eat must make people want to like feel why buy the cow when you can get the milk for $2.99 at the cashier at the newsstand? But, the problem is, ultimately, the movie's got to work. The thing about Jersey Girl that I really like the movie and Jennifer is really only in it for about 15 minutes, but I'm sure they'll find a way to market it so it does feel like a Ben and Jen movie," he adds laughingly.

Affleck is also enthused about Battle of Shaker Heights, a mature teen comedy, revolving high school senior Kelly Ernswiler for whom life is war - or, at least, it's simulated war. In all his 17 years, Kelly has found just one true passion: re-enacting the epic battle scenes of World War II. When he meets Bart Bowland, a fellow war re-enactor who is Kelly's direct opposite, his life takes twists and turns he never expected - including a real-life Special Ops mission against a school bully, an ongoing battle with his outrageous family and the epic teenage crush of a lifetime. Shaker Heights was selected as the best script out of some 4000 submitted, and trying to come up with a winner, Affleck says that he and fellow executive producer Matt Damon look for "originality, complexity, humour and resonance." This time around, Shaker Heights is being treated differently than the first film, Stolen Summer, and Affleck says that he avoids the mistakes that plagued the first film. "Last time the release pattern was a mistake and we were really glad that Miramax is now kind of going with the top ten markets rather than taking the travelling salesman approach where you have a guy kind of pitching the film cans and you go to Philly and it runs for a week there and then you go to Montreal and one week there. People are accustomed to have national releases and the kind of publicity that we have with the television show is really geared toward a national release or at least a staggered first week, second week, third week kind of thing if it works. So, that's the first thing you do is you go out when the show just ends, the movie is released. Second of all, making a movie is hard, you know and every time you fail at it and do something that you're disappointed with you, you try to learn from it and refine it."

Perhaps that philosophy can equally apply to Ben's life. Though trying to focus on his career as an actor or producer, Affleck admits that his celebrity status can get in the way. "I think for one thing it makes it difficult for people to suspend this belief when they come and watch a movie because all they know is this other bullshit about you. Even if they don't want to, you're hit in the face with it. I stopped watching TV now because it's too much; I watch sports." As for recent media reports that Affleck went to a strip club in Vancouver, the actor shoots down any question related to that incident. "You can tell your editor that you are too big for that kind of stuff, that you are better than that, that you rise above it.," though Affleck did say that Jennifer "was doing very well thank you."

Professionally, Affleck is genuinely excited about Paycheck and Jersey Girl, both opening later this year, and hopes to do a Project Greenlight 3. "We're really trying, but it's going to depend on the ratings ironically because it was really tough to get HBO to believe that they can have a dramatic show. They want to do it again, so, now we have to go back to Miramax and making a deal with them is always a really prolonged and difficult process," Affleck admits.