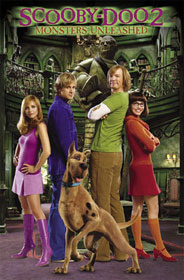 Alicia Silverstone Goes to the Dogs

She may not be the star of the pooch comedy, but beautiful Alicia Silverstone, who recently debut on Broadway in The Graduate, knows not to take herself too seriously, especially playing a newscaster in the sequel to the hit comedy.

Did you base your character on anyone in particular?
Alicia Silverstone: [Laughs] No, not really. I just had fun with, you know, when you watch newscasters and they have that certain affected voice that rounds at the end. It's just so funny. I had fun playing with that. Sometimes, there will be one thing that I'll pick up in the script, or that I'll just make up and get so excited about, and then create the whole thing around it. So, for me, that was the idea that I was the mayor of the town. I just decided that my character, Heather Jasper Howe, was truly just trying to protect the citizens of Coolsville and, with all her heart, she is so devastated that Mystery Inc., who she was such a fun of, would do this to her and put her in a position where she has to report to the public. She's just so devastated. That was really fun, because it's such bullshit, to ride on that and have her really be dedicated, almost like Heather Jasper Howe enjoys being an actress. The guy underneath me has an actor in him that wants to create this character and convince the people that she wants to take care of them and that this is just so devastating. That was just so much fun to do, and that helped me figure everything out.

How was it joining a sequel cast?
AS: Well, I was lucky, in that I didn't work every day, so I got lots of time off to do other things and wander around. So, the amount of time that I was with them was so short that it just was what it was. But, they were so cool, and everybody was really great. I'd worked with Matt Lillard before on 'Love's Labour's Lost,' very different movie, so I felt some kind of excitement to get to see him and work with him again, and see where are lives had [taken us]. We've both grown up so much since that time, and things have changed so much for us, that it was neat to experience that with him. But, I didn't even get to say one [word]- - we didn't get to work with each other at all. We were just around each other. Same with Seth Green. I never interacted with a lot of the actors. We just were all in it together. But, it was a really cool cast of people and they're all really nice. I wasn't on set much, honestly. It was one of those great jobs where you don't have to work a lot and you still get to be a part of a great thing. I would just wander around Vancouver and go on dates with myself, and enjoy having dinner in a really neat, nice restaurant by myself and watch people and work on my character. I really had a great time there.

Was it fun to film the cat fight scene between you and Sarah Michelle Gellar?
AS: We had one rehearsal, for an hour or something, one day, where we played with it and kind of worked out what we would do a little bit. I'd never met her before. I remember feeling really good about it. I remember feeling mean. But, the funny part was that her and I were obsessed with the 'American Idol' thing that was going on, at the time. Every time we were together, that's what we would talk about. And so, I'd be really mean to her, and then in between takes, we'd be like, "So, anyway, what do you think about [what happened on 'American Idol']." It was also hard because I actually felt really bad [being mean to her], even though she knows that I don't mean it. She looked so sweet and adorable when she was looking up at me, and I was just shooting her venom and being so mean. I remember having a thought of, "Oh, she's so cute. She's so sweet." [Laughs] I thought, "That's good. She's good. She's making it hard."

Is this the kind of movie you would have gone to see as a kid?
AS: I don't even remember seeing movies as a kid. [Laughs] When I was a kid, I watched 'The Three Stooges' and the tape of 'The Wizard of Oz,' over and over and over again. I don't think I went to see movies that much, until I got older, like 13. Before then, I don't think I ever went to see movies. I went to see plays and theater a lot, with my parents. I don't think my parents would have taken me to this, unless I'd wanted to, I guess. But, I think, for a kid, it's a fun movie. I got really scared watching this, but kids are more used to that kind of stuff. They watch that stuff all the time, so they're probably a little less scaredy-cat than me. But, that opening title sequence was so exciting. It was neat.

Do you hang out with the rest of the cast much?
AS: I didn't, only because I wasn't there as long as they were. When I wasn't working, I think they all were. They were working and I wasn't, so I met a friend there. She was a girl who was a pilates yoga teacher, and I ended up meeting her and her children and going to Bowen Island and having fun adventures with them. I didn't spend as much time with the cast, but I would come in and out so quickly. I was sort of sporadic. But, they were all so nice and I wished we had. I know we were planning on getting together, and then I don't know what happened. I think we could never find a night when everybody wasn't working. And, I never got to see Matt's baby. I really wanted to meet his baby.

What was your favorite characteristic of the character you played?
AS: I think just the falseness in her motivation. I really liked that she was convincing the people of Coolsville that she was protecting them and, meanwhile, she was really trying to kill them and hurt them. I just thought that that was fun. [Laughs]

Is 'Miss Match' coming back?
AS: Well, I won't find out until May, when they tell all the shows what happens to them. We'll see. I just finished shooting about two weeks ago.

What have you enjoyed about having a television series?
AS: It's so exciting for so many different reasons. One of the most exciting parts is getting that script every eight days, or whatever it is. I can't wait to read it to know what's going to happen to me next. With movies, you know exactly what's going to happen to you, from beginning to end. On this, it's like, "Where am I going to go? What am I going to do? What's going to happen?" There's one episode that's coming up where Kate Fox gets really drunk and drunk dials her ex-boyfriend, and that is a really fun episode. To be reading that, it was just so exciting. Like, "Oh, my god, that's so exciting." And, I know everybody can relate to that, I'm sure. Or, at least, I know I can. So, it was just neat. It's always neat to know what you're going to do. And, I get excited about what's happening to all the other characters and where they're going and what adventures they're going to have. And then, it's just really fun because it was such a collaborative experience. I really love working with NBC. I love Jeff Zucker and I love Brian Grazer, over at Imagine. I feel like I have such a great relationship with those guys. And, all the actors were so great. And, I just loved my character. I've been having so much fun. It's just great all around.

Do you have any plans if the series doesn't get picked up?
AS: Well, I'm on my hiatus now, so I'm probably going to start a movie. I have to pick one in the next week. So, I'm going to be deciding in the next week, and then I'll probably start on a film in three or four weeks. And then, I guess, if it doesn't get picked up, I'll just do more films, or produce something, or do something -- whatever is exciting at the time.

What kinds of films are you deciding between?
AS: Well I can't tell you. All different kinds. [Laughs] All different, interesting roles. It's hard to pick, sometimes, what you're most in the mood for. I'll probably pick the one that I'm most afraid of. That's usually what I do. And, there's definitely one that gets me all scaredy-catish.

Your 'Miss Match' character is always setting somebody up on a date. Can you remember your worst date? Ever been on a blind date?
AS: I remember my worst date, but I've never been set up on a blind date. I always wanted to. I thought that would be so neat but I've heard it's not. But it sounds good, it just sounds like a fantasy.

Ever made a match?
AS: Well, I have, but it wasn't like my invention. I remember when I was doing The Crush, Jennifer Rubin whispered to me that she had a crush on one of the guys who was Cary Elwes' assistant at the time. So I ran over to Cary being a 15 year-old busybody that I was and said to the guy, "Do you like Jennifer?" And they ended up going out. So I was the cupid between them but I don't think I invented the idea.

Are you going back to Broadway anytime soon?
AS: I hope so. I really hope so, soon.