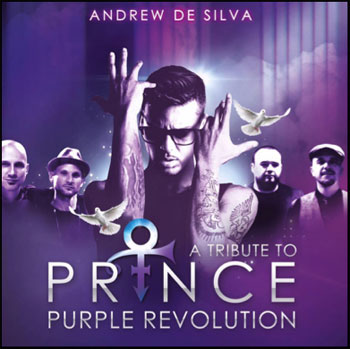 After recently finishing up, a successful promo campaign with Andrew's band CDB (for their new album release: -Tailored For Now' (which Andrew produced) - as well as forthcoming CDB shows with: Keith Sweat (July), CDB shows in Melbourne & Sydney (August) and CDB shows with Peter Andre (November), one of Australia's busiest singers/musicians, Andrew De Silva, is now the lead singer of -Boom Crash Opera.' In addition to all of this, most people have been excited to witness more shows with his 'Must See" -A Tribute to Prince – Purple Revolution' Tour!

Andrew on Prince: 'Prince has been a major influence in everything from my singing, to guitar riffs to my bass grooves, live performances & production.  He's been very inspirational artistically as well.  Never afraid to be himself.  I love being a multi instrumentalist as well.  I always felt that it was important to play as many instruments as possible on a track. because its all coming from the same soul.  Prince was the ultimate inspiration for this.  As time passes after his death, I realise that we may not see another one like him again.  So thankful to have been able to see him perform a few times.  Apparently he's even seen footage of me! When I sang one of his songs with his drummer - John Blackwell on -Good Morning Australia' back in 2006.  I hope he approved!"

When watching Andrew with his band or as a solo artist, you can't help but be blown away buy their world class performance.  Specializing in R&B/Soul/Rock/Pop, Andrew's versatility is what gets people every time.  Able to win over any audience, Andrew is the true Artist who will leave you wanting more.  Join the -Purple Revolution' and celebrate life with music, in loving memory of our Purple Prince.

Whether you know him as the Winner of -Australia's Got Talent 2012,' or from the Multi Platinum ARIA Award-Winning band -CDB,' or simply heard him sing with his acoustic guitar, well-respected Producer/Artist Andrew De Silva is the 'real deal". Humble, yet with a wealth of experience in the industry, Andrew is a seasoned performer.  Opening for mega stars like: Mariah Carey (Etihad Stadium 2013) Boys II Men (2012) and for Shaggy – during his National tour (2015).  Andrew's voice & musicianship has always been likened to Prince, which led him to put together a band -Purple Revolution' a tribute to the diminutive star which reviews have pegged as: 'one of the best going around." Never confined to one genre, Andrew is now the lead singer of Boom Crash Opera.  Andrew's versatility has recently seen him play the lead role in the hit production: -Let's Get It On' (The Life & Music Of Marvin Gaye) –Andrew seems to have done it all & his live shows are not to be missed.

Hearing Andrew sing moves the spirit & leaves you in awe.  We all had a chance to witness this when he sang Sam Cooke's -A Change is Gonna Come' on his -Australia's Got Talent' audition, blowing the judges away with the very first note.  Brian McFadden also predicted right then & there that Andrew would win the show. Well... he was right.  Andrew took out the winning title which many also believed he would.

Andrew is what we call the 'all rounder" – Musician/Singer/Writer/Producer.  Not satisfied with only the stage, Andrew is a master in the studio, making hit music & collaborating with other well known artists.  His talents have taken him behind the scenes, as part of production on major TV Shows such as -X Factor' and most recently the Australian Film -Terminus' (2016).

Andrew is constantly creating.  His original music resonates spiritual and creative flair that showcases his voice & production/mixing skills.  His sound stems from his in depth understanding of song writing and what it is to be current.

'Here's one of Australia's best talents.  It's a deliciously lithe soul number, helmed by Andrew's superb vocal that taps the falsetto in his bag of tricks and the layering of the vocals is pretty sublime." - AuspOp (Single -Rocket Science' review)

* Please note: Juanita will be joining Andrew on stage for the * marked shows.  She will be performing 4 songs as an additional part of the show and to bring to life the duets that Prince did with Sheila E.  Prince always had a way of surrounding himself with beautiful & talented women in music, so Andrew has included Juanita to reflect this.