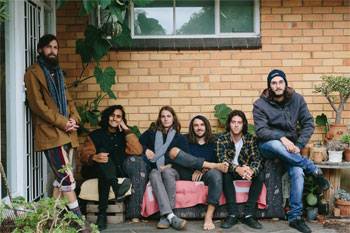 Bojke is the perfect follow up to the band's debut EP Page I.  Considered, intricate and unassumingly memorable, Bojke sweeps broadly, swells and disappears into the ether, gently lulling the listener back down to earth.  Evocative of Fleet Foxes and The Paper Kites, this is indie folk done right; soaking guitars, gentle drums and humble harmony surround the lead vocal as it floats assuredly above it all.  Reflecting on the track, lead vocalist Tushar Singh says, 'The title is an ode to our bassist and his brother's dog who passed away this year; her name was Bojke.  At the time, I had written out these lyrics in a narrative sense, not necessarily written about anyone in particular.  The song had absolutely no relation to me, but I could feel that it could relate to someone else.  A few weeks after I wrote the song, Bojke had passed away.  I instantly linked Bojke to the lyrics in this song and it was strange but so fitting as to how much these lyrics I had written weeks in advance had related to the incident.  I asked the two brothers if I could name the song after her, and they said yes."

The clip for Bojke is in keeping with the theme established in the bands' previous video Took Me By; two friends spend routine time together, during which everything is normal except for the fact that they are masked.  Then, suddenly - two becomes one.  Tush explains, 'The video clip is based on two friends or two siblings, if you will.  The entire clip is demonstrating a bond or friendship between the pair, and it follows the two masked people hanging out casually; almost as if you were watching their day to day life.  Everything flows smoothly until the climax.  You no longer notice two people, you only see one; which in my mind, portrays the death of someone.  This is the part of the clip where it confirms the connection of Bojke and their owners, Olly and Isaac.  You never know when you might lose someone close to you.  The masks used in the clip was to keep the creepy, eerie, but still intriguing visual going from the previous video clip, Took Me By, seeing as we used the same masks in that video too.  We'd love to essentially make a connecting world out of our music videos."

Audiences can gain exclusive access to the special world of The Winter Gypsy on the upcoming east coast tour.  Thrilled to be heading out for some interstate shows, Tush enthuses, 'We like to bring a bit more to our live performances than you hear in our recordings.  We definitely are more upbeat at our live shows, and you can expect trumpet, soaring instrumentals and a range of vibes.  We're very excited for our next tour!"

Question: How would you describe The Winter Gypsy's music?

Isaac Kerr: We're something like… Eerie, soundscape indie folk rock. If you know what I mean. There's a fair range from soft vocal harmony and fingerpicked acoustic guitar through to driving drums with soaring trumpet and guitar solos.


Question: Can you tell us about the inspiration behind the track, Bojke?

Isaac Kerr: The song was originally, lyrically, just a sort of meditation on an urban loneliness, but Tush felt the song had a connection with my dog, Bojke (pronounced boy-key), who died last year. Along with the music video it's now dedicated to her.


Question: What was it like filming the video for Bojke?

Isaac Kerr: It was a lot of fun, but also pleasantly simple! Our first professional video, also filmed by Gerard Wood, was for our track -Took Me By', and it involved organisation of stacks of costumes and props, 50+ friends helping out, a flare, a live chicken, an abandoned railway line… This one was fantastic for us because it was so simplistic but still manages to be quite powerful. I also found it's very hard to breathe through those white plastic masks.


Question: Can you talk about the motivation behind the video for Bojke?

Isaac Kerr: Like I mentioned, the song is dedicated to our dog, so when we were sort of riffing on ideas for the video we kept coming back to trying to capture the sort of sudden emptiness of loss. The white masks we wear were in our first video so we added those in to make it follow on a bit, but also to make it a little eerie. The idea is that this person is reliving these activities they used to do with this friend of theirs, who is with them in the video, culminating in their return to a lookout where you find that the friend in the video is a memory and is in fact dead – the sense of loss as the video ends is pretty strong so we feel quite good about how it turned out. Gerard is great at what he does though, he captures the mood perfectly.


Question: How does it feel to be compared to the Fleet Foxes?

Isaac Kerr: Very, very good – I aspire to even come close to their vocal harmony abilities.

Isaac Kerr: Definitely -Cellar' off our EP – it just builds and builds and builds, with Sean's trumpet and then Jonny's ripper of a guitar solo. I shut my eyes for the whole thing, just get into it, it's great.

Isaac Kerr: I'd like to hear what Julius Caesar thought of Jonny's crispy guitar licks.

Isaac Kerr: They're both so different – playing live is a rush, it challenges you as a musician and draws the band closer together (and I love the energy in our live shows), but recording is contemplative and creative and deep and just as important… In the end recording is where you paint a lasting picture, so I prefer it.


Question: What is the story behind the name, The Winter Gypsy?

Isaac Kerr: We were called gypsies by some of Tush's friends that saw us playing weird instruments in shitty old clothes, barefoot at backyard gigs, and the band formed in winter because the season inspires a lot of Tush's songwriting - so he put 2 and 2 together and it stuck.

Isaac Kerr: Max and Tush were both looking for someone to jam with, and when they gave it a shot at Max's little home studio it went so well that they decided to record a demo then and there, for what turned out to be our first track, -People'. They put together and cool little music video and decided to make it a proper project, so they asked Dave and I to play keys and bass (we'd been in bands with Tush before), got Max's schoolmate Jonny K on electric and eventually roped in our mate Sean on trumpet. This was in the second half of 2015, and we can still stand each other which is a good sign.

Isaac Kerr: Creating that feeling and that story, that image that you can see in your mind but that isn't physical yet. It's so good to just start with an idea, and to jam and create and end up with this good thing you feel proud of, that in some way expresses or explains some part of your mind or your world.

Isaac Kerr: Not gonna lie, a fair majority of it is Mac Demarco. Also Nick Drake, our Adelaide mates Donnarumma and their new EP, a great band from Melbourne called Tiny Little Houses (new record from them any moment now too!) and the tracks off the new Gorillaz album that don't suck.

Isaac Kerr: For me it was Bright Eyes and Neutral Milk Hotel, lo-fi indie pillars of our time, that made me want to play my songs to people. For Tush, the main songwriter, I know it was a lot of Bon Iver, Elliott Smith and The Middle East that pushed him to start writing and jamming.

Isaac Kerr: I hate to seem addicted, but Mac Demarco would definitely be up there – if not, probably Modest Mouse or The Antlers. Modest Mouse just make the best weird, bouncy and lo-fi music out and The Antlers have several albums that make me cry and I want to see how they do it.