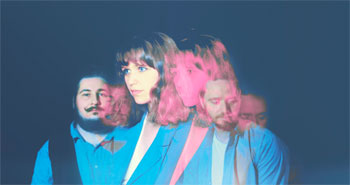 Siblings Emily and Jesse Lubitz and close friend Alex Burkoy of acclaimed indie-folk outfit Tinpan Orange are here to tug at the heartstrings once again with the release of a sublime new video for their latest single -Wanderers' premiered by The Music. Having already announced an Australia tour, straight off the back of wooing crowds across Europe, Tinpan Orange are very excited to reveal some big-name Aussie supports for their homecoming shows next month.

Bringing together highly stylised folk melodies of iridescent string arrangements, ethereal vocals and subtle guitar work, -Wanderers' is an aching refrain of lost love and the longing for human connection and family. Filmed and edited by Sinem Saban, the hazy black and white video for the track echoes the dreamlike retrospect that drifts over the song like thick fog, and the children's toys and dollhouse seem to speak to an unreachable past, creating an atmosphere equal in both hope and regret.

The indie-folksters will be taking the release on an eight-date -Tinpan Orange Wanderers Tour' straight off the back of their massive European Tour in late October. Starting on the coast with a show at The Workers Club – Geelong, the trio will be joined by critically acclaimed indie-folk and blues artist Jess Ribeiro in Melbourne, Sydney, and Brisbane with Lucy Peach supporting in Perth and Seth Henderson in Hobart.

Be sure to catch one of Australia's most raw and honest live acts, when Tinpan Orange bring their emotionally captivating live performance to town.

Tickets are on sale now via tinpanorange.com

Tinpan Orange -Wanderers' is out via iTunes // Spotify