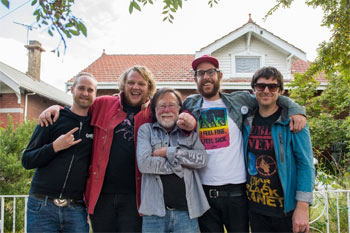 The original –filmed for influential music television show, Countdown– was directed by the legendary Paul Drane who also shot clips for the likes of Little River Band, Skyhooks and Cold Chisel.

Jumping on the back of a flatbed truck The Smith Street Band took to the main street of their hometown of Footscray a few weeks back to shoot the video which emulates AC/DC's iconic 70's film clip for -It's A Long Way To The Top (If You Wanna Rock -n' Roll)'.

'There aren't many more iconic Australian music videos than the one for AC/DC's -It's a Long Way To The Top'! The footage of the band driving down Swanston St on the back of a flatbed truck to the delight and bemusement of passing pedestrians is such a nostalgic and wonderful image. We've talked a lot about recreating that music video and after living in and falling in love with Footscray for the last few years we found the perfect place to do it! But what we didn't expect was to get to work with the one and only Paul Drane who not only directed the famous AC/DC film clip but has also worked with basically every Aussie band worth their salt! So with a lot of help from our friends and the local council we set up our stuff on the back of a truck and drove through Footscray playing our song -Shine'. It was a fun, funny and surreal day that was perfectly captured by Paul and his team in this clip!" Wil Wagner. 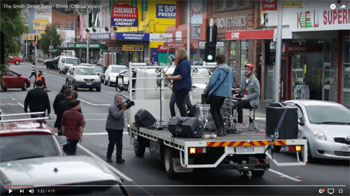 -Shine' is taken from The Smith Street Band's fourth album More Scared Of You Than You Are Of Me which debuted at #3 on the ARIA chart. The band kicked off their Australian tour in Hobart and spend the next few weeks visiting some of the most iconic venues around the country. Watch the video clip, here.

The Smith Street Band More Scared Of You Than You Are Of Me Tour
with special guests Joyce Manor, Ceres and Allison Weiss.