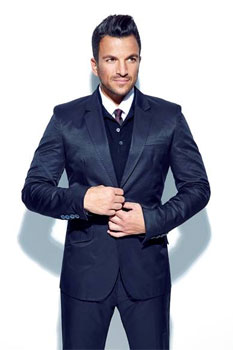 Over 20 Million Record Sales! Born in North London, but raised Down Under, Peter Andre (and his six-pack) will perform his first headline shows here in 20 years! -The hardest working man in pop' recently 150,000 tickets on his Sold-Out UK Arena Tour earning him rave reviews, -Non-stop, first-class entertainment'. To celebrate this Special Homecoming Peter Andre will be performing all his Greatest Hits 'Mysterious Girl", 'Gimme Little Sign", 'Funky Junky", 'Get Down On It", 'Flava", 'All Night All Right" plus More.

Peter Andre established himself in the Australian music scene in the early 90's as a bona fide pop star. Signed to Molly Meldrum's Melodian Records Peter Andre's breakthrough single 'Gimme Little Sign" peaked at #3 on the ARIA Charts in 1993 and became Australia's Best-Seller that year. 1993 also saw Peter personally selected by Madonna to open her Australian Girlie Show Tour. He'd perform the same duty for the likes of Bobby Brown. 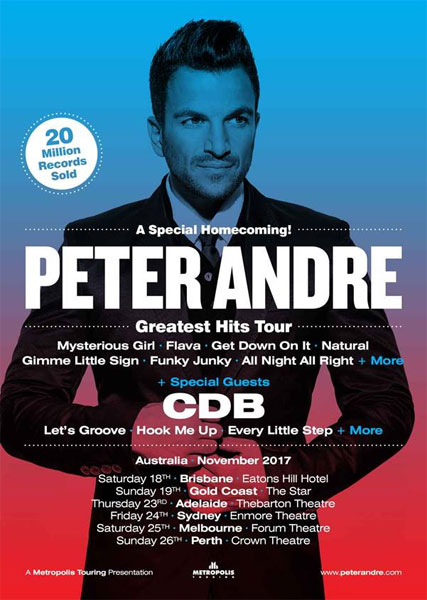 Peter's chart success continued with another Seven Top 50 Hits here including - 'Funky Junky", 'Let's Get It On, 'Get Down On It", 'Flava", 'All Night All Right". Another major breakthrough came in 1995 with 'Mysterious Girl" reaching #1 in the UK and launching his career there. Peter went on to achieve Seven Top 5 UK Hits including Three #1 Singles and a #1 album. 'Mysterious Girl" became a Worldwide Smash Hit.

For many pop idols that may have been the end of the story, not for Peter. His star continued to shine as his television career began. Peter went on to become one of the UK's most popular celebrities with successful projects as a TV presenter and roving reporter and had the most successful reality show in the UK and across Europe. In recent years Peter's career has excelled further by his coffee business ventures, book deals, men's and lady's fragrances and most recently children's books. And he has just been offered his first major movie role to be filmed in Los Angeles next year.

We are very pleased to announce that Special Guests on the tour will be the 90's Masters of R&B, CDB!  CDB toured the world, playing with the likes of Boyz II Men, K-Ci & Jo-Jo and Des'ree. CDB will perform their classics -'Lets Groove'', -'Hook Me Up'' as well as selections from their new album of 90's Super Jams.

'Performing live on stage is what I love doing best" says Peter. Join him as he performs all his Greatest Hits in an evening filled with your all your favourite songs. Peter is one of our greatest international exports, don't miss out!

Pre-Sale Tuesday 30th May 9am
On-Sale Thursday 1st June 9am
From: http://metropolistouring.com/peterandre/