The Killer Inside Me DVD 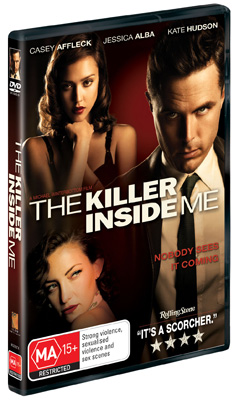 The Killer Inside Me DVD

From acclaimed director Michael Winterbottom (24 Hour Party People) and with a star studded cast including Kate Hudson and Jessica Alba comes The Killer Inside Me. Based on the definitive pulp fiction novel of the same name by Jim Thompson, The Killer Inside Me, electrified and stunned audiences on the 2010 film festival circuit.

Deputy Sheriff Lou Ford (Casey Affleck) is a pillar of his small Texan community, a quiet charmer with a sweet fiancé (Kate Hudson). Ford hides his true nature, until he's asked to run prostitute Joyce (Jessica Alba) out of town and she re-awakens his dark urges. In his first lead role since Gone Baby Gone, Casey Affleck is terrifying as the psychotic Ford, whilst both Hudson and Alba break away from type casting as the women who love him.

In The Killer Inside Me Winterbottom has created a chilling portrayal of a psychopath in the tradition of American Psycho.

Verdict: The Killer Inside Me is a psychological crime thriller that although predictable is extremely horrifying. The violence in this film is expected, but is still shocking and will have audiences, Australia wide, gasping.

The Killer Inside Me is a dark film that will take audiences on a journey through the mind and story of the mad and eerily creepy Lou Ford.

Casey Affleck is convincing in his performance as unbearable Lou Ford. Audiences will be surprised and shocked by the thoughts and decisions, the disturbed murder, Lou makes throughout the film as he becomes enthralled in the killing rampage. Kate Hudson and Jessica Alba both showcase their amazing acting talents in this drama although they are acting as female objects rather than real human beings.

I thoroughly enjoyed the 1950's appearance of the film; from the costumes and music to the Texas location and lingo.

Surprising, graphic and interesting; The Killer Inside Me is for the older audience and I recommend a good debrief afterwards.