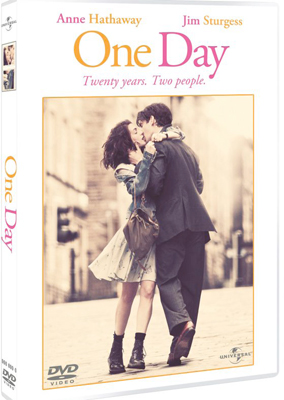 Based on David Nicolls' best-seller and directed by Lone Scherfig, One Day follows the relationship of Emma Morely (Anne Hathaway) and Dexter Mayhew (Jim Sturgess) over two decades, every July 15th. Ever since graduation on July 15th 1988, when the young couple met.

Emma is a shy working-class girl, full of principles with the ambition to make the world a better place who meets her opposite in Dexter, a wealthy charmer who dreams that the world will be his playground. For the next two decades, the film follows the two characters on the same day, reflecting key moments of their relationship over several July 15ths since their graduation. Spending the day together and apart, the film sees Emma and Dex experience their hopes and dreams as well as suffering disappointment and missed opportunities. Somewhere along the way they realise what they had been searching for had been all along, with the true significance of July 15th date revealed to them both.

Set over the course of twenty years, visiting popular culture references of late 80's Britain to modern day London and Paris, the film is beautifully shot and features a superb support cast of Rafe Spall and Patricia Clarkeson. Evocative and timeless, One Day is the story that lasts a lifetime.