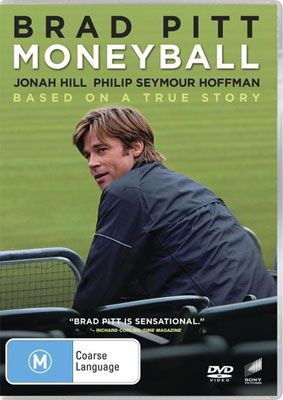 Academy Award nominated flick Moneyball, the most inspiring film of 2012, is available to rent and own on Blu-ray, DVD and Digital Download.

With critics calling this Brad Pitt's best on screen role in cinema, the film depicts the true story of Oakland A's general manager Billy Beane (Brad Pitt) and his attempt to put together a championship winning baseball team on a limited budget by employing a computer-generated analyst to draft his players.

Despite opposition from the old guard, the media, fans and their own field manager (Philip Seymour Hoffman), Beane - with the help of a young, number-crunching, Yale-educated economist (Jonah Hill) - develops a roster of misfits along the way and forever changes the way the game is played.

Nominated for the Best Motion Picture of the Year, Best Performance by an Actor in a leading role and supporting role and Best Writing of an Adapted Screenplay, in the Academy Awards of 2012, the film is most notably known for its stellar performance from all star cast Brad Pitt, Jonah Hill and Phillip Seymour-Hoffman and it's exceptional screenplay adaptation by Academy Award winner Aaron Sorkin. The home entertainment release of the much anticipated film will give every fan the chance to relive the game with behind-the-scene special features and never before seen interviews with the Billy Beane - man behind the game.

Blu-ray Special Features:
All the features of the DVD plus:
Moneyball PS3 Wallpaper/Theme
Drafting The Team
Adapting "Moneyball"