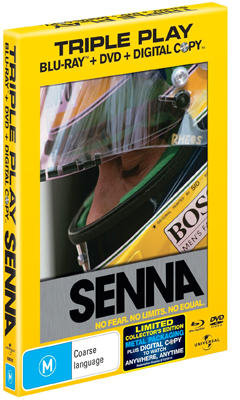 Spanning the decade from his arrival into Formula One in the mid 80's to the tragic events of Imola in 1994, the filmlength documentary follows Senna's struggles both on and off the track, and gives life to the man behind the helmet.

Directed by BAFTA award winning filmmaker, Asif Kapadia, and made with the full co-operation of the Senna family and Formula One Management, Senna is the first official documentary feature about his life, including astounding archive material, much of which is previously unseen.

A look into Senna's titanic Formula One career, the film charts his physical and spiritual journey, both on track and off; his quest for perfection and his ultimate transformation from a supremely gifted novice - three-times world champion, to myth - after his untimely death at age 34 on the blackest weekend in F1 history. Hailed in Brazil as a saint and considered to be the greatest driver who ever lived, through raw footage that has been carefully and artfully brought together - Senna uncovers not only the story of the legendary F1 driver, but of the humble, almost shy, and fiercely patriotic Ayrton Senna.

Available in standard definition DVD and in high definition Blu-ray - fans who purchase the Blu-ray edition will be able to experience an exclusive special extended version, which includes almost one hour of additional exclusive interviews including contributions from Alain Prost, Ron Dennis and others; providing even further insights into Senna's life andcareer.