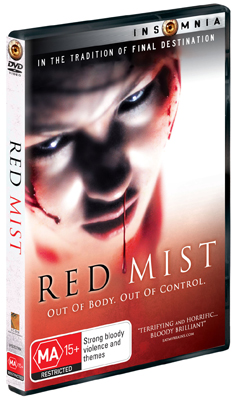 In the vein of I Know What You Did Last Summer, Red Mist guarantees a terrifying supernatural twist. Red Mist starts when a night of wild partying ends in disaster after janitor Kenneth falls into a drug-induced coma. Fearing their future reputations, a group of med students abandon his body outside a hospital. Racked by guilt, good girl Catherine (Arielle Kebbel) secretly attempts to revive him, but accidently administers a rare chemical allowing Kenneth to possess strangers' bodies and exact revenge on those who wronged him. Can Catherine find a cure before she's next? From the director of Shrooms, Red Mist is a relentless horror film with a hot young cast, plenty of gore and a whole lot of scares that will keep you up at night.