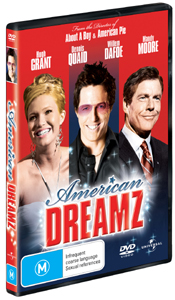 Imagine a country where the President never reads the newspaper, where the government goes to war for all the wrong reasons, and more people vote for a pop idol than their next President...

The black and white world of recently re-elected American President (Quaid) is turned upside down when he reads the paper for the first time in four years!

Concerned by the Presidents apparent nervous breakdown, his Chief of Staff (Dafoe) pushes him back into the spotlight as guest host on everyones favourite reality television show American Dreamz. With the egotistic and controversial judge Martin Tweed (Grant) on a mission to keep the ratings soaring, young hopefuls; the ambitious Sally (Moore) and wannabe star/terrorist in training Omer, fight their way to the final when the nation will watch a showdown they will never forget....

Directed by the widely talented Paul Weitz (American Pie, About a Boy), American Dreamz is an energetic, witty and comic commentary of the American entertainment phenomenon that is reality television.