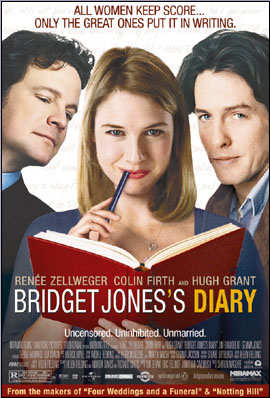 Renee Zellweger first charmed audiences as the young woman who wins over the heart of a self-absorbed Tom Cruise in the hit film Jerry Maguire. Now she's back as the slightly pump British self-titled character of the much anticipated Bridget Jones Diary. A much thinner Ms Zellweger talked to Paul Fischer in Los Angeles.

Renee Zellweger doesn't sound like a woman who had been talking enthusiastically to the press for the past four days. "It's the athlete in me that prepares me for this", the Texan native says with her slight Southern drawl in evidence. It is precisely her Texan heritage that may well have caused the Brits outrage when it was announced that this Hollywood star would dare assume the role of the very British and slightly plump Bridget Jones, in the film version of Bridget Jones's Diary. The actress - who is far from plump and British- laughs at the mention of controversy. "What controversy? I'm VERY excited about talking about that." The actress merely shrugs it off. After all, there are more important concerns she has, anyway. " You know what? I put so much pressure on myself for everything ELSE that I do, that it could not possibly exceed what was already there. In THIS case, I felt a responsibility to both Helen Fielding, [the author of the novel] because she created it, not me, and I did not want to blasphemies this beautiful character that she created." Zellweger loved this fictional character to such a degree that she didn't want "her to get lost in the translation."

But the controversy was still inherent in the minds of the British, for whom this novel had emerged as a cultural icon. The actress had to prove she could do it and thus decided to immerse herself in the mind and body of the fictional Bridget Jones. "So I moved to England, which was a big part of that process." It was an acting challenge, she says, little more. "The only thing hard about it was being away from home and loved ones and leaving the dog behind." But the characterisation, itself, she insists, was NOT hard. "It was a process, and so exciting to watch happen, because some of the stuff was slow in coming, but it was WORKING."

Zellweger had to gain weight for the role, because that "was an important part to me, because I wanted it to be legitimate." The actress remained consistently coy about what she did in order to gain the weight for the role, merely referring to that part of her preparation as "boringly technical." This despite the media's growing obsession with the actress's gaining and then loss of weight. Instead, Zellweger insists that both novel and film - that revolve around a young, insecure woman dealing with her life, work, eating habits and love - goes beyond the simplicity of a weight issue. "It's about a woman who has a self-image issue and it's a big part of the theme of the film" which includes weeding through society's "definitions of what beauty and success are, for this generation of women, and finding your OWN happiness, defining it for yourself and determining your OWN self-worth. Hers is a struggle that is inclusive of those things and not specific to her, alone in the world. It's about the theme
of self-acceptance."

Perhaps another magnet to this character was that it enabled this actress to re-evaluate her own self-worth in the Hollywood scheme of things. "I think it depends on how you define yourself and how you define your job as an actor. That's the fun part of it. It's fun to be a girl and play with that, dress up and become pretty sometimes. But I don't want to ever rely on that, I don't want that to be the core of what I depend on, in terms of my work experience. It frankly doesn't interest me. My experiences with physicality revolve pretty much more around lifestyle. Like any girl I want to take care of myself and in every respect. But physicality for me is more about a reflection of lifestyle and trying to maintain a particular energy level when you have to sit in a room and talk for three days."

She would rather travel extensively than sit in a hotel room talking to the press, and is looking forward to returning to Australia, where her father spent some of his formative years. "His parents led him there I think. I never really asked him if it had anything to do with the war or not, but that was something I reflected on recently, if it WAS the war that actually sent him to Australia, because he was a boy." He spent several years working as a lifeguard in Sydney's Cronulla Beach "and I believe his photo's on the wall there in his little trunks", she adds laughingly. Asked whether she intends visiting that old surf club she responds with immediate girlish enthusiasm. "Are you KIDDING? ABSOLUTELY!"

But she draws the line at taking to the Aussie surf, though. Well ANY surf if the truth were known. "I have a shark issue, ok? It's not about the surfing. The athletic appeal of it is beyond what I can express to you. But if there's ONE [shark] in the seven seas, that's enough, and I'm talking all oceans everywhere. It's not on my list of things to do, being a guy's snack."

No wonder she played Bridget Jones with singular vision. Renee Zellweger has cone a long way since Jerry Maguire; those cynical about her portrayal of Ms Jones may well be surprised at what they see.