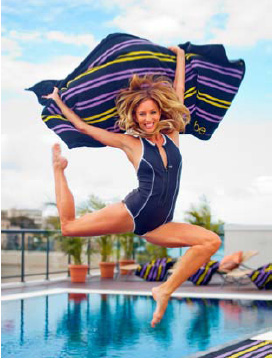 Renee Bargh is one of Australia's hottest emerging talents. In her short career she has already proved her versatility as a performer with hosting, modelling and pop careers behind her.

Currently based in L.A., Renee has just been announced as the new Weekend Co-host and Correspondent forExtra. She has been hard at work interviewing the likes of John Travolta, Usher, Bon Jovi and Justin Bieber.Back at home, Renee was one of Channel [V]'s most popular presenters. Renee was the co-host of 'What youWant', Channel [V]'s studio Countdown show, she has presented two series of B430, Channel V's youth Travelshow, taking her to Budapest, New Zealand, New York, L.A and the Whitsundays.

She has hosted numerous red carpet events, including the Aria's, The Astra Awards, movie premieres, theBig Day out, a ten hour broadcast from Sound Relief, Splendour in the Grass, Homebake and Good Vibes.Before joining Channel [ V ] in 2009 Renee's first hosting gig was on Channel Nine's surfing adventure series,Surfari. This was a dream job for Renee, cutting her teeth on the Getaway-style format, profiling the very bestsurfing locations around the Pacific.

Hailing from the beautiful Byron Bay, Renee relocated to Sydney to fulfill her dream of becoming a full-timeperformer. She graduated from Brent Street Performing Arts College, where she honed her skills as a dancer,singer and performer. Renee joined Girlband, releasing two well-received singles.

Her gorgeous looks and relaxed character make her a popular choice with producers. In addition to theextensive modelling and dancing jobs, she has appeared in numerous TV commercials and performed at theARIAs.

Renee Bargh's chic look and beach babe vibe made her the perfect choice as ambassador for Vibe Hotels'Summer Vibe Towel.

Made from high quality fabric, the bright and sophisticated lime, purple and black pattern of the Vibe Hotels'Summer Vibe Towel make it the hottest travel companion this summer, "it is the ultimate must-have in myholiday beach bag!" says Bargh.

The Summer Vibe Towel is available as part of an accommodation package including: overnightaccommodation, buffet breakfast for two, late check at midday and a Summer Vibe Towel. Prices start from$189 per night. It will also be available to purchase from the front desk of all Vibe Hotels across Australia, RRP:$30.00.*

*Vibe Hotel summer towel will be available from 1/11/2010 - 31/3/2011, towel and accommodation package subject to availability. Thedimensions of the towel are 80cms x 160cms. One towel per stay.