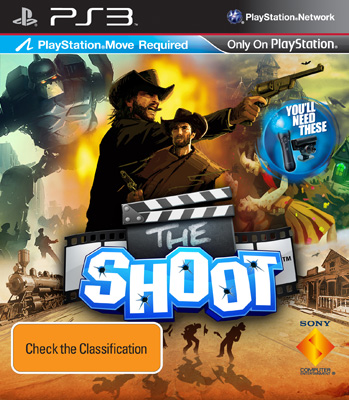 Be a real-life action movie hero in The Shoot™, a brand new title for PlayStation®3. Utilising the recently released Playstation®Move motion controller, players will be transported to an array of Hollywood-esque themed movie sets to see if they can shoot their way to the perfect take.

The Shoot challenges players to aim, fire and take down the enemy using the PlayStation Move motion controller. Players have to punch, duck and dodge their way through each take. Rather than having a number of lives the player has a number of takes with which to impress the director and critics so they can land more roles and have a shot at becoming an A-list movie star. Miss a shot or get injured and the director gets angry. Make the director angry enough and you'll be kicked off the set!

Battle against cowboys and miners, zombies and robots across a range of movie-sets including a western, a sci-fi-themed movie, a gangster movie, an underwater setting and a monster flick.

Players can perform a range of special moves including 'shockwave', 'showtime' and 'rampage'. There's also the option to join a friend in the two-player co-op action mode.

Each set is packed with extra ways to rack up a higher score, which makes The Shoot a game you can play again and again.

Don't just hit the target, act out the part for the camera!