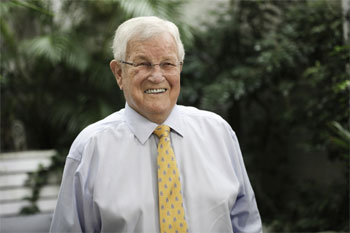 May 19 is World IBD Day, and this year the Gut Foundation is shining a spotlight on the two major -invisible diseases' that fall under the IBD banner – Crohn's disease and ulcerative colitis.

Australia has one of the highest incidence rates of IBD in the world, with approximately 1 in every 250 Australians affected. More than 75,000 Australians live with IBD, and this figure is expected to increase to 100,000 by 2022.

President and Founder of the Gut Foundation, Professor Terry Bolin, says, 'We don't know why Australians seem to be so badly affected by IBD. In fact, we don't really understand what causes IBD yet. We do know that there seem to be a combination of factors at play – there may be a genetic component, possibly there's a link to certain antibiotic use in childhood, and bacterial infections and viruses may also play a part. But more than that we're unsure of. Unfortunately, we're seeing more and more children diagnosed with IBD, so further research into the causes of IBD is vitally important."

IBD can affect different people in very different ways, with some sufferers able to manage their symptoms very effectively with medication, and others experiencing more frequent and painful symptoms.

'IBD is a relapsing and remitting condition, which means symptoms can come and go. While during a flare up a person may be very unwell, between flares they most likely feel fine, with no symptoms at all," explains Prof Bolin.

Roman was diagnosed with Crohn's disease almost 30 years ago, and had tried several different types of medications before finding one that worked effectively for him. He has now been receiving a transfusion of medication every eight weeks for the past 15 years, and has not had any Crohn's disease symptoms in that time.

'I make sure I look after myself, I stick to a well-balanced diet and avoid processed foods and too much junk, but I don't have to change the way I live. I'm definitely not eating kale for lunch every day or anything!" says Roman. 'I'm really lucky – the medication I'm on has completely eliminated my symptoms; I haven't had a flare up for years and years."

Conversely, Sylvia has had a much more traumatic experience. Diagnosed with Crohn's disease at age 13, Sylvia's condition was initially very mild, and her symptoms so insignificant that often she forgot she even had the condition. Because her IBD seemed so mild, Sylvia decided to stop taking her medication, and went seven years with no symptoms at all, completely un-medicated. However, a severe flare in 2015 ended with her having her entire large intestine removed in an emergency operation.

'It was truly horrific, and I have never been in so much pain or felt so frightened in my life," says Sylvia. 'I ended up with a temporary ileostomy bag, and I was in hospital for six weeks. Six months later I had to have another surgery (ileostomy reversal) and thankfully was able to be rid of the bag and my body began functioning somewhat normally again."

Professor Bolin says, 'Getting diagnosed early on and getting onto a medication that works effectively for you is crucial, as the longer there is inflammation present in the intestine, then the greater the risk of damage to the bowel."

Since this life-saving surgery, Sylvia has started a new medication that has put her symptoms into remission.

'Well-managed IBD shouldn't limit a person's life, and does not mean that they can't live a perfectly normal life," continues Prof Bolin. 'You need to monitor your IBD, keep it under control with medication and possibly some lifestyle changes, but other than that it doesn't need to have a tremendous impact."

Sylvia adds, 'My learning from all of this is that you need to take IBD incredibly seriously. It doesn't need to limit your life, but you do need to factor it into every part of your life - I don't think I ever really did, not to the extent I should have. I've now learnt that it's important that you don't judge the disease from how you may look or feel, even if you feel great. Monitor your symptoms consistently with doctors and specialists, talk about Crohn's, go to support groups. Ask questions, share information. This disease is a very real thing. And if you pretend it's not an issue it can take you completely off guard, like it did with me."

Roman says, 'I'd like other people with IBD to know that there are some incredible treatments available these days to help manage your condition. The right treatment can literally change your life. Finding a great doctor who understands the condition and is up on the latest treatment options is the first step, and then you might need to experiment until you find the treatment that works for you. But stay positive and know that there is something out there that can help you."

'There's nothing I can't do because of my Crohn's, it doesn't limit me in any way," finishes Roman.

The Gut Foundation urges anyone experiencing ongoing abdominal pain, diarrhoea, fever, fatigue, reduced appetite and blood in the stool to see their doctor for proper diagnosis and treatment. Prof Bolin is President and Founder of the Gut Foundation, and Associate Professor of Medicine at the University of New South Wales. He is also a Visiting Physician to the Gastrointestinal Unit at The Prince of Wales Hospital, in Sydney.


Question: Why do you think Australia has one of the highest incidence rates of IBD?

Professor Terry Bolin: We don't know why Australians seem to be so badly affected by IBD. In fact, we don't really understand what causes IBD yet. We do know that there seem to be a combination of factors at play – there may be a genetic component, possibly there's a link to certain antibiotic use in childhood, and bacterial infections and viruses may also play a part. But more than that we're unsure of. Unfortunately, we're seeing more and more children diagnosed with IBD, so further research into the causes of IBD is vitally important.


Question: What two major IBD conditions do you hope to raise awareness for?


Question: What is Crohn's disease?

Professor Terry Bolin: Crohn's disease is an inflammatory condition of the bowel that can occur in any part of the intestine. It is a life-long condition and can have a significant impact on every aspects of a person's life.


Question: And, what is ulcerative colitis?

Professor Terry Bolin: Similarly, ulcerative colitis is also an inflammatory condition of the bowel, however tends to typically affect the large intestine (colon).


Question: What are the symptoms associated with IBD conditions?

Professor Terry Bolin: Typical symptoms of IBD include painful abdominal cramps, frequent water diarrhoea, often with blood, severe urgency to have a bowel movement, fever during a flare up, loss of appetite and weight loss. Extreme fatigue and anaemia are also common symptoms. Many of these symptoms can be signs of other conditions, so it is very important to see your doctor for proper diagnosis and treatment.


Question: Is either of the major IBD conditions treatable with medication?

Professor Terry Bolin: Both Crohn's disease and ulcerative colitis can be effectively managed with medication in most cases. Medications need to be taken continuously, even when no symptoms are present, as this helps to reduce the frequency of flare ups and maintain the remission. IBD is a -relapsing and remitting' disease, which means symptoms can come and go, and people may feel perfectly fine during the periods of remission. However, patients need to stick to their medication regime even when they feel well, in order to minimise the damage to the bowel, which is permanent. In some cases surgical removal of all or parts of the intestine are required to remove the diseased tissue.


The Gut Foundation is hosting a Q&A session about IBD on its Facebook page from 12:30pm on Friday 19th May, where Professor Terry Bolin and Crohn's disease advocate Sylvia Keays will be answering all of your IBD-related questions. For more information about IBD please visit http://bit.ly/IBDResourcesForYou.