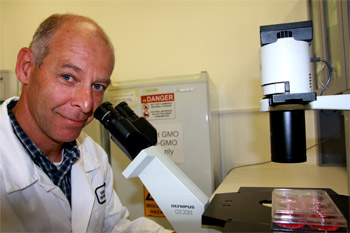 In a world-first, University of Sydney researchers have discovered one of the main reasons behind why cancer spreads throughout the body – with the help of -bad' cholesterol.

Published in leading international journal, Cell Reports, the research found -bad' cholesterol (Low Density Lipoprotein, or LDL) regulates the machinery that controls cell migration, a major finding in the search to explain why cancer spreads throughout the body.

'One of the things that makes cancer so difficult to treat is the fact that it can spread around the body," he said.

'Most of the cells in our bodies stick to neighbouring cells through the help of 'Velcro-like' molecules on their surface known as integrins. Unfortunately, integrins also help cancer cells that have broken away from a cancerous tumour to take root elsewhere in the body.

'Our study identified that -bad' (LDL) cholesterol controls the trafficking of tiny vessels which also contain these integrins, and this has huge effects on the ability of cancer cells to move and spread throughout the body.

'Our research found that having high amounts of -bad' cholesterol seem to help the integrins in cancer cells to move and spread.

'In contrast, we found that high levels of -good' (HDL) cholesterol keeps integrins inside cells and may therefore protect against cancer cell spread."

Researchers have extensively examined how integrins can move to the inside of cells. Most interestingly, out of several novel therapeutic opportunities, cholesterol, one of the major lipids in our body, is needed to keep integrins on the cell surface of cancer cells.

However, up to now it was unclear where this cholesterol was coming from and how one could manipulate this to treat cancer.

'Our findings contribute to the debate that cholesterol levels may be associated with cancer incidence," Associate Professor Grewal said.

'In fact, malignant cancer cells are known to take up increased amounts of -bad' LDL cholesterol.

'Our findings advance the theory that knowing how to manipulate and lower 'bad' cholesterol could significantly help to reduce the ability of cancer cells to spread."

Associate Professor Grewal has been collaborating with Professor Carlos Enrich from the University of  Barcelona (Faculty of Medicine) in Spain for 15 years on the link between cancer and cholesterol.

About cancer: In cancer, normal cells turn into cancer cells and can grow uncontrolled and form lumps called tumours. If left untreated, cancer cells can break away from the tumour and are carried to normal tissues nearby or other parts of the body. The ability of cancer cells to spread is life threatening because they can start to grow into new tumours.

Tumours from cancers that have spread are called secondary cancers or metastases. Cancer metastasis is one of the major issues that makes cancer so difficult and researchers have long recognised that a better understanding of cancer cell spread can provide opportunities to improve cancer treatment.

Most of the cells in our bodies stick to their neighbours through the help of 'Velcro-like' molecules on their surface known as integrins. But integrins also help cancer cells that have broken away from a tumour to settle elsewhere in the body. Knowing how to block integrins to stop cancer cells from moving can help to reduce cancer cell spread. Indeed, several pharmacological inhibitors for integrins have been developed, but these inhibitors still have limitations for clinical use.

Reducing the number of integrins at the cell surface stops cancer cell from migrating and invading other tissues and is one of the exciting therapeutic strategies investigated worldwide.

About the study: The Cell Reports publication is the culmination of five years of research and is a collaboration with researchers at the University of Sydney, the Garvan Institute, and researchers in Brisbane, Hamburg and Barcelona, as well as current PhD students in Professor Grewal's team.

These days, keeping your cholesterol levels in check does not only have to extend to avoiding certain rich foods...

Cholesterol - Are you at Risk?

Cholesterol is a fat, found in all animal cells. Pure cholesterol appears white and waxy. Cholesterol comes from...

We are finding out that it is not saturated fat or dietary cholesterol that increases the amount of the...

New research, led by Dr. Karin Ried of The University of Adelaide and the National Institute of Integrative...

Flora has launched a national health campaign in regards to cholesterol consumption; the aim of the campaign is...