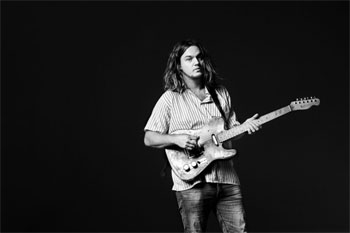 Fresh from a trifecta of rambunctious performances at BIGSOUND, Peter Bibby today announces a headline national tour in celebration of new single Medicine, out now via Spinning Top/Caroline. Beginning in Adelaide on Friday 6th October, Bibby will wander the nation armed with his first taste of new music since 2014.

Gearing up to release the follow-up to his debut, Bibby wrote Medicine whilst suffering an unstoppable lurgy. Not suitable for the squeamish, the accompanying visuals are a disturbing yet beguiling watch, the macabre scenes that unfold make it hard to tear your eyes from the screen.

Gallivanting across Australia and overseas, Peter Bibby has spent the last three years touring Butcher/Hairstylist/Beautician. Completing a co-headline national tour with Melody Pool late last year and recently supporting mates The Murlocs and The Peep Tempel, the songwriter has performed at the likes of Laneway Festival and SXSW. With a knack for distinctive songwriting, 2017 will see a whole new instalment of Bibby true-blue charm and storytelling, with further details revealed shortly.